The Official Finnish Charts (Finnish : Suomen virallinen lista, Swedish : Finlands officiella lista) are national record charts in Finland compiled and published by Musiikkituottajat – IFPI Finland. [1] The name Suomen virallinen lista/Finlands officiella lista (lit. "the Official Finnish Chart"), which is singular in both Finnish and Swedish, is used generically to refer to both the albums and the singles chart, and the context (albums or songs) reveals which chart is meant.

Finnish is a Uralic language of the Finnic branch spoken by the majority of the population in Finland and by ethnic Finns outside Finland. Finnish is one of the two official languages of Finland ; Finnish is also an official minority language in Sweden. In Sweden, both Standard Finnish and Meänkieli, a Finnish dialect, are spoken. The Kven language, a dialect of Finnish, is spoken in Northern Norway by a minority group of Finnish descent.

Swedish is a North Germanic language spoken natively by 10 million people, predominantly in Sweden, and in parts of Finland, where it has equal legal standing with Finnish. It is largely mutually intelligible with Norwegian and to some extent with Danish, although the degree of mutual intelligibility is largely dependent on the dialect and accent of the speaker. Written Norwegian and Danish are usually more easily understood by Swedish speakers than the spoken languages, due to the differences in tone, accent and intonation. Swedish is a descendant of Old Norse, the common language of the Germanic peoples living in Scandinavia during the Viking Era. It has the most speakers of the North Germanic languages. While being strongly related to its southern neighbour language German in vocabulary; the word order, grammatic system and pronunciation are vastly different.

A record chart, also called a music chart, is a ranking of recorded music according to certain criteria during a given period of time. Many different criteria are used in worldwide charts, often in combination. These include record sales, the amount of radio airplay, the number of downloads, and the amount of streaming activity.

The first charts were published in 1951. In January 1991, the Yle radio station Radiomafia started to compile the first weekly chart in Finland called Radiomafian lista, which was broadcast on the radio every Sunday. Prior to that, all singles and album charts in Finland had been either monthly or biweekly published sales charts. [2] Radiomafian lista became the official Finnish charts in January 1994 when they began a partnership with Suomen Ääni- ja kuvatallennetuottajat (ÄKT) (now known as Musiikkituottajat – IFPI Finland), the umbrella organization of recording producers active in Finland. Simultaneously, they began to publish the first weekly published singles chart based on sales in Finland, as well as a chart for studio and compilation albums. [3] This move effectively killed the competition from the other chart compilers and by 1995, the Official Finnish Charts were the only sales charts published in Finland.

Yleisradio Oy (Finnish), literally General Radio or General Broadcast; Swedish: Rundradion; abbr. Yle, is Finland's national public broadcasting company, founded in 1926. It is a public limited company which is 99.98% owned by the Finnish state, and employs around 3,200 people in Finland. Yle shares many of its organizational characteristics with its UK counterpart, the BBC, on which it was largely modelled.

Radiomafia was a Finnish radio station owned by Yle and mainly directed to teenagers and young adults. It was established on June 1, 1990 and decommissioned on January 12, 2003. It was followed by YleX, with some of the programmes moved to other channels, such as YleQ, Yle Radio Suomi and Yle Radio 1.

Presently the following weekly charts are composed and published by Musiikkituottajat, according to sales and streaming: [4] [5]

The Official Charts Company, also referred to as Official Charts is a British inter-professional organisation that compiles various "official" record charts in the United Kingdom, including the UK Singles Chart, the UK Albums Chart, the UK Singles Downloads Chart and the UK Album Downloads Chart, as well as genre-specific and music video charts. The OCC produces its charts by gathering and combining sales data from retailers through market researchers Millward Brown, and claims to cover 99% of the singles market and 95% of the album market, and aims to collect data from any retailer who sells more than 100 chart items per week.

"Jos mä oon oikee" song by Finnish singer-songwriter Sanni and the second single from her debut studio album Sotke mut. It was released on 18 June 2013 through Warner Music Finland. The song's music video was published on 4 July 2013 and was filmed in Helsinki. The song peaked at number nineteen on Finland's airplay and downloads charts, but did not chart on their singles chart. 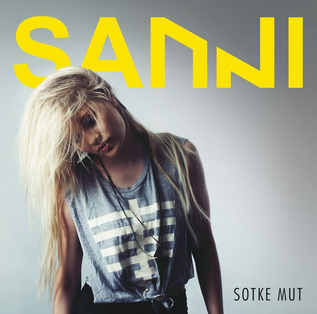 Sotke mut is the debut studio album by Finnish singer-songwriter Sanni. It was released on September 20, 2013 by Warner Music Finland and was produced by Hank Solo. The album peaked at number-nine on the Finnish albums charts, and includes the top ten singles "Prinsessoja ja astronautteja" and "Me ei olla enää me". It has since been certified platinum by Musiikkituottajat after selling over 20,000 copies. 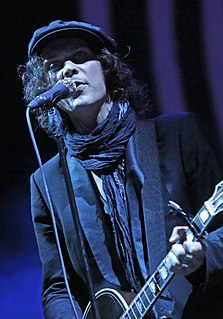 The discography of Finnish singer-songwriter and musician Ville Valo consists of one studio album, two video game soundtracks, four singles and three music videos. He has also been featured on four singles by other artists, and made contributions to numerous other releases.