Oriental Land pays The Walt Disney Company for character and likeness licenses and royalties while Disney consults and contracts out Imagineers to the company to design and build the theme parks and attractions at the resort. The Oriental Land Company is the only Disney Resort business company in the world that has no capital relationship with Disney.

The Oriental Land Company was founded in 1960. [1] The company was developing Maihama, an area of land in Urayasu that was created through land reclamation. [5] Two years later, the company contacted Disney about building a theme park. [6] OLC was also building a few shopping centers in Chiba Prefecture. [5]

Even though the Disney Stores maintained strong sales, mounting cost of sales and operation and the loss of key executives who had driven the Disney Stores to success led The Walt Disney Company to convert the Disney Stores into a licensed operation. The Japanese stores were sold to the company in April 2002 and placed into Retail Networks Co., Ltd. subsidiary. [14] [15]

In October 2008, Oriental Land Company announced that it and Disney had shelved plans for a new Disney complex in a major Japanese city. The company and Disney had spent more than a year studying an urban-style amusement facility for 2010 or later, but ended planning due to low profits expected versus the investment. The firm said it would continue to explore possibilities for a new business, which might not involve Disney. [16] 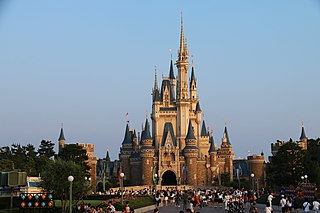 The Tokyo Disney Resort is a theme park and vacation resort located in Urayasu, Chiba, Japan, just east of Tokyo. The resort is fully owned and operated by The Oriental Land Company under a license from The Walt Disney Company, who constructed and designed the resort and its various attractions.

Urayasu is a city located in Chiba Prefecture, Japan. As of 1 November 2020, the city had an estimated population of 170,533 in 81,136 households and a population density of 9,900 inhabitants per square kilometre (26,000/sq mi). The total area of the city is 17.30 square kilometres (6.68 sq mi). Urayasu is best known as the home of the Tokyo Disney Resort, which opened in April 1983, and the headquarters of The Oriental Land Company. 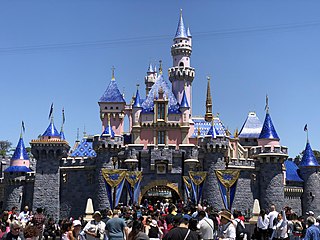 The Disneyland Resort, commonly known as Disneyland, is an entertainment resort in Anaheim, California. It is owned and operated by The Walt Disney Company through its Parks, Experiences and Products division and is home to two theme parks, three hotels, and a shopping, dining, and entertainment district known as Downtown Disney. 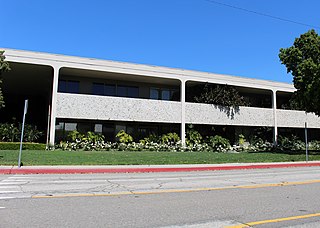 Walt Disney Imagineering Research & Development, Inc., commonly referred to as Imagineering, is the research and development arm of The Walt Disney Company, responsible for the creation, design, and construction of Disney theme parks and attractions worldwide. The company also manages The Walt Disney Company's properties, from Walt Disney Studios in Burbank to New Amsterdam Theatre and Times Square Studios Ltd. in New York City. Founded by Walt Disney to oversee the production of Disneyland, it was originally known as Walt Disney, Inc. then WED Enterprises, from the initials meaning "Walter Elias Disney", the company co-founder's full name. Headquartered in Glendale, California, Imagineering is composed of "Imagineers", who are illustrators, architects, engineers, lighting designers, show writers and graphic designers.

Disney Parks, Experiences and Products, Inc., formerly Walt Disney Parks and Resorts Worldwide, Inc. and informally known as Disney Parks, is one of The Walt Disney Company's six major business segments and a subsidiary. It was founded on April 1, 1971, exactly six months before the opening of Magic Kingdom at Walt Disney World Resort in Bay Lake, Florida, just outside of Orlando.

Ed Grier is the dean of the Virginia Commonwealth University School of Business. Before coming to VCU, he was an executive at The Walt Disney Company.

Walt Disney Attractions Japan is a wholly owned subsidiary of Disney Parks, Experiences and Products, one of four sectors of the American entertainment conglomerate The Walt Disney Company.

The Disney Resort Line, officially called Dizunī Rizōto Rain-sen, is an automated monorail in Japan, which operates between Maihama Station and the Tokyo Disney Resort. The system is operated by Maihama Resort Line Co., Ltd., the subsidiary of Oriental Land Co., Ltd. that operates the resort. 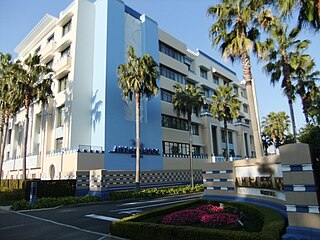 The Disney Ambassador Hotel was the first Disney-branded hotel built at Tokyo Disney Resort in Urayasu, Chiba, Japan. It opened on July 20, 2000 and was constructed under a license by The Walt Disney Company. The hotel is managed by The Oriental Land Company. 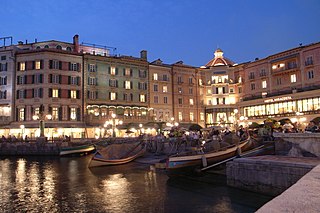 The Tokyo DisneySea Hotel MiraCosta was the second hotel built at Tokyo Disney Resort in Urayasu, Chiba, Japan. It opened on September 4, 2001 alongside the opening of the Tokyo DisneySea theme park. It was constructed under a license by The Walt Disney Company. The hotel is managed by The Oriental Land Company.

Maihama Station is a railway station in Urayasu, Chiba, Japan, operated by East Japan Railway Company. It is most well known for being the main railway access point for the Tokyo Disney Resort.

Shanghai Disney Resort is a themed resort in Pudong, Shanghai, China. It is the first Disney park resort in mainland China and the second in China, after the Hong Kong Disneyland Resort. The resort opened to the public on June 16, 2016. 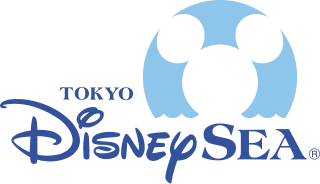 Tokyo DisneySea is a theme park at the Tokyo Disney Resort located in Urayasu, Chiba Prefecture, Japan, just outside Tokyo. It opened on 4 September 2001, at a cost of 335 billion yen. The Oriental Land Company owns the park, and licenses Disney characters and themes from The Walt Disney Company. With a size of 176-acre (71.22 ha), Tokyo DisneySea attracted nearly fifteen million visitors in 2018, making it the fourth-most-visited theme park in the world. 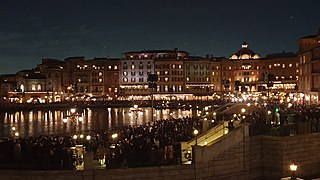 Mediterranean Harbor is a themed land in Tokyo DisneySea, the second park in the Tokyo Disney Resort, located in Urayasu, Chiba, Japan, near Tokyo, which opened in 2001. Mediterranean Harbor is the entrance "port-of-call," or hub, themed as an Italian port city named Porto Paradiso, complete with Venetian gondolas that guests can board and ride. The majority of places of interest throughout the port are various shops and restaurants. 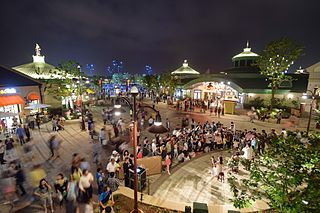 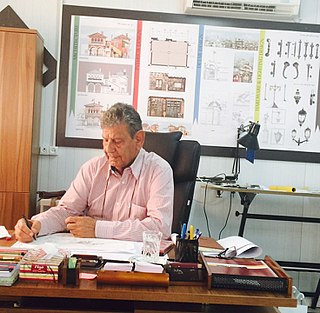 Ahmad Jafari is an architect based in USA. He is a veteran architect whose career extends over 6 decades. He was with Disney Imagineering as an Architect and Art Director from 1966 to 2004 and has worked alongside Walt Disney and many Disney Legends. In 2006, he received the NFFC Disney Legend awards.