The Sail and Steam Navy List: All the Ships of the Royal Navy 1815–1889 by Rif Winfield and David Lyon is a historical reference work providing details of all recorded ships in commission or intended to serve in the Royal Navy from 1815 to 1889. Where available in Admiralty records (from which all the data is sourced), it gives the location of construction, dates of construction (ordering, keel laying, launch and commissioning), principal dimensions and tonnage, armament, machinery (for steam vessels) and fate of every ship of the Royal Navy over the period.

David Lyon's The Sailing Navy List: All the Ships of the Royal Navy, Built, Purchased and Captured, 1688-1860 had been published in 1993, a ground-breaking study of the sailing vessels of the Royal Navy from the Glorious Revolution of 1688 until the close of the Age of Sail. He had planned a follow-up on the ships of the Royal Navy in the era of transition from sail to steam power, and began work in preparation for that volume. This was cut short by his death in a diving accident during 2000 in the Bahamas (he was an enthusiastic underwater archaeologist). Shortly after his death, his colleague Rif Winfield, author of the best-selling Fifty Gun Ship , and subsequently the author of a series of volumes under the heading British Warships in the Age of Sail, took over David's accumulated notes, added them to his own extensive research on Royal Naval warships, and carried on this work to produce what the Journal for Maritime Research described as

the most comprehensive and accurate work on all the ships built and projected for the Royal Navy between 1815 and 1889; indeed up until now there was no single, comprehensive listing of the ships of this period and their essential characteristics

The book is a valuable reference work and the only complete single-volume published record for ships of the late Georgian era (1714-1837) and of the early (1837-1860) and middle (1860-1889) Victorian Royal Navy. Rif Winfield's subsequent four-volume British Warships in the Age of Sail series has expanded this material to incorporate all vessels of the British (before 1704, English) Navy between 1603 and 1863, and incorporated the results of extra research since the publication of their Sail and Steam Navy List.

HMS Enterprise was a 24-gun sixth-rate of the French Navy captured by HMS Triton on 7 May 1705. She was registered as a Royal Navy ship on 1 June 1705 and commissioned shortly afterwards. She served in the Mediterranean and with Admiral Byng's squadron at the Downs, She was wrecked in 1707 with the loss of all hands.

HMS Prince of Wales was one of six 121-gun screw-propelled first-rate three-decker line-of-battle ships of the Royal Navy. She was launched on 25 January 1860.

HMS Sir Isaac Brock was a warship which was destroyed before being completed at York, Upper Canada during the War of 1812. The ship was named after the famed hero of the war, Major General Sir Isaac Brock. 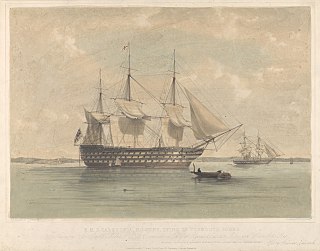 HMS Caledonia was a 120-gun first-rate ship of the line of the Royal Navy, launched on 25 June 1808 at Plymouth. She was Admiral Pellew's flagship in the Mediterranean.

Caledonia was a British brig which saw service on the Great Lakes during the War of 1812. Caledonia was built in Malden in Upper Canada for the North West Company, and launched in 1807. During the early part of the War, the vessel was commandeered by the Provincial Marine, and played an important part in the Siege of Fort Mackinac, carrying troops and guns to the island.

HMS Montague was a 74-gun third rate ship of the line of the Royal Navy, launched on 28 August 1779 at Chatham Dockyard.

The Alfred-class ships of the line were a class of four 74-gun third rates for the Royal Navy by Sir John Williams. They were an enlarged version of the Royal Oak class.

USS Lady Prevost was a schooner captured from the British during the War of 1812 and pressed into use in the United States Navy.

HMS Mercury was one of two Iris-class despatch vessels, later redesignated as second class cruiser built for the Royal Navy during the 1870s. The two ships were the first all-steel warships in the Royal Navy. 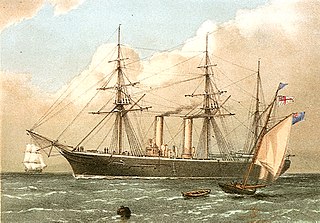 HMS Iris the lead ship of her class of two ships built for the Royal Navy in the 1870s. They were the first all-steel warships to serve with the Royal Navy.

HMS Halifax was a ship-rigged sloop of the Merlin class built in 1806 for the British Royal Navy at the Naval Yard in Halifax, Nova Scotia. Built to fill a pressing need for coastal patrol sloops on the North American Station, Halifax was one of the few warships built at Halifax Naval Yard in the Age of Sail as the yard's primary function was supply and refit.

British Warships in the Age of Sail is a series of four books by maritime historian Rif Winfield comprising a historical reference work providing details of all recorded ships that served or were intended to serve in the (British) Royal Navy from 1603 to 1863. Similar volumes dealing with other navies during the Age of Sail have followed from the same publisher.

HMS Newcastle was a wooden screw frigate, the fifth ship of the name to serve in the Royal Navy. 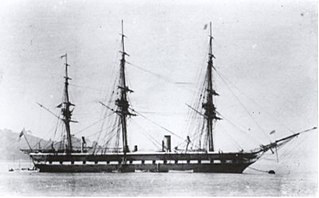 HMS Undaunted was a wooden screw frigate, the fifth ship of the name to serve in the Royal Navy.

Post ship was a designation used in the Royal Navy during the second half of the 18th century and the Napoleonic Wars to describe a ship of the sixth rate that was smaller than a frigate, but by virtue of being a rated ship, had to have as its captain a post captain rather than a lieutenant or commander. Thus ships with 20 to 26 guns were post ships, though this situation changed after 1817.

A number of ships of the Royal Navy have borne the name HMS Dee, after one or other of the British rivers called the Dee. 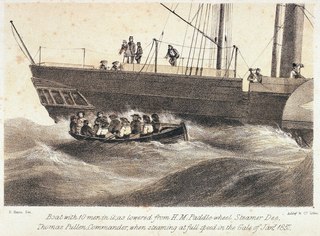 HMS Dee was the first paddle steamer ordered for the Royal Navy, designed to carry a significant armament. She was ordered on 4 April 1827 from Woolwich Dockyard. She was designed by Sir Robert Seppings, Surveyor of the Navy and modified by Oliver Lang. This vessel was considered as new construction as a previous vessel ordered as a flush deck Cherokee-class brig in 1824, had been renamed African in May 1825. She was initially classed as a steam vessel (SV), and in 1837 reclassified as a steam vessel class 2 (SV2). She was converted to a troopship in May 1842 and as a second class sloop in 1846. She was converted into a storeship in 1868. She was broken at Sheerness in 1871.

HMS Megaera was a Hermes-class wooden paddle sloop of the Royal Navy. She was built at Sheerness Dockyard. She was launched in 1837 and served two commissions before being wrecked at Jamaica in 1843.