The Shadow of the Wind

The Shadow of the Wind (Spanish : La sombra del viento) is a 2001 novel by the Spanish writer Carlos Ruiz Zafón and a worldwide bestseller. The book was translated into English in 2004 by Lucia Graves and sold over a million copies in the UK after already achieving success on mainland Europe, topping the Spanish bestseller lists for weeks. It was published in the United States by Penguin Books and in Great Britain by Weidenfeld & Nicolson and Orion Books. It is believed to have sold 15 million copies worldwide, [1] making it one of the best-selling books of all time.

The novel is actually a story within a story. [2] In the story-world "The Shadow of the Wind" is a novel by the obscure Catalan author Julián Carax. A boy, Daniel Sempere, sets out to discover Julián's other works, and becomes involved in tracing the entire history of Carax. Daniel's friend, who goes by the alias of Fermín Romero de Torres, was imprisoned and tortured in Montjuïc Castle as a result of his involvement in espionage against the government during the Civil War. He helps Daniel in a number of ways, but their probing into the murky past of a number of people who have been either long dead or long forgotten unleashes the dark forces of the murderous Inspector Fumero.

Thus, unravelling a long story that has been buried in the depths of oblivion, Daniel and Fermín come across a love story, the beautiful yet tragic story of Julián and Penélope, both of whom seem to have been missing since 1919—that is, nearly thirty years earlier. Julián, who was the son of the hatter Antoni Fortuny and his wife Sophie Carax (but preferred to use his mother's last name), and Penélope Aldaya, the only daughter of the extremely wealthy Don Ricardo Aldaya and his beautiful, narcissistic American wife, developed an instant love for each other and lived a clandestine relationship only through casual furtive glances and faint smiles for around four years, after which they decided to elope to Paris, unaware that the shadows of misfortune had been closing in on them ever since they had met. The two lovers are doomed to unknown fates just a week before their supposed elopement, which is meticulously planned by Julián's best friend, Miquel Moliner—also the son of a wealthy father, who had earned much during the war, including a bad reputation for selling ammunition. It is eventually revealed that Miquel loved Julián more than any brother and finally sacrificed his own life for him, having already abandoned his desires and his youth for causes of charity and his friend's well-being after his elopement to Paris -- although without Penélope, who never turned up for the rendezvous.

Penélope's memory keeps burning in Julián's heart, and this eventually forces him to return to Barcelona (in the mid 1930s); however he encounters the harsh truth about Penélope, nothing more than a memory to those who knew her since she had never been seen or heard of again by anyone after 1919. Daniel discovers, from the note Nuria Monfort left for him, that Julián and Penélope are actually half-brother and sister; her father had an affair with his mother and Julián was the result. The worst thing he learns is that after Julián left, Penélope's parents imprisoned her because they were ashamed of her committing incest with him and she was pregnant with his child. Penélope gave birth to a son named David Aldaya, who was stillborn. Penélope died in childbirth, due to her parents' ignoring her cries for help, and her body was placed in the family crypt along with her child's. When returning to the Aldaya Mansion, Julián is enraged and embittered by the news of his love's death along with their child's. He hates every wasted second of his life without Penélope and hates his books all the more. He begins to burn all of his novels and calls himself Lain Coubert.

After finishing reading the book, Daniel marries Beatriz "Bea" Aguilar, whom he has loved for a long time, in 1956. Soon after, Bea gives birth to a son. Daniel names his son Julián Sempere, in honor of Julián Carax. In 1966, Daniel takes Julián to the Cemetery of Forgotten Books, where The Shadow of the Wind is kept.

The novel received positive to mixed reviews from literary critics. [3] [4] [5] Stephen King wrote, "If you thought the true gothic novel died with the 19th century, this will change your mind. Shadow is the real deal." [6] Entertainment Weekly assigned the book a grade of A, describing the book as "wondrous" and noting that "there are places in which the book might seem a little over-the-top (doomed love, gruesome murders) but for Zafon's masterful, meticulous plotting and extraordinary control over language". [7] The Guardian considered that "Zafón's novel is atmospheric, beguiling and thoroughly readable, but ultimately lacks the magic its early chapters promise". [8] 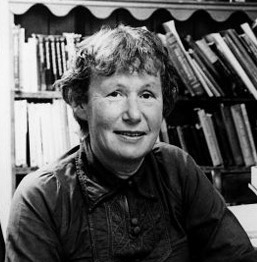 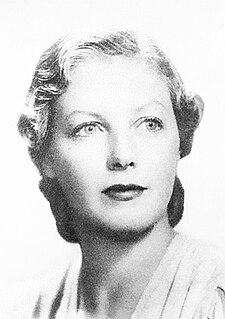 Mary Margaret ('Mollie') Kaye was a British writer. Her most famous book is The Far Pavilions (1978). 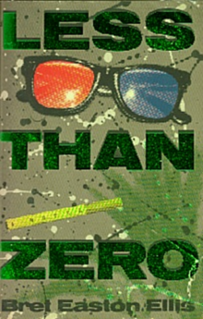 Less Than Zero is the debut novel of Bret Easton Ellis, published in 1985. It was his first published effort, released when he was 21 years old and still a student at Bennington College. The novel was titled after the Elvis Costello song of the same name.

Bridget Jones is a fictional character created by British writer Helen Fielding. Jones first appeared in Fielding's Bridget Jones's Diary column in The Independent in 1995, which - crucially - did not carry any byline. Thus, it seemed to be an actual personal diary chronicling the life of Jones as a thirtysomething single woman in London as she tries to make sense of life, love, and relationships with the help of a surrogate "urban family" of friends in the 1990s. The column was, in fact, a lampoon of women's obsession with love, marriage and romance as well as women's magazines such as Cosmopolitan and wider social trends in Britain at the time. Fielding published the novelisation of the column in 1996, followed by a sequel in 1999 called Bridget Jones: The Edge of Reason.

The House of Eliott is a British television series produced and broadcast by the BBC in three series between 1991 and 1994. The series starred Stella Gonet as Beatrice Eliott and Louise Lombard as Evangeline Eliott, two sisters in 1920s London who establish a dressmaking business and eventually their own haute couture fashion house, and Aden Gillett as photographer and film maker Jack Maddox. It was created by Jean Marsh and Eileen Atkins, who had previously devised Upstairs, Downstairs. The series was written by several writers, including Jill Hyem, Peter Buckman, Deborah Cook and Ginnie Hole. 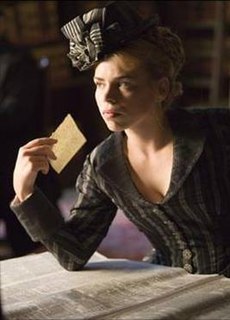 Veronica Beatrice "Sally" Lockhart is a fictional character in a series of books by Philip Pullman. 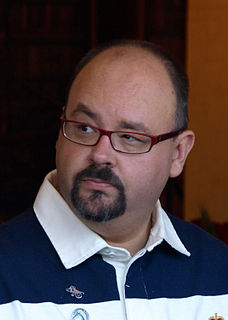 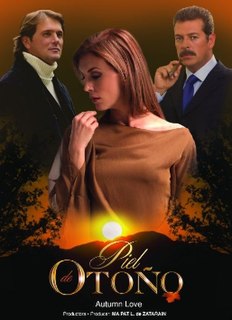 María la del Barrio is a Mexican telenovela produced by Angelli Nesma Medina for Televisa in 1995. The series is a remake of Los Ricos También Lloran. María la del Barrio is considered one of the world's most popular and successful shows ever, having been broadcast in over 180 countries. It is the last part of the Trilogía de las Marías.

Fire and Ice is a children's fantasy novel, the second book in the Warriors series, written by Kate Cary under the pen name of Erin Hunter. The plot centers around Fireheart and Graystripe, newly promoted warriors of ThunderClan, which is one of the four groups of feral cats living in the wilderness. Fireheart learns that his best friend Graystripe has fallen in love with Silverstream, a warrior from RiverClan, even though it is against the cats' "warrior code". 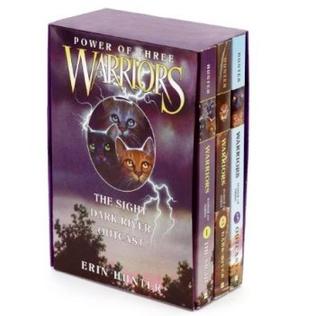 Warriors: Power of Three is the third arc in the Warriors juvenile fantasy novel series about anthropomorphic feral cats. The arc comprises six novels which were published from 2007 to 2009: The Sight, Dark River, Outcast, Eclipse, Long Shadows, and Sunrise. The novels are published by HarperCollins under the pseudonym Erin Hunter, which refers to authors Kate Cary, Cherith Baldry, Tui Sutherland and plot developer/editor Victoria Holmes. Power of Three details the experiences of protagonist of the first series Firestar's three grandchildren, initially known as Jaykit, Hollykit, and Lionkit, whom a prophecy foretells will have "the power of the stars in their paws". The arc's major themes deal with forbidden love, the concept of nature versus nurture, and characters being a mix of good and bad. Though the novels have appeared on the New York Times Bestseller List and have been nominated for several awards, none of the novels in Warriors: Power of Three have won a significant literary award.

The Luxe is a 2007 young adult novel by author Anna Godbersen. It follows the lives of two upper class sisters in Manhattan during 1899. There are four books in the Luxe series including Luxe, Rumors, Envy, and Splendor. 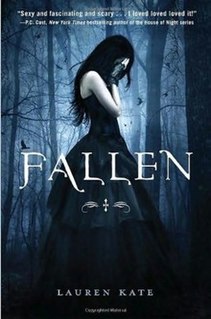 Fallen is the first novel in the Fallen series written by Lauren Kate. It is a young adult, fantasy, paranormal romance published in 2009 under Delacorte Press. The novel revolves around a young girl named Lucinda Price who is sent to Sword & Cross Reform School in Savannah, Georgia, after she is accused of murdering a boy by starting a fire. At the reform school, she meets Daniel, a handsome boy whom she feels inexplicably drawn to, and believes that she has already met before. The book revolves mostly around the concept of religion, fallen angels and reincarnation.

The Dark Artifices is a trilogy written by Cassandra Clare. The series is chronologically the fourth series in The Shadowhunter Chronicles and a sequel to The Mortal Instruments. It is set in Los Angeles. The series consists of three books: Lady Midnight, Lord of Shadows and Queen of Air and Darkness, in that particular order. Centered around the protagonist, Emma Carstairs, the series follows her journey as a Shadowhunter at the Los Angeles Institute, and her life with her best-friend and parabatai, Julian Blackthorn, and his family. The series is about a sacred bond of "parabatai", two bonded Shadowhunters, and it is more valuable than any bond in this world. This bond makes the two more powerful and strong, but there is only one drawback - it is forbidden to fall in love with your parabatai. It so happens that Emma and Julian, two parabatai, have fallen in love. The Dark Artifices is a trilogy about their struggle against their enemies and how the two protagonists deal with their forbidden love and the resulting consequences. The series is told from the point-of-view of the various different characters in the story.

Smart Girls Get What They Want is a 2012 young adult fiction novel by Sarah Strohmeyer. It was published on June 26, 2012 by Balzer + Bray, an imprint of HarperCollins. 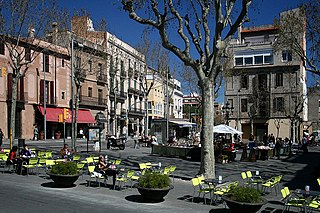