The Sweetness of Loving

The Manifesto of the 121 was an open letter signed by 121 intellectuals and published on 6 September 1960 in the magazine Vérité-Liberté. It called on the French government, then headed by the Gaullist Michel Debré, and public opinion to recognise the Algerian War as a legitimate struggle for independence, denouncing the use of torture by the French army, and calling for French conscientious objectors to the conflict to be respected by the authorities. 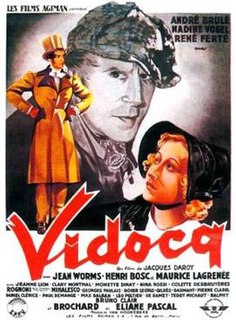 Vidocq is a 1939 French historical crime film directed by Jacques Daroy and starring André Brule, Nadine Vogel and René Ferté. The film is based on the memoirs of Eugène François Vidocq. Vidocq was a criminal in nineteenth century Paris who changed sides and became a leading detective.

The Ideal Couple is a 1946 French comedy film directed by Bernard-Roland and Raymond Rouleau and starring Raymond Rouleau, Hélène Perdrière and Denise Grey. 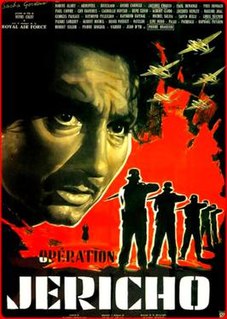 Jericho is a 1946 French war film directed by Henri Calef based on Operation Jericho. During the Second World War the Royal Air Force and the French Resistance take part in a joint operation known as "Jericho" to free fifty civilians being held as hostages by the occupying German Army in Amiens.

No Pity for Women is a 1950 French mystery film directed by Christian Stengel and starring Simone Renant, Michel Auclair and Marcel Herrand. It was adapted by Jean Giltène from his own novel. The film's art direction was by Robert Hubert.

Clara de Montargis is a 1951 French drama film directed by Henri Decoin and starring Ludmilla Tchérina, Michel François and Roland Armontel. The film's sets were designed by the art director René Renoux. It was made at the Studio d'Epinay in Paris. 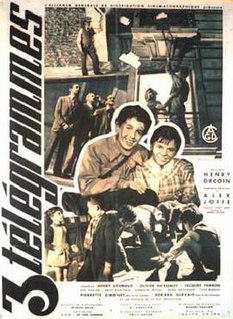 Three Telegrams is a 1950 French drama film directed by Henri Decoin and starring Gérard Gervais, Pierrette Simonet and Olivier Hussenot. The film's art direction was by Auguste Capelier. It was made at the Billancourt Studios in Paris.

Renée Passeur was a French actress and singer. Extravagant personality of the so-called Tout-Paris, Renée Passeur embodied eccentric characters in films. She was the spouse of author and screenwriter Steve Passeur (1899-1966). 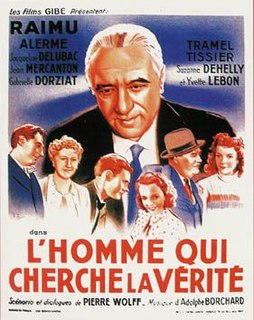 The Man Who Seeks the Truth is a 1940 French comedy film directed by Alexander Esway and starring Raimu, Yvette Lebon and André Alerme. In 1945, it was loosely remade in Hollywood as Bring on the Girls.

Our Lord's Vineyard is a 1932 French comedy film directed by René Hervil and starring Victor Boucher, Simone Cerdan and Victor Garland. It was based on a play of the same title by Francis de Croisset and Robert de Flers. The film was remade in 1958, starring Fernandel.

Colette the Unwanted is a 1927 French silent film directed by René Barberis.

The Husbands of Leontine is a 1947 French comedy film directed by René Le Hénaff and starring Jacqueline Gauthier, Pierre Jourdan and Gil Roland.

The Red Dancer is a 1937 French drama film directed by Jean-Paul Paulin and starring Véra Korène, Maurice Escande and Jean Worms. The film's sets were designed by the art director Alexandre Lochakoff.

The Cupid Club is a 1949 comedy crime film directed by Marc-Gilbert Sauvajon and starring Pierre Blanchar, Simone Renant and Yves Vincent. It was shot during 1948, but released the following year. It was made at the Photosonor Studios in Paris, with sets designed by the art director Eugène Delfau.