The Thunder (Chinese :破冰行动; pinyin :Pòbīng xíngdòng) is a 2019 Chinese web television series based on the actual events of Chinese authorities' raid of Boshe village in Guangdong province on December 2013.[ citation needed ] The series released on the Chinese streaming website iQiyi on 7 May 2019, followed by the television premiere on CCTV-8 three days later.

Filming of the series took placed in Guangdong, Hong Kong, Macau, France and Japan during March and August 2018, with over thousands of police personnel took part in filming process. [1]

Wang Kaihao of the China Daily says the series bears resemblance of Breaking Bad , the fictional American series that compared to the actual event. [2]

The Huading Awards are a set of entertainment awards in China. The awards were set up by Tianxia Yingcai Cultural Media Co., LTD in 2007 in Beijing and are held more than once each year across multiple entertainment media from Chinese television shows to international films and music.

Nirvana in Fire is a 2015 Chinese historical drama based on Hai Yan's book Lang Ya Bang (瑯琊榜). It was directed by Kong Sheng and Li Xue, and stars Hu Ge, Liu Tao and Wang Kai as Mei Changsu, Princess Nihuang and Prince Jing. The series tells the story of Lin Shu, who, under the alias Mei Changsu, enters the capital of Liang to seek justice for a conspiracy that labeled his family as traitors 12 years before. It originally aired two episodes daily on Beijing TV and Dragon TV, Monday through Sunday from 19:30 to 21:00, from September 19 to October 15, 2015. 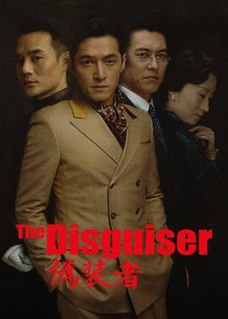 The Disguiser is a 2015 Chinese spy war television drama based on Zhang Yong's novel, Spy War on Shanghai Bund (諜戰上海灘). It was produced by Hou Hongliang and directed by Li Xue, and stars Hu Ge, Jin Dong, Liu Mintao and Wang Kai as the members of the Ming family. The series tells the story Ming Tai, a rich and naive young master of the Ming household, who is trained to become a spy for the Kuomintang to fight Wang Jingwei’s leadership of Japan’s puppet regime in China. It originally aired daily on Hunan Television from 31 August to 28 September 2015.

Jackson Yee is a Chinese actor, dancer and singer. After a talent manager discovered him at a children talent competition, where he performed a hip-hop dance, and signed to TF Entertainment, Yee became the youngest member of the Chinese boy band TFBoys in 2013.

Magnolia Award for Best Actor is awarded under the Shanghai Television Festival.

Magnolia Award for Best Actress is awarded under the Shanghai Television Festival.

All Is Well is a Chinese television series that premiered on Zhejiang Television and Jiangsu Television on March 1, 2019. The series is directed by Jian Chuanhe, and stars Yao Chen, Ni Dahong, Guo Jingfei, Li Nian, Tony Yang, Gao Xin, and Gao Lu. It is an adaptation of Ah Nai's novel, which shares the same title as the show. The series depicts the conflicts and struggles of a white-collar worker and her family members.

Zhou Shen, also known as Charlie Zhou, is a Chinese singer. He is best known for his song "Big Fish", which has won 8 awards. In November 2017, Zhou released his debut album 深的深, a co-creation with producer Gao Xiaosong, songwriter Yin Yue, and composer Qian Lei. He has performed for many TV series and Chinese animation films such as Big Fish & Begonia, Dahufa, and Crystal Sky of Yesterday, among others. In March 2018, Zhou sang the Chinese promotional song for the 2018 Oscar Best Picture The Shape of Water. In 2020, Zhou Shen won first place for his performance of the song "Da La Beng Ba" in the show Singer 2020, imitating multiple voices, including that of a little girl and a man. By April 2020, this performance clip's view count on Bilibili had exceeded 10 million, surpassing that of the original song; after the song was released on Netease Cloud Music, it dominated the chart for several days, and the single has been played over 100 million times, and has been on top of Chinese search engines.

The Longest Day in Chang'an is a 2019 Chinese historical suspense drama directed by Cao Dun and written by Paw Studio. The series stars Lei Jiayin and Jackson Yee. It is based on the novel of the same name by Ma Boyong. The Longest Day in Chang'an is produced jointly by Youku, Beijing Weying Technology Co., Ltd, Liu Bai Entertainment and Yuyue Film Co., Ltd. The series follows the characters Zhang Xiaojing and Li Bi, and their efforts to foil a terrorist attack on Chang'an, the capital of the Tang dynasty (618–907). It began airing in China on Youku from June 27, 2019. 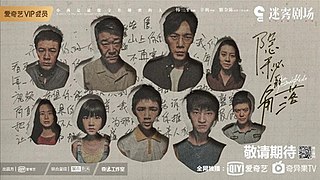 The Bad Kids is a 2020 Chinese streaming television series that premiered on iQiyi on June 16, 2020, which tells a story of the web of consequences birthed among different families after three children accidentally film a murder. It is directed by Xin Shuang, and features an ensemble cast that includes Qin Hao, Wang Jingchun, Zhang Songwen, Liu Lin and Lu Fangsheng, with special starring by Rong Zishan, Shi Pengyuan and Wang Shengdi.

Charlie's Debut Album is the first album of Chinese male singer Zhou Shen which released on November 6, 2017. The album's songs, composer, lyricist and singer won four awards in total after the album released. "Big Fish", the best-known original song from Zhou Shen and "The Rose and the Deer", were also included in this album.