The Tribune is an Indian English-language daily newspaper published from Amritsar, Jalandhar, Ludhiana, Bathinda, Chandigarh and New Delhi. It was founded on 2 February 1881, in Lahore, Punjab (now in Pakistan), by Sardar Dyal Singh Majithia, a philanthropist, and is run by a trust comprising five persons as trustees. [3] It is a major Indian newspaper with a worldwide circulation. [4] [5] [6] [7] In India, it is among the leading English daily for Punjab, Haryana, Himachal Pradesh, and the Union Territory of Chandigarh. [8] The present editor of The Tribune is Rajesh Ramachandran. He was appointed on 14 May 2018. Previously he was editor-in-chief of Outlook magazine. Ramachandran succeeded Harish Khare, who was appointed editor-in-chief of the Tribune Group of newspapers on 1 June 2015, [9] serving until 15 March 2018. [10]

All three newspapers are published by the Tribune Trust. Narinder Nath Vohra is the current president of the Tribune Trust, which comprises S. S. Sodhi, S. S. Mehta, and Gurbachan Jagat as trustees.

The Tribune has had Kali Nath Roy, Prem Bhatia, Hari Jai Singh, H.K. Dua, and Raj Chengappa among others, as its editors-in-chief in the past.

Similar to most Indian newspapers, The Tribune receives most of its revenue from advertisements over subscriptions. [12] 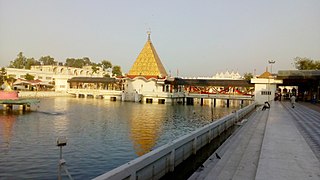 Jalandhar is third most-populous City in the Indian state of Punjab and Largest city in Doaba Region. Jalandhar lies alongside the Grand Trunk Road and is a well-connected rail and road junction. Jalandhar is 146 km northwest of Chandigarh, the state capital of Punjab and Haryana and 82.5 km (51.2 mi) South-East of Amritsar.

Harish Khare is an Indian journalist. He served as the Media Advisor to the Prime Minister's Office from June 2009 to January 2012. On 19 January 2012 he resigned from his post. Khare has worked as Resident Editor and chief of bureau with The Hindu in New Delhi, India. On 14 November 2012, he was awarded the Jawarharlal Nehru Fellowship for his project "Governing India in the 21st Century: Reinventing Nehruvian Executive Leadership Mode." He was the Editor-in-Chief of the Tribune Group of publications from 1 June 2015 until 15 March 2018.

Sobha Singh was a painter from Punjab, India.

Politics in reorganised present-day Punjab is dominated by mainly two parties – Indian National Congress and Shiromani Akali Dal (Badal). Since 1967, Chief Minister of Punjab has been predominantly from Jatt Sikh community despite its 21 percent state population. Only exception was Giani Zail Singh, the Chief Minister of Punjab from 17 March 1972 to 30 April 1977 belonging to Ramgarhia community part of significant OBC community having population of 31.3 percent in the state. However Scheduled Castes (Dalit) community never had Chief Minister from community nor proper representation in Government, despite having 32 percent population in the state. Other prominent party is Bahujan Samaj Party especially in Doaba region founded by Kanshi Ram of Rupnagar district. In 1992 BSP won 9 seats Vidhan Sabha elections. Also BSP won 3 lok sabha seats from Punjab in 1996 general elections and only Garhshanker seat in 1997 Vidhan Sabha elections. Communist parties too have some influence in the Malwa area. In the 2014 general elections, the first-time contesting Aam Aadmi Party got 4 out of 13 seats in Punjab by winning 34 of the total 117 assembly segments, coming second in 7, third in 73 and fourth in the rest 3 segments. The support for the Aam Aadmi Party increased in Punjab from 2014 to 2017 but declined in 2019. The current Government was elected in the 2017 Punjab Assembly elections and the Congress won 77 out of 117 Assembly seats with Captain Amarinder Singh as the Chief Minister. Captain Amarinder Singh resigned on 18 September 2021 and Charanjit Singh Channi became the first Dalit chief minister in Punjab for four months till next elections.

Gulzar Singh Sandhu is a prominent Punjabi language writer. He won the prestigious Sahitya Akademi Award, given by the Sahitya Akademi, India's National Academy of Letters, for his short story collection, Amar Katha in 1982. Among other awards he was also the recipient of International Association of Authors, Playwrights and Artists of Canada in 1992 and Shiromoni Punjabi Sahityakar Puruskar from the Education Department of Punjab in 2001.

Ajit Singh Saini (1922–2007) was an eminent and critically acclaimed writer of Punjab (India). He was associated with the Punjabi daily "Ajit" as its managing editor and columnist. He is remembered in Punjab both as a freedom-fighter and an acclaimed writer and columnist. He was an officer in Indian National Army (INA) and a close lieutenant of Subhas Chandra Bose. Saini worked with the wire service of INA and Arzi Hukumat-e-Azad Hind or Provisional Government of Free India, more simply, Indian government in exile.

The Panjab Digital Library is a voluntary organization digitizing and preserving the cultural heritage of Panjab since 2003. With over 30 million digitized pages, it is the biggest resource of digital material on Panjab. There are many historically significant documents stored and made available online. Its scope covers Sikh and Punjabi culture. The library funded by The Nanakshahi Trust was launched online in August 2009. Its base office is located at Chandigarh, India. 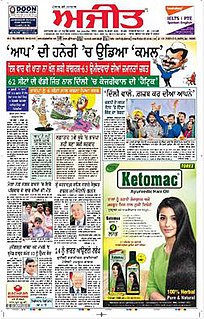 Ajit(Daily Ajit) is a Punjabi language daily newspaper published in Jalandhar, India. The newspaper is run by Sadhu Singh Humdrad Trust. The newspaper was founded in 1941 in Urdu language. Veteran journalist and ex-Rajya Sabha member, Barjinder Singh Hamdard, is the current editor-in-chief. In 2007–08, it claimed a circulation of more than 333 thousand.

Roopinder Singh is an Indian journalist and author. He retired as Senior Associate Editor with the English daily newspaper, The Tribune, published from Chandigarh, India. His specialization is Sikh history and culture, information technology, and education. He is the author of five major books in English, including a critically acclaimed volume on the founder of Sikh religion, Guru Nanak Dev, and a volume on Sikh heritage. He lives in Chandigarh, Punjab.

The Shiromani Akali Dal (SAD) is a centre-right Sikh-centric state political party in Punjab, India. The party is the second-oldest in India, after Congress, being founded in 1920. Although, there are many parties with the name Akali Dal but the party recognised as "Shiromani Akali Dal" by the Election Commission of India is the one led by Sukhbir Singh Badal. It controls Sikh religious bodies Shiromani Gurudwara Prabandhak Committee, Delhi Sikh Gurdwara Management Committee and is the largest and most influential Sikh political party worldwide. The basic philosophy of Akali Dal was to give a political voice to Sikh issues and it believed that religion and politics go hand in hand but after 1996 the Moga Conference party adopted a moderate Punjabi secular agenda. On 26 September 2020, they left the NDA over the farms bill.

Kunwar Singh Negi was an Indian braille editor and social worker. He has transliterated 300 books into braille. His major works include Bhagwan Buddh Ka Updesh and Hazrat Mohammed Ki Vani, both being about teachings of Gautam Buddha and Muhammad. He was presented with Indian civilian awards Padma Shri in 1981 and later with Padma Bhushan in 1990.

Omkar Chaudhary is an Indian journalist and writer who is currently editor in National Newspaper Hari Bhoomi Haryana. He has worked in many different Indian Hindi newspapers in his career. Thousands of articles have been published so far. Ten books have been printed on different subjects. One of his books has muffled a researcher from Kurukshetra University on the inscription on time. As an analyst and reviewer, many TV channels and Akashwani have been associated. He has been honored with many awards in his thirty-four journalistic career. Omkar Chaudhary started his journalism career from the Sandhya Dainik Prabhat newspaper published in Meerut in 1983.

Sucha Singh Gill is an Indian economist of Punjabi origins. His areas of expertise include Development Economics, International Economics and Economy of Punjab.

Gurjot Singh Kaler is an Indian police officer, author, writer and singer, who authored a best selling book, New India - The Reality Reloaded in 2018. He is serving as the Superintendent of Police (SP) in Punjab Police and currently, he is in the United Kingdom, working with the Avon and Somerset Police force in the domain of Digital policing.