Happy Valley is an upper-income residential area in Hong Kong, located on Hong Kong Island. The area is bordered by Caroline Hill to the east, Jardine's Lookout to the south, Morrison Hill to the west, and Causeway Bay to the north. Administratively, it is part of Wan Chai District.

Taikoo Shing or Tai Koo Shing, is a private residential development in Quarry Bay, in the eastern part of Hong Kong Island, Hong Kong. It is a part of Swire's property business, along with Taikoo Place, the adjacent Cityplaza retail and office complex and EAST, a lifestyle business hotel. 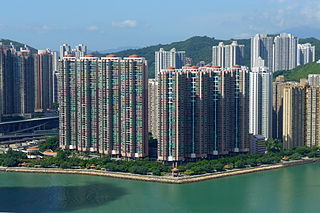 Villa Esplanada is a private housing estate developed by Sun Hung Kai Properties, China Resources and Cheung Kong on Tsing Yi Island in Hong Kong. It locates on the relocated oil depots on the former island Nga Ying Chau. It is close to Ching Wang Court, Tsing Yi station of MTR and Airport Express. The flats were sold in three phases.

Victoria Road is a main road near the west shore of Hong Kong Island in Hong Kong connecting Kennedy Town and Wah Fu and an alternative connection of Pok Fu Lam Road. It begins north with Belcher's Street in Kennedy Town and goes along Mount Davis, Sandy Bay, Telegraph Bay and Waterfall Bay and reaches in Kellett Bay. 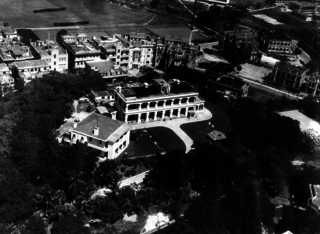 Observatory Hill, formerly known as Elgin Hill (伊利近山), is a hill where the Hong Kong Observatory is sited. Observatory Road is a road passing through Royal Observatory Hong Kong from east to west. Both its south slope Knutsford Terrace and north slope Hillwood Road are full of foreign restaurants, pubs and bars.

Gage Street is a street in Central, Hong Kong. It is on the lower hill and between the junction with Cochrane Street and Lyndhurst Terrace, Graham Street and Aberdeen Street. The street is mainly a market.

Cochrane Street is a hilly street between Queen's Road Central and the junction with Gage Street and Lyndhurst Terrace in Central, Hong Kong. The whole street hosts the Central–Mid-Levels escalators.

Shing Wong Street is a street on the hill slope of Sheung Wan and Mid-Levels, Hong Kong. The street extends from Gough Street at its lowest to Caine Road highest. The street is one of ladder streets in Hong Kong, made of stone steps, in the section between Hollywood Road and Caine Road.

Knutsford Terrace is a terrace street in Tsim Sha Tsui, Kowloon in Hong Kong. It is famous for its bars, pubs and restaurants.

Ship Street is a street in Wan Chai, Hong Kong. It starts from Johnston Road, crosses Queen's Road East and goes uphill southward and reaches Kennedy Road. Part of the street is ladders and much of the century-old buildings are abandoned. Locals often refer to these buildings as the "Ghost House".

Tai Hang Road is a major road on the north side of Hong Kong Island in Hong Kong. Starting low from Tai Hang at Tung Lo Wan Road, Causeway Bay, it winds up to So Kon Po and further up to the mid-levels of Jardine's Lookout and Mount Nicholson, passing through Wong Nai Chung Gap. This is a road along which there are a number of luxurious residential apartments, such as Illumination Terrace, Grand Deco Tower and YI, where many affluent upper-middle/ upper-class families call home.

The Peak Tower is a leisure and shopping complex located at Victoria Gap, near the summit of Victoria Peak on Hong Kong Island, Hong Kong. It also houses the upper terminal of the Peak Tram. Both the Peak Tower and the Peak Tram are owned by the Hongkong and Shanghai Hotels group, the owner of Hong Kong's Peninsula Hotel and other properties. The tower and tram are jointly promoted by the collective branding known as The Peak. 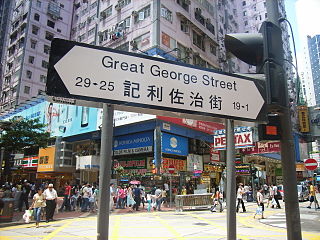 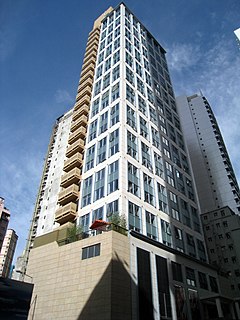 Hopewell Centre or QRE Plaza is a 25-storey building located at No. 202 Queen's Road East, Wan Chai, Hong Kong, developed by Hopewell Holdings. The plaza was completed in 2007 and contains a shopping centre, restaurants and health clinics. QRE Plaza measures nearly 89 metres (292 ft) in height, and has a Gross floor area (GFA) of about 77,000 square feet (7,200 m2).

Wetland Park is an MTR Light Rail stop. It is located at ground level beside Wetland Park Road, between Hong Kong Wetland Park and Grandeur Terrace, in Tin Shui Wai, Yuen Long District. It began service on 7 December 2003 and belongs to Zone 5A. 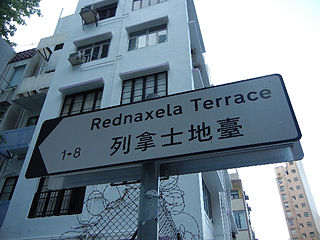 Rednaxela Terrace is a pedestrian-only street in Mid-Levels, Hong Kong.