The Young Tigers of Hong Kong 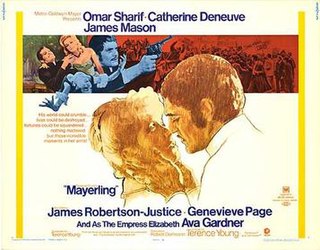 Mayerling is a 1968 romantic tragedy film starring Omar Sharif, Catherine Deneuve, James Mason, Ava Gardner, Geneviève Page, James Robertson Justice and Andréa Parisy. It was written and directed by Terence Young. The film was made by Les Films Corona and Winchester and distributed by Metro-Goldwyn-Mayer.

I Knew Her Well is a 1965 Italian comedy-drama film directed by Antonio Pietrangeli and starring Stefania Sandrelli.

Kiss Me General is a 1966 French comedy film directed by Michel Deville and starring Robert Hirsch, Véronique Vendell, Walter Rilla, Marlène Jobert and Anthony Sharp. An actor disguises himself as a soldier during the Second World War, but is mistaken for a soldier and becomes a war hero during the Allied Liberation of France in 1944.

Véronique Vendell is a French actress. She appeared mainly in French and German productions, but had roles in both Peter Glenville's Becket and Sam Peckinpah's Cross of Iron and its sequel Breakthrough.

Born to Fight is a 1989 action film, starring Brent Huff, John van Dreelen, Werner Pochath and Mary Stavin. The film was shot on Philippines due to low budget in 1988 and is the third time − after Strike Commando 2 (1988) and Cop Game (1988) − when Brent Huff worked with director Bruno Mattei. 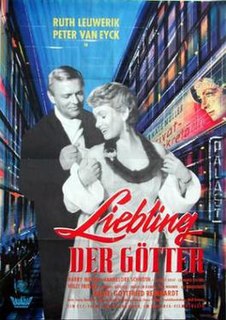 Sweetheart of the Gods is a 1960 West German biographical film directed by Gottfried Reinhardt and starring Ruth Leuwerik, Peter van Eyck, and Harry Meyen. The film portrays the life of Renate Müller, a German film actress who died in 1937 in mysterious circumstances. A variety of rumours about Müller's death had developed, but the filmmakers chose to portray it as suicide following Nazi pressure over her relationship with a Jewish diplomat. Following legal objections from Müller's family, the ending was toned down to make her final fate more vague.

Rosemary's Daughter is a 1976 West German sex comedy film directed by Rolf Thiele and starring Lillian Müller, Béla Ernyey, and Werner Pochath. It is based on the story of Rosemarie Nitribitt, which Thiele had already treated more seriously in the 1958 drama Rosemary.

Angels of the Street or The Angel of St. Pauli is a 1969 West German crime film directed by Jürgen Roland and starring Horst Frank, Herbert Fux and Werner Pochath. It is set in the St. Pauli red light district of the port of Hamburg.

The Woman Without a Soul is a 1920 German silent film directed by Léo Lasko and starring Edith Meller, Werner Krauss and Alfred Abel.

Klaus von Rautenfeld (1909–1982) was a cinematographer. Of Baltic German origin, he was born in Estonia which was then part of the Russian Empire. During the 1930s he worked as an assistant cameraman for Luis Trenker. Following the Second World War he was very active in West German commercial cinema working on a mixture of thrillers and comedies.

Holiday Report is a 1971 West German comedy film directed by Ernst Hofbauer and starring Sybil Danning, Astrid Frank and Werner Abrolat. It was produced by Wolf C. Hartwig's Rapid Film, in an attempt to capitalise on the success of the company's hit Schoolgirl Report series.

Rapid Film was a German film production company established by producer Wolf C. Hartwig. Based in Munich, it operated from the late 1950s to the mid-1980s producing low-budget but commercially successful genre films. During the 1960s Rapid established a distribution arrangement with the leading German studio Constantin Film, and provided the company with many of its hit releases. During the 1970s Hartwig concentrated on producing sex comedies such as the Schoolgirl Report series.