Theaterlexikon der Schweiz (TLS) / Dictionnaire du théâtre en Suisse (DTS) / Dizionario Teatrale Svizzero (DTS) / Lexicon da teater svizzer (LTS) is an encyclopedia about theatre in Switzerland published originally in 2005 in 3 volumes. It was developed from 1997 to 2005 by the Institute of Theatre Studies of the University of Berne.

Its 3600 entries include 3000 biographies and articles about venues, groups, organizations, events and general topics.

Articles are available in the four official languages of Switzerland : German (70%), French (20%), Italian (6%) or Romansh (2%). The* Romansh language articles have also been translated in German.

Romansh is a Romance language spoken predominantly in the southeastern Swiss canton of Grisons (Graubünden), where it has official status alongside German and Italian. It is used as the medium of instruction in schools in Romansh-speaking areas. Romansh has also been recognized as a national language of Switzerland since 1938, and as an official language in correspondence with Romansh-speaking citizens since 1996, along with German, French and Italian. It is sometimes grouped by linguists with Ladin and Friulian as a Rhaeto-Romance language, though this is disputed.

The text (without illustrations) was published online in 2012 in the form of a wiki website.

Achim Benning is a German actor and director.

Niklaus Aeschbacher was a Swiss composer and conductor.

Václav Kašlík was a Czech composer, opera director and conductor, known for his operas, both on the stage and on television.

Jean-François Balmer is a Swiss actor. He has worked extensively in French cinema, television and stage productions since the early 1970s.

Flavio Maspoli was a Swiss politician and a co-founder of the Lega dei Ticinesi. He was a member of the Swiss National Council (1991–2003).

Bern Theatre, known in the city as Stadttheater Bern, is an opera house and theatre in Bern, Switzerland. It opened in 1903 with Richard Wagner`s opera Tannhäuser.

Rachel Yakar is a French soprano.

Roger Jendly is a Swiss actor. He has appeared in 65 films and television shows since 1972. He starred in the film C'est pas tout à fait la vie dont j'avais rêvé, which was screened out of competition at the 2005 Cannes Film Festival.

Jack Rollan (1923–2007) was a Swiss journalist. He published, among others, books of Léon Savary.

Foofwa d’Imobilité is a Swiss dancer and choreographer. He lives and works in Geneva, Switzerland, and Brooklyn, New York.

Pascal Bongard is a Swiss film actor. He has appeared in more than forty films since 1984.

Sylvia Gähwiller was a Swiss operatic soprano and a voice teacher. She was most successful as a concert and recital singer, who included contemporary composers. 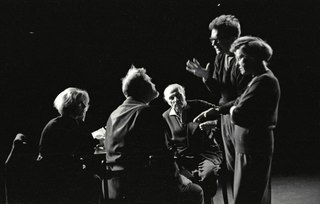