Theodore Miller Edison (July 10, 1898 – November 24, 1992) was an American businessman, inventor, and environmentalist. He was the fourth son and youngest child of inventor Thomas Edison, and founder of Calibron Industries, Inc.. He was the third child of Edison with his second wife, Mina Miller Edison.

He was born on July 10, 1898, at Glenmont, the Edison home in Llewellyn Park in West Orange, New Jersey. He attended The Haverford School in Haverford, Pennsylvania, and later the Montclair Academy in Montclair, New Jersey, from which he graduated in 1916. [1] [2] Theodore ended his education at Massachusetts Institute of Technology. He earned a physics degree in 1923 and remained there another year to pursue graduate studies. [3]

After graduation, Theodore worked for his father's company, Thomas A. Edison, Inc., starting as a lab assistant. He later founded his own company, Calibron Industries, Inc., and built his own smaller laboratory in West Orange. He earned over 80 patents in his career.

In later years he became an ardent environmentalist and helped preserve Corkscrew Swamp Sanctuary in southwest Florida. [5] He was also an opponent of the Vietnam War and advocate of Zero Population Growth. He lived in West Orange, New Jersey and died from Parkinson's disease on November 24, 1992. [6] 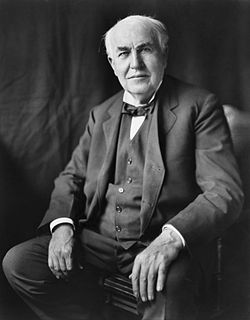 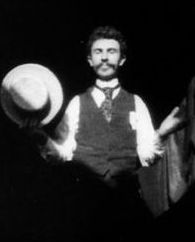 William Kennedy-Laurie Dickson was a Scottish-American inventor who devised an early motion picture camera under the employment of Thomas Edison.

Frederick P. Ott was an employee of Thomas Edison's laboratory in the 1890s. His likeness appears in two of the earliest surviving motion pictures – Edison Kinetoscopic Record of a Sneeze and Fred Ott Holding a Bird – both from 1894.

Daniel McFarlan Moore was a U.S. electrical engineer and inventor. He developed a novel light source, the "Moore lamp", and a business that produced them in the early 1900s. The Moore lamp was the first commercially viable light-source based on gas discharges instead of incandescence; it was the predecessor to contemporary neon lighting and fluorescent lighting. In his later career Moore developed a miniature neon lamp that was extensively used in electronic displays, as well as vacuum tubes that were used in early television systems.

Charles W. Batchelor was an inventor and close associate of American inventor Thomas Alva Edison during much of Edison's career. He was involved in some of the greatest inventions and technological developments in history. 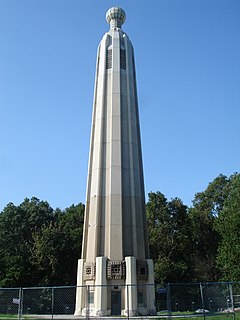 The Thomas Edison Center at Menlo Park, also known as the Menlo Park Museum / Edison Memorial Tower, is a memorial to inventor and businessman Thomas Alva Edison, located in the Menlo Park area of Edison, Middlesex County, New Jersey. The tower was dedicated on February 11, 1938, on what would have been the inventor's 91st birthday.

The Edison Museum, a science and history museum about the life and inventions of Thomas Edison, is located in Beaumont, Texas at 350 Pine St. on the grounds of Edison Plaza.

Wilber Brotherton Huston was an American scientist and NASA mission director. He was the Deputy Project Manager of the Nimbus program and served as mission director for seven satellite launches. At the age of sixteen he had won the first Edison Scholarship Contest.

Thomas A. Edison, Incorporated was the main holding company for the various manufacturing companies established by the inventor and entrepreneur Thomas Edison. It was a successor to Edison Manufacturing Company and operated between 1911 and 1957, when it merged with McGraw Electric to form McGraw-Edison. 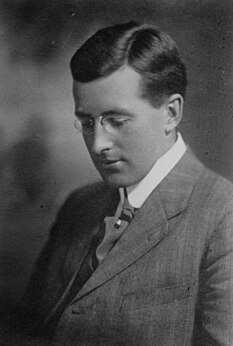 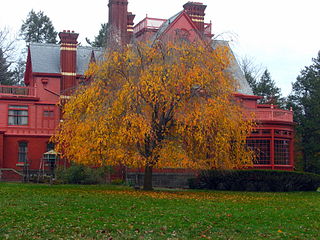 West Orange is a suburban township in Essex County, New Jersey, United States. As of the 2010 United States Census, its population was 46,207, an increase of 1,264 (+2.8%) from the 44,943 counted in the 2000 Census. West Orange is both an inner-ring suburb of Newark and a commuter suburb of New York City; it is approximately 12 miles west of Manhattan. West Orange is well known for having been home to the inventor Thomas Edison, who also maintained a laboratory and workshop in town.

George Francis Morrison (1867–1943), was an American business executive, industrialist, Edison Pioneer, and a Director and Vice President of General Electric Company. He was one of Thomas Edison's closest associates and a pioneer in the production of the incandescent lamp. Towards the latter part of his decades-long career, Morrison traveled the world introducing the lamp and promoting its use.

Light's Golden Jubilee was a celebration of the 50th anniversary of Thomas Edison's incandescent light bulb, held on October 21, 1929, just days before the stock market crash of 1929 that swept the United States headlong into the Great Depression. The Jubilee also served as the dedication of Henry Ford's Greenfield Village, originally known as the Thomas Edison Institute.

The Research & Development Council of New Jersey is a nonprofit organization which advocates for progress in various research and development sectors in the state of New Jersey. Its membership includes representatives from academia, industry, and government. Members of the Council are offered services such as policy analysis and recent news in the fields of science research. The Research & Development Council of New Jersey was the principal fundraiser for the construction of the Liberty Science Center, and it also funds a dozen scholarships for New Jersey students yearly. The organization was established in 1962 and is based in Newark.

The Edison State Park is located in the Menlo Park section of Edison, New Jersey. It is located on Christie Street, the first street in the world to be lit up by lightbulb, just off Lincoln Highway, near the Metropark Train Station. It covers a total area of 37 acres (0.15 km2). The park commemorates the site where the famous inventor Thomas Alva Edison had his Menlo Park laboratory. In his laboratory, Edison invented over 600 inventions such as the incandescent electric light and the phonograph, the latter being the first object to record and play sound.

C. Thomas Schettino was a Justice of the New Jersey Supreme Court from 1959 to 1972.

Edison laboratory or laboratories refers to one of American inventor and businessman Thomas Edison's labs: