The daughter of Alexander Britton and Ada Willoughby, both natives of England, she was born Theodosia Ada Britton in Jolimont, East Melbourne. The family moved to Sydney around 1885. She was educated at home by private tutor and then studied at the University of Sydney. [1]

She taught school briefly and then began writing a social column as "Biddy B.A." for The Argus and Australasian Post in Melbourne. She also wrote for The Sydney Morning Herald , later becoming a member of its staff. The Herald added a weekly "Page for Women" in 1905 and she became editor for the page. That same year, she married Albert Edward Noble Wallace. She left the Herald prior to the birth of her first child in 1907. [1]

In 1909, she published The Etiquette of Australia. She later returned to journalism, writing for various newspapers. Wallace wrote a weekly column "An Idle Woman's Diary" under the name "INO" for The Newcastle Herald , Wallace was the first head of the press clipping service for the Country Press Association. She helped found the Society of Women Writers and served as its vice-president. [1]

The Bulletin was an Australian magazine first published in Sydney on 31 January 1880. The publication's focus was politics and business, with some literary content, and editions were often accompanied by cartoons and other illustrations. The views promoted by the magazine varied across different editors and owners, with the publication consequently considered either on the left or right of the political spectrum at various stages in its history. The Bulletin was highly influential in Australian culture and politics until after the First World War, and was then noted for its nationalist, pro-labour, and pro-republican writing. It was revived as a modern news magazine in the 1960s as The Bulletin with Newsweek, and was Australia's longest running magazine publication until the final issue was published in January 2008.

Ada Cambridge, later known as Ada Cross, was an English-born Australian writer. She wrote more than 25 works of fiction, three volumes of poetry and two autobiographical works. Many of her novels were serialised in Australian newspapers but never published in book form. While she was known to friends and family by her married name, Ada Cross, her newspaper readers knew her as A.C. She later reverted to her maiden name, Ada Cambridge, and that is how she is known today.

Gwendoline Jean Plumb AM BEM, was an Australian performer of international appeal, actress and comedian active in literally every form of the art genre, including revue, pantomime, vaudeville, interviewing, stage, radio, game shows, live appearances, television soap opera and mini-series and made for TV film. She was considered the Grand Dame of Australian entertainment, best known to local and international audiences as "Ada Simmonds" in serial The Young Doctors aa well as the pilot episode of Home and Away and the ill-fated Richmond Hill. She was known for her outrageous, but hilarious "Chook Call".

Kaz Cooke is an Australian author, cartoonist and broadcaster. She has written several bestselling advice books for girls and women, including Real Gorgeous, Up the Duff, Kidwrangling. Girl Stuff and Women's Stuff, as well as a series of ebooks on women's health topics. Cooke has been a columnist for various Australian newspapers and magazines, including Dolly, The Age, The Australian, Who and The Canberra Times. A collection of her columns, Living with Crazy Buttocks, won the 2002 Bookseller/Diagram Prize for Oddest Title of the Year. In 2008, Girl Stuff won the Australian Publishers Association's General Non-fiction Book of the Year, the Australian Booksellers Association Nielsen BookData Booksellers' Choice Award, and an honour prize from the Children’s Book Council of Australia.

The Herald was a morning, and later, evening, broadsheet newspaper published in Melbourne, Australia from 3 January 1840 to 5 October 1990. 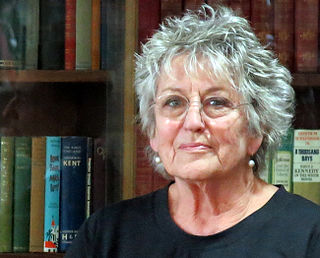 Germaine Greer is an Australian writer and public intellectual, regarded as one of the major voices of the radical feminist movement in the latter half of the 20th century.

Florence Violet McKenzie OBE, affectionately known as "Mrs Mac", was Australia's first female electrical engineer, founder of the Women's Emergency Signalling Corps (WESC) and lifelong promoter for technical education for women. She campaigned successfully to have some of her female trainees accepted into the all-male Navy, thereby originating the Women's Royal Australian Naval Service (WRANS). Some 12,000 servicemen passed through her signal instruction school in Sydney, acquiring skill in Morse code and visual signalling.

Ada Mary à Beckett MSc, née Lambert, was an Australian biologist, academic and leader of the kindergarten movement in Australia. She was the first woman appointed lecturer at Melbourne University.

Alexina Maude Wildman, also known as Ina Wildman, was an Australian journalist and columnist, known for writing weekly columns for The Bulletin magazine under her pen name "Sappho Smith". The first of her weekly columns appeared in the magazine on 28 April 1888. The column was written as a letter to "my dear Moorabinda," headed with a cartoon image of an old woman. The column contained a variety of information about current events, often portrayed in a sarcastic, critical way. It was the first gossip column in Sydney. Wildman's last column appeared on 22 August 1896, a few months before her death from nephritis in Waverley, New South Wales.

Ann Flora Froude Flashman , was an Australian veterinarian. She was the first woman to enrol in the University of Sydney School of Veterinary Science and the first paid veterinarian at the Lort Smith Animal Hospital in North Melbourne which had previously been an honorary role held by Belle Bruce Reid.

Helen Haenke (1916–1978) was an Australian artist, poet and playwright whose work was part of an emerging literary community in south-east Queensland in the late 1960s and 1970s.

Zara Baar Aronson was a Sydney-based journalist, editor, welfare worker, feminist and restaurateur of Jewish background. She was born in Australia but spent her formative years in Europe, before returning to Sydney where she became a socialite as well as a social columnist and journalist in a number of major newspapers across Australian cities. She pursued social and charity work as well as her own business in publishing, food and catering. Aronson helped form the Society for Women Writers and a local branch of John O'London's Literary Circle, and was a founding member and secretary of the National Council of Women of Australia. During World War II she raised funds for the Junior Red Cross by selling a cookery book, after which she published another well-relieved cookbook, Twentieth Century Cookery Practice. In later life she was made a civil officer of the Order of the British Empire for her services to the community.

Sylvia Rose Ashby was a British-born Australian market researcher and founder of the Ashby Research Service. A pioneer in the field, she was the first female market researcher in Australia and the United Kingdom, and the first person to conduct an Australia-wide public opinion poll. Mentored by two of the finest market researchers of the day, she used her experience to great effect and steadily grew her business.