The Third Abe Cabinet governed Japan under the leadership of Prime Minister Shinzō Abe from December 2014 to November 2017. The government is a coalition between the Liberal Democratic Party and the Komeito (which had changed its name from "New Komeito" in the 2012–2014 term) and controls both the upper and lower houses of the National Diet.

Following the 2017 general election, the Third Abe cabinet was dissolved on November 1, 2017, and replaced with the Fourth Abe cabinet.

Following the snap "Abenomics Dissolution" and general election of 2014, Abe was re-elected by the Diet and chose to retain all the ministers from his previous cabinet bar Defense Minister Akinori Eto, who had been involved in a money scandal. Abe explained that he aimed to avoid the disruption of another major personnel change only three months after the September cabinet reshuffle. [1] [2]

Abe has conducted three reshuffles of his third administration, the first took place in October 2015 following his re-election to another three-year term as President of the LDP and the launch of his "Abenomics 2.0" policies. [3] [4] The second reshuffle occurred in August 2016, following the victory of the ruling coalition in the July 2016 upper house elections, the first time since 1989 that the LDP has held an outright majority in the House of Councillors. [5] [6] The third reshuffle occurred in August 2017.

Election of the Prime Minister 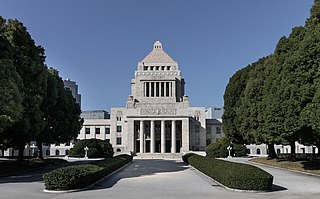 The politics of Japan are conducted in a framework of a multi-party bicameral parliamentary representative democratic constitutional monarchy in which the Emperor is the Head of State and the Prime Minister is the Head of Government and the Head of the Cabinet, which directs the executive branch.

Shinzo Abe is a Japanese politician who served as Prime Minister of Japan and President of the Liberal Democratic Party (LDP) from 2006 to 2007 and again from 2012 to 2020. He is the longest-serving prime minister in Japanese history. Abe also served as Chief Cabinet Secretary from 2005 to 2006 under Junichiro Koizumi and was briefly Leader of the Opposition in 2012.

House of Councillors elections were held in Japan on July 29, 2007. The date was originally to be July 22, but the ruling Liberal Democratic Party (LDP) decided in mid-June to extend the session of the House for a week to finish up legislative business; this step was criticised due to the short-term delay. 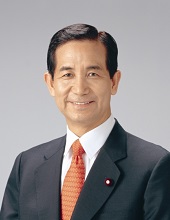 Kozo Yamamoto is a former Ministry of Finance official, Japanese politician of the Liberal Democratic Party (LDP), a member of the House of Representatives in the Diet, and is currently State Minister in charge of: Regional Revitalization; Regulatory Reform; Administrative Reform; City, People, Job-Creation; and Civil Service Reform. Previous posts include Vice Minister of Economy, Trade, and Industry, Chairman of the Judicial Affairs Committee of the House of Representatives, Chairman of the Special Commission on Consumer Issues, and Chairman of the Special Commission on Regional Revitalization. 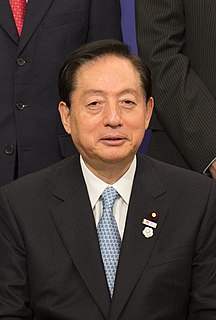 General elections were held in Japan on 16 December 2012. Voters gave the Liberal Democratic Party a landslide victory, ejecting the Democratic Party from power after three years. It was the fourth worst defeat suffered by a ruling party in Japanese history.

Shinjirō Koizumi is a Japanese politician who served as the Minister of the Environment from September 2019 to October 2021. He also serves as a member the Member of the House of Representatives for the Liberal Democratic Party. He is the second son of former Prime Minister Junichirō Koizumi and the younger brother of actor Kotaro Koizumi.

General elections were held in Japan on 14 December 2014. Voting took place in all Representatives constituencies of Japan including proportional blocks, in order to appoint Members of Diet to seats in the House of Representatives, the lower house of the National Diet of Japan. As the cabinet resigns in the first post-election Diet session after a general House of Representatives election, the lower house election also led to a new designation election of the prime minister in the Diet, and the appointment of a new cabinet. The turnout in this election is the lowest in Japanese history.

Aomori 2nd district is a single-member constituency of the House of Representatives in the national Diet of Japan. It is located in Northeastern Aomori and covers the prefecture's Towada, Misawa, and Mutsu cities, Shimokita District, a portion of Kamikita District, and the town of Gonohe within Sannohe District.

The Hosokawa Cabinet governed Japan from August 9, 1993, to April 28, 1994, under the leadership of Prime Minister Morihiro Hosokawa.

The First Hashimoto Cabinet was formed in January 1996 under the leadership of Ryutaro Hashimoto, following the resignation of Tomiichi Murayama as Prime Minister of Japan and head of the coalition between the Liberal Democratic Party, Japan Socialist Party and New Party Sakigake. The smaller Socialist party relinquished the leadership of the government to the LDP, which was the largest party in the Diet and Hashimoto assumed the premiership, becoming the first LDP Prime Minister since August 1993.

The Second Abe Cabinet governed Japan under the leadership of Prime Minister Shinzō Abe from December 2012 to December 2014. Following the return to power of the LDP in the 2012 general election, Abe, as party president, was elected Prime Minister by the National Diet on December 26, 2012, and presented his cabinet for swearing in by the Emperor later that day. Abe formed a coalition with the New Komeito Party, which has partnered with the LDP since the late 1990s, appointing former leader Akihiro Ota as Minister of Land. Together the two parties controlled a two-thirds majority in the House of Representatives, allowing the new government in most matters to override the veto of the upper house which was controlled by the opposition parties until July 2013.

The Obuchi Cabinet governed Japan from July 1998 to April 2000 under the leadership of Prime Minister Keizō Obuchi, who took office after winning the Liberal Democratic Party leadership. Initially a continued LDP single-party government without legislative majority in parliament on its own after the 1998 election, it expanded to become a coalition involving first the Liberal Party and then the New Komeito over the course of its term. The government focused on economic revival, with former Prime Minister Kiichi Miyazawa recalled to the position of Finance Minister, and introduced policies designed to stimulate the economy through tax cuts and public spending increases. 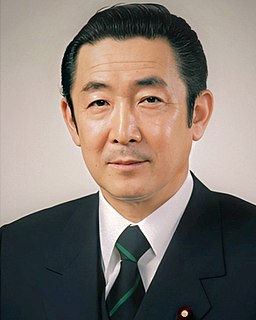 The Second Hashimoto Cabinet governed Japan from November 1996 to July 1998 under the leadership of Ryutaro Hashimoto. 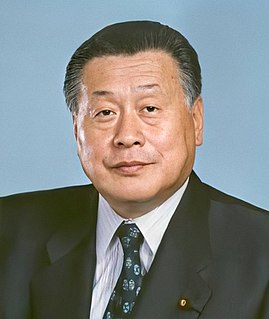 The Second Mori Cabinet governed Japan between July 2000 and April 2001 as a coalition government under the leadership of Prime Minister Yoshirō Mori of the Liberal Democratic Party. The cabinet was formed after the LDP-NKP-NCP coalition was returned to office with a substantially reduced majority in the June 25 general election, and inaugurated after Mori's re-election by the National Diet on July 4. Unlike his first cabinet, which retained all of former Prime Minister Keizō Obuchi's ministers, Mori introduced several personnel changes, although this was done with reference to LDP factions.

The First Mori Cabinet briefly governed Japan between April and July 2000, after the sudden incapacitation of Prime Minister Keizō Obuchi and his replacement by Yoshirō Mori, who had been LDP Secretary General. Mori called his government "the Japan revival cabinet", but made no personnel changes when he took office, pledging to retain Obuchi's ministers, maintain the 3-party coalition and continue his policies to try to revive the economy.

The First Koizumi Cabinet governed Japan from April 2001 until November 2003 under the leadership of Prime Minister Junichiro Koizumi, who came to power after winning a surprise victory in the LDP presidential election of 2001. The cabinet continued the LDP-Komeito-NCP coalition and contained a record number of 5 women, including Makiko Tanaka as the first female Foreign Minister. Several ministers from the previous Mori Administration remained in office to ensure the continuity and stability of government. Unusually for an LDP leader, Koizumi chose his cabinet himself and personally asked ministers to join the government, unlike previous practice where party factional leaders often chose government posts.

The Second Koizumi Cabinet was the cabinet of Japanese Prime Minister Junichiro Koizumi during his second term from November 2003 to September 2005. The cabinet was formed after the coalition of the Liberal Democratic Party and the Komeito was re-elected with a slightly reduced majority at the November 2003 general elections. The LDP lost 10 of its pre-election seats to become a minority in the National Diet, but immediately regained a majority by absorbing its coalition partner, the New Conservative Party. Koizumi had reshuffled the cabinet less than two months before the election, and so made no changes when he was re-elected by the Diet on November 19.

The Third Koizumi Cabinet governed Japan for the final year of Junichiro Koizumi's term as Prime Minister, from September 2005 to September 2006, following the landslide victory of his coalition in the "postal election" of 2005.