Martyn was a merchant of Galway and a member of the Martyn family, one of the Tribes of Galway. He was the son of former Mayor of Galway, Wylliam Martin.

In 1558 he obtained a grant from Queen Mary to build a mill on the west side of the Corrib river, on condition that he build a new stone bridge defended with gates and battlements.

It was completed in 1562 and bore a plaque declaring that Thomas Óge and his wife Evelina Lynch "caused this bridge and mill to be made". The bridge and mills was demolished c. 1800 and rebuilt as the Bridge Mills by the Murphy family. The rebuilt bridge is now called O'Brien's Bridge.

He was the father of William Óge Martyn and Francis Martin, both of whom were later Mayors of Galway. 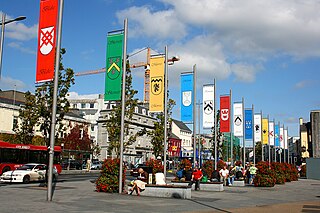 Richard Óge Martyn was a Galway lawyer and member of the Catholic Confederates of Ireland. He was of the senior line of the Martyn family, one of the Tribes of Galway. He lived at Dunguaire Castle, Kinvarra. He worked with his brother-in-law and first cousin, Patrick Darcy, against the Plantation of Connaught in the 1630s, and served on the Supreme Council of the Confederate Catholics in the 1640s. Martyn also served as Mayor of Galway, 1642–1643. He and Darcy were part of a network of Catholic lawyers in Galway who contrived to continue in practice in defiance of the Penal Laws, which barred Catholics from the professions. Richard was admitted to the King's Inns in 1631: he was suspended from practice at the Irish Bar in 1635 as a known Catholic, but permitted to resume practice in 1637, apparently because he had sworn the Oath of Supremacy.

Martyn, or Martin is the surname of one of The Tribes of Galway, Ireland.

William Óge Martyn was the 101st Mayor of Galway.

Wylliam Martin was the 34th Mayor of Galway.

Sir John Kirwan (1650-1721) was an Irish Entrepreneur who founded the Kirwans of Castle Hackett, County Galway.

Teige Ó Flaithbheartaigh was an Irish rebel and warlord.

William Ó Ciardhubháin, fl. 1488, was an Irish merchant and the founder of one of the Tribes of Galway.

William Martyn may refer to: