Thomas à Kempis (c. 1380 – 25 July 1471) [1] was a German-Dutch canon regular of the late medieval period and the author of The Imitation of Christ , one of the most popular and best known Christian devotional books. His name means Thomas "of Kempen", his home town, and in German he is known as Thomas von Kempen (in Dutch, Thomas van Kempen). [2]

He was a member of the Modern Devotion, a spiritual movement during the late medieval period, and a follower of Geert Groote and Florens Radewyns, the founders of the Brethren of the Common Life. [3]

Thomas was born in Kempen in the Rhineland. [4] His surname at birth was Hemerken (or Hammerlein), meaning the family's profession, "little hammer," Latinized into "Malleolus." [5] His father, Johann, was a blacksmith and his mother, Gertrud, was a schoolmistress. [4]

In 1392, Thomas followed his brother, Johann, to Deventer in the Netherlands in order to attend the noted Latin school there. While attending this school, Thomas encountered the Brethren of the Common Life, followers of Gerard Groote's Modern Devotion. He attended school in Deventer from 1392 to 1399. [4]

After leaving school, Thomas went to the nearby city of Zwolle to visit his brother again, after Johann had become the prior of the Monastery of Mount St. Agnes there. This community was one of the canons regular of the Congregation of Windesheim, founded by disciples of Groote in order to provide a way of life more in keeping with the norms of monastic life of the period. Thomas himself entered Mount St. Agnes in 1406. He was not ordained a priest, however, until almost a decade later. He became a prolific copyist and writer. Thomas received Holy Orders in 1413 [6] and was made sub-prior of the monastery in 1429. [7]

His first tenure of office as subprior was interrupted by the exile of the community from Agnetenberg (1429). A dispute had arisen in connection with an appointment to the vacant See of Utrecht. Pope Martin V rejected the nomination of Bishop-elect Rudolf van Diepholt, and imposed an interdict. The Canons remained in exile in observance of the interdict until the question was settled (1432). During this time, Thomas was sent to Arnhem to care for his ailing brother. He remained there until his brother died in November, 1432. [6]

Otherwise, Thomas spent his time between devotional exercises in writing and in copying manuscripts. He copied the Bible no fewer than four times, [6] one of the copies being preserved at Darmstadt, Germany, in five volumes. In its teachings he was widely read and his works abound with biblical quotations, especially from the New Testament.

As subprior he was charged with instructing novices, and in that capacity wrote four booklets between 1420 and 1427, later collected and named after the title of the first chapter of the first booklet: The Imitation of Christ. Thomas More said it was one of the three books everybody ought to own. [8] Thirteen translations of the Imitatio Christi and three paraphrases in English seem to have been published between 1500 and 1700 [9] . Thomas died near Zwolle in 1471.

Thomas à Kempis wrote the biographies of New Devotion members—Gerard Groote, Floris Radewijns, Jan van de Gronde, and Jan Brinckerinck. [10] His important works include a series of sermons to the novices of St. Augustine Monastery, including Prayers and Meditations on the Life of Christ, Meditations on the Incarnation of Christ, Of True Compunction of Heart, Soliloquy of the Soul, Garden of Roses, Valley of Lilies, and a Life [11] of St. Lidwina of Schiedam. Kempis's 1441 autograph manuscript of The Imitation of Christ is available in the Bibliothèque Royale in Brussels (shelfmark: MS 5455-61). [10]

The following quotes are attributed to him:

"If thou wilt receive profit, read with humility, simplicity, and faith, and seek not at any time the fame of being learned."

"At the Day of Judgement we shall not be asked what we have read, but what we have done." — The Imitation of Christ, Book I, ch. 3

"For man proposes, but God disposes" — The Imitation of Christ, Book I, ch. 19

"If, however, you seek Jesus in all things, you will surely find Him. " — The Imitation of Christ, Book II, ch. 7

— Shortened form of a motto often ascribed to, or associated with, Thomas a Kempis. The complete saying as reported by an early biographer is a mixture of Latin and Dutch and runs as follows: "In omnibus requiem quaesivi, sed non inveni, nisi in hoexkens ende boexkens", "I have sought everywhere for peace, but I have found it not, save in nooks and in books." [12]

A monument was dedicated to his memory in the presence of the archbishop of Utrecht in St Michael's Church, Zwolle, on November 11, 1897. In 1964, this church closed, causing his shrine to be moved to a new St. Michael's Church outside the centre of Zwolle. In 2005, this church also closed and his shrine was moved to the Onze-Lieve-Vrouw-ten-Hemelopneming kerk (Assumption of Mary church) in the centre of Zwolle. [13]

Gerard Groote, otherwise Gerrit or Gerhard Groet, in Latin Gerardus Magnus, was a Dutch Roman Catholic deacon, who was a popular preacher and the founder of the Brethren of the Common Life. He was a key figure in the Devotio Moderna movement.

The phrase "What would Jesus do?", often abbreviated to WWJD, became popular particularly in the United States in the late 1800’s after the widely read book by Charles Sheldon entitled, “In His Steps: What Would Jesus Do.” The phrase had a resurgence in the US and elsewhere in the 1990s and as a personal motto for adherents of Christianity who used the phrase as a reminder of their belief in a moral imperative to act in a manner that would demonstrate the love of Jesus through the actions of the adherents.

The Imitation of Christ is a Christian devotional book by Thomas à Kempis, first composed in Latin ca. 1418–1427. It is a handbook for spiritual life arising from the Devotio Moderna movement, of which Kempis was a member.

Sic transit gloria mundi is a Latin phrase that means "Thus passes the glory of the world".

The Brethren of the Common Life was a Roman Catholic pietist religious community founded in the Netherlands in the 14th century by Gerard Groote, formerly a successful and worldly educator who had had a religious experience and preached a life of simple devotion to Jesus Christ. Without taking up irrevocable vows, the Brethren banded together in communities, giving up their worldly goods to live chaste and strictly regulated lives in common houses, devoting every waking hour to attending divine service, reading and preaching of sermons, labouring productively, and taking meals in common that were accompanied by the reading aloud of Scripture: "judged from the ascetic discipline and intention of this life, it had few features which distinguished it from life in a monastery", observes Hans Baron.

Wilgefortis is a female saint of the Catholic Church whose legend arose in the 14th century, and whose distinguishing feature is a large beard. Her name is thought to have derived from the Latin "virgo fortis". In England her name was Uncumber, and in Dutch Ontkommer. In German lands she was known as Kümmernis. She was known as Liberata in Italy and Librada in Spain ("liberated"), and as Débarras ("riddance") in France. In places such as Sigüenza, Spain, she was sometimes conflated with another Saint Liberata, the sister of Saint Marina of Aguas Santas, whose feast was also celebrated on July 20. She was venerated by people seeking relief from tribulations, in particular by women who wished to be liberated ("disencumbered") from abusive husbands.

Devotio Moderna, or Modern Devotion, was a movement for religious reform, calling for apostolic renewal through the rediscovery of genuine pious practices such as humility, obedience, and simplicity of life. It began in the late fourteenth-century, largely through the work of Gerard Groote, and flourished in the Low Countries and Germany in the fifteenth century, but came to an end with the Protestant Reformation. It is most known today through its influence on Thomas à Kempis, the author of The Imitation of Christ, a book which proved highly influential for centuries.

Kempen is a town in the district of Viersen, in North Rhine-Westphalia, Germany. It is situated approximately 30 kilometres (19 mi) northwest of Düsseldorf, and 20 kilometres (12 mi) east of Venlo.

Wessel Harmensz Gansfort was a theologian and early humanist of the northern Low Countries. Many variations of his last name are seen and he is sometimes incorrectly called Johan Wessel. 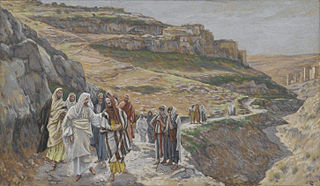 In Christian theology, the Imitation of Christ is the practice of following the example of Jesus. In Eastern Christianity, the term Life in Christ is sometimes used for the same concept.

The Imitation of Christ is the Christian ideal of following the example of Jesus.

Floris Radewyns was the co-founder of the Brethren of the Common Life.

Henry of Kalkar was a Carthusian writer.

Heinrich Brewer was a German Roman Catholic priest and historian. 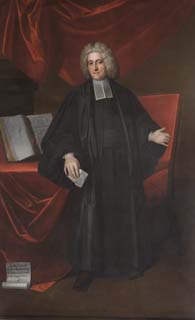 John King was an important English clergyman, the son of Thomas King. He was the younger brother of Thomas King, soldier and MP. He matriculated at Christ Church, Oxford on 4 July 1678, receiving his B.A. in 1682, his M.A. in 1685, and his B.D. and D.D. in 1704. He then became the rector of Shalden, Hampshire. From the mid-1690s, he was Preacher at the Charterhouse School, and, upon the death of Thomas Burnet in 1715, King was made Master of Charterhouse. A devout man who carried a copy of Thomas à Kempis's Imitation of Christ with him everywhere, King had a formative influence on John Wesley, who was a gownboy at the Charterhouse School 1714-1720. King was made Archdeacon of Colchester in 1722, and a Canon of Bristol in 1728.

Christian devotional literature is religious writing that is neither doctrinal nor theological, but designed for individuals to read for their personal edification and spiritual formation. Theologian Karl Holl has suggested that devotional literature came into full development at the time of Pietism during the second half of the 17th century. 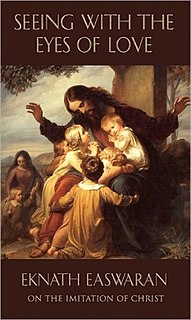 Seeing with the Eyes of Love by Eknath Easwaran is a practical commentary on The Imitation of Christ, a Christian devotional classic of the early 15th century, believed to be the work of Thomas à Kempis. Easwaran's commentary emphasizes how to translate the Imitation into daily living with the aid of spiritual practices. Seeing with the Eyes of Love was originally published in the United States in 1991. A German translation was published in 1993, and a second U.S. edition was published in 1996. The book has been reviewed in newspapers, magazines, and websites.

Hendrik Mande was a Dutch mystical writer, an early member of the Brethren of the Common Life, and an Augustinian Canon.

Nicolaus van Winghe was a Catholic Bible translator from the Habsburg Netherlands.