Thomas Edvin Berntsen (born 31 July 1970) is a Norwegian football coach and former football defender. As a player, Berntsen is most notable for his time at Lillestrøm and Vålerenga in Tippeligaen and the Austrian club Bregenz. After his retirement he has been head coach of Lørenskog, Kongsvinger and Strømmen.

He was born in Oslo, and started his career in Strømmen before he moved to Lillestrøm where he played 65 matches in Tippeligaen from 1993 to 1996. He then moved to Vålerenga where he played 45 league-matches between 1997 and 1999 and also won the Norwegian Football Cup in 1997.

In 2000, Berntsen moved to the Austrian club SW Bregenz, where his former teammate from Lillestrøm, Jan Ove Pedersen also were playing. [2] After playing three matches in six months for Bregenz, he was loaned out to Bryne where he played five matches in Tippeligaen before he retired after one season with Bærum in 2001 Norwegian Second Division.

In 2006, Berntsen was the head coach of the third-tier club Lørenskog [3] and John Carew's youth club was fighting promotion alongside Notodden. In the decisive match of 2006 Norwegian Second Division, Notodden won 5–3 against Lørenskog at home, and was promoted to Adeccoligaen. [4]

Even though Lørenskog was not promoted, Berntsen was head coach of a second-tier team in 2007 since Kongsvinger hired him as Vegard Skogheim's successor on 6 November 2006. Berntsen led Kongsvinger to a strong fourth place in 2007 Adeccoligaen, two points behind Bryne which played promotion play-off. With two points in the six first matches of the 2008-season, and Kongsvinger positioned at the bottom of the table, Berntsen was fired on 7 May 2008. [5]

On 3 August 2008 he was hired as head coach of his youth-club Strømmen, [6] and saved the club from relegation to Norwegian Third Division. Ahead of the 2009-season, Petter Myhre was named co-coach together with Berntsen. [7] With Berntsen and Myhre as coaches, Strømmen won their 2009 Norwegian Second Division group and was promoted to Adeccoligaen. In 2010 Strømmen finished three points behind the play-off promotion. The next season, Myhre had resigned from the job at Strømmen and was replaced by Andreas Holter which would be leading Strømmen together with Berntsen. [8] In the decisive match of the 2011-season, Strømmen avoided relegation with a 6–1 win against Nybergsund. [9]

In July 2011, Nettavisen named Berntsen as one of the most talented football-coaches in Norway. [10] Berntsen's contract ended after the 2011-season, and he was replaced by Erland Johnsen. [11] In December 2011, Berntsen was linked to the vacant job as head coach of the Tippeliga-club Stabæk, [12] but according to Norwegian TV 2 Berntsen recejeted Stabæk's offer. [13] Ahead of the 2013 season he was named as director of sports in Sarpsborg 08 FF. [14] 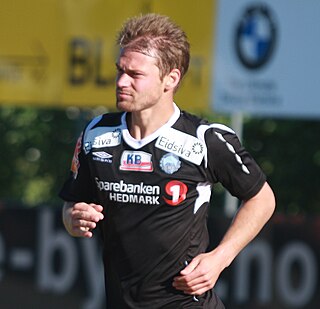 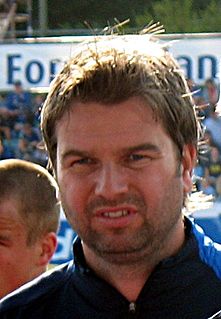 Petter Myhre is a retired Norwegian footballer and current assistant coach for Lillestrøm.

Olav Dalen is a Norwegian footballer goalkeeper, who play for Nordre Land. He made his debut for Kongsvinger in Tippeligaen in 2010 and has also played for Raufoss, Ullensaker/Kisa, Randaberg, Nybergsund and Haugesund.

Joackim Jørgensen; is a Norwegian professional footballer who plays for IK Start in the Norwegian 1. divisjon.

The 2013 season was Stabæk's 1st season back in the Adeccoligaen following their relegation in from the Tippeligaen in 2012. It was their second season with Petter Belsvik as their manager, in which they finished second in the league, earning promotion back to the Tippeligaen, and reached the Fourth Round of the Cup.

The 2014 season is Sarpsborg 08's 3rd season in Tippeligaen, following their return to the top level in 2012. It is also their second, and final, season with Brian Deane as the club's manager, after he announced he would be leaving the club at the end of the season.

The 2020 1. divisjon is a Norwegian second-tier football league season.