Thomas Bilney was born around 1495 in Norfolk, most likely in Norwich. Nothing is known of his parents except that they outlived him. He entered Trinity Hall, Cambridge at a young age, around the year 1510. During his life he was nicknamed Little Bilney because of his short stature. [1]

At Cambridge, he studied law, graduating LL.B. and taking holy orders in 1519. [2] Finding no satisfaction in the mechanical system of the schoolmen, he turned his attention to the Greek edition of the New Testament published by Erasmus in 1516.

During his reading in the Epistles, he was struck by the words of 1 Timothy 1:15, which in English reads, "This is a faithful saying, and worthy of all acceptation, that Christ Jesus came into the world to save sinners; of whom I am the chief." "Immediately", he records, "I felt a marvellous comfort and quietness, insomuch that my bruised bones lept for joy, Psal. 51:8. After this, the Scripture began to be more pleasant unto me than the honey or the honeycomb; wherein I learned that all my labours, my fasting and watching, all the redemption of masses and pardons, being done without truth in Christ, who alone saveth his people from their sins; these I say, I learned to be nothing else but even, as St. Augustine saith, a hasty and swift running out of the right way".

The Scriptures now became his chief study, and his influence led other young Cambridge men to think along the same lines. Among his friends were Matthew Parker, the future Archbishop of Canterbury, and Hugh Latimer. Latimer, previously a strenuous conservative, was completely won over, and a warm friendship sprang up between him and Bilney. "By his confession", said Latimer, "I learned more than in twenty years before".

In 1525 Bilney obtained a licence to preach throughout the diocese of Ely. He denounced saint and relic veneration, together with pilgrimages to Walsingham and Canterbury, and refused to accept the mediation of the saints. [3] The diocesan authorities raised no objection, considering his diverging views to be of minor relevance to the essentials of the christian faith.

Cardinal Wolsey took a different view. In 1526 he appears to have summoned Bilney before him. On his taking an oath that he did not hold and would not disseminate the doctrines of Martin Luther, Bilney was dismissed. But in the following year serious objection was taken to a series of sermons preached by him in and near London, and he was dragged from the pulpit while preaching in St George's chapel, Ipswich, arrested and imprisoned in the Tower. Arraigned before Wolsey, William Warham, Archbishop of Canterbury, and several bishops in the chapter-house at Westminster Abbey, he was convicted of heresy, sentence being deferred while efforts were made to induce him to recant, which eventually he did.

After being kept for more than a year in the Tower, he was released in 1529, and went back to Cambridge. Here he was overcome with remorse for his apostasy, and after two years he was determined to preach again what he had held to be the truth. The churches being no longer open to him, he preached openly in the fields, finally arriving in Norwich, where the bishop, Richard Nix, caused him to be arrested. Articles were drawn up against him by Convocation, he was tried, degraded from his orders and handed over to the civil authorities to be burned. The sentence was carried out at Lollards Pit, Norwich on 19 August 1531. [3] After witnessing Bilney's death, Bishop Nix is reported to have said, "I fear I have burned Abel and let Cain go". [4]

A parliamentary inquiry was threatened into this case, not because Parliament approved of Bilney's doctrine but because it was alleged that Bilney's execution had been obtained by the ecclesiastics without the proper authorisation by the state. In 1534 Bishop Nix was condemned on this charge to the confiscation of his property. 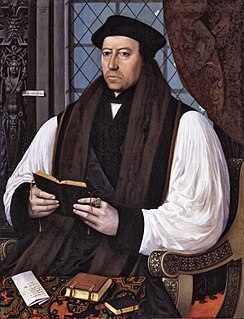 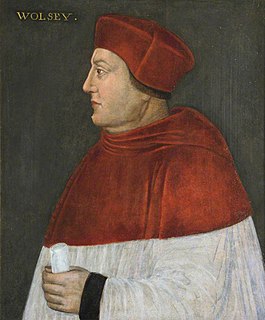 Thomas Wolsey was an English archbishop, statesman and a cardinal of the Catholic Church. When Henry VIII became King of England in 1509, Wolsey became the King's almoner. Wolsey's affairs prospered, and by 1514 he had become the controlling figure in virtually all matters of state. He also held important ecclesiastical appointments. These included the Archbishopric of York – the second most important role in the English church – and acting as papal legate. His appointment as a cardinal by Pope Leo X in 1515 gave him precedence over all other English clergy. 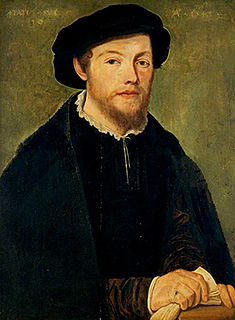 George Wishart was a Scottish Protestant Reformer and one of the early Protestant martyrs burned at the stake as a heretic. George Wishart or Wisehart was the son of James and brother of Sir John of Pitarrow, both ranking themselves on the side of the Reformers. He was educated at the University of Aberdeen, then recently founded, and travelled afterwards on the Continent. It is thought that it was while he was abroad that he first turned attention to the study of the Reformed doctrines. He engaged for some time in teaching at Montrose. Wishart afterwards proceeded to Cambridge and resided there for about six years, from 1538-1543. He returned to Scotland in the train of the Commissioners who had been appointed to arrange a marriage with Prince Edward and the Queen of Scots. He preached to the people with much acceptance at Montrose, Dundee, and throughout Ayrshire. On passing East to the Lothians, Wishart, who spoke latterly as in near prospect of death, was apprehended by Bothwell in the house of Cockburn, of Ormiston, and carried captive to St. Andrews, where he was tried by a clerical Assembly, found guilty, and condemned as an obstinate heretic. He was executed next day at the stake on Castle Green, his persecutor, Bethune, looking on the scene from the windows of the castle, where he himself was to be assassinated within three months.

Patrick Hamilton was a Scottish churchman and an early Protestant Reformer in Scotland. He travelled to Europe, where he met several of the leading reformed thinkers, before returning to Scotland to preach. He was tried as a heretic by Archbishop James Beaton, found guilty and handed over to secular authorities to be burnt at the stake in St Andrews. 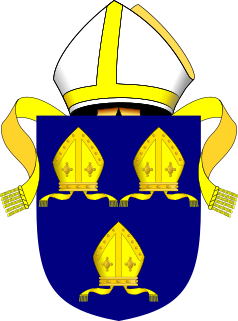 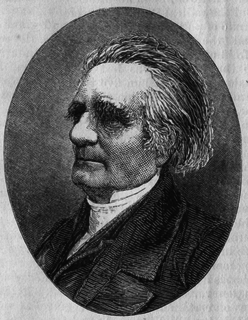 Jean-Henri Merle d'Aubigné was a Swiss Protestant minister and historian of the Reformation. 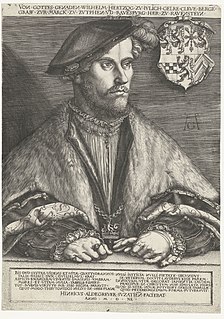 David Lindsay (1531–1613) was of the twelve original ministers nominated to the "chief places in Scotland" in 1560. In 1589 as one of the recognised leaders of the Kirk and as chaplain of James VI of Scotland, Lindsay accompanied James to Norway to fetch home his bride. He was appointed bishop of Ross and a privy councillor in 1600. He died in 1613 and his body was interred at Leith.

Edward Crome was an English reformer and courtier.

A mumpsimus is a "traditional custom obstinately adhered to however unreasonable it may be", or "someone who obstinately clings to an error, bad habit or prejudice, even after the foible has been exposed and the person humiliated; also, any error, bad habit, or prejudice clung to in this fashion". Thus it may describe behaviour or the person who behaves thus. For example, all intensive purposes is a common eggcorn of the fixed expression all intents and purposes; if a person continues to say the eggcorn even after being made aware of the correct form, either the speaker or the phrase may be called a mumpsimus.

The Littlemore Priory scandals took place between 1517 and 1518. They involved accusations of sexual immorality and sometimes brutal violence among the nuns and the prioress of Littlemore Priory. The Oxfordshire Benedictine priory, which was very small and poor, had a history of troubled relations with its bishop. The scandal that came to light in 1517, however, became enough of a cause célèbre to contribute to the priory's eventual suppression in 1525. Katherine Wells, the prioress of Littlemore at that time, ran the priory with strict and often violent discipline. She was accused of regularly putting nuns in the stocks for extended periods, as well as physically assaulting them. She also had a baby by the priory's chaplain and had pawned the priory's jewels to pay for the child's upbringing. She entertained men in her parlour, even after the bishop had been made aware of the accusations, which involved heavy drinking. At least one other nun also had a child. On one occasion a number of the nuns broke out of the priory through a window and escaped into the surrounding villages for some weeks.