Thomas Bjørn (born 18 February 1971) is a professional golfer from Denmark who plays on the European Tour. He is the most successful Danish golfer to have played the game having won fifteen tournaments worldwide on the European Tour. In 1997 he also became the first Dane to qualify for a European Ryder Cup team. Bjørn is remembered for his collapse at Royal St. George's during the 2003 Open Championship, when he led by two strokes with three holes to play, but took three attempts to get out of a greenside bunker on the par three 16th, handing the tournament to Ben Curtis. He captained the winning European side at the 2018 Ryder Cup.

Bjørn started his career playing on the Challenge Tour from 1993 to 1995. In 1995 he won four tournaments on the Challenge Tour to earn his card for his debut year on the European Tour in 1996. Bjørn made his breakthrough immediately winning his maiden tour title in his debut season at the Loch Lomond World Invitational. He became the first golfer from Denmark to win a tournament on the European Tour. [3] He finished the 1996 season placed tenth on the Order of Merit.

The follow up season in 1997 was steady with a number of top ten finishes without a win, however Bjørn did not have long to wait until his next win arrived. He won early in the 1998 season in Perth, Australia taking the Heineken Classic for his second European Tour title. Despite an over par final round of 74, Bjørn won by a single stroke from Ian Woosnam. In April 1998, after a five-week break from competitive golf, Bjørn won for the second time that year at the Peugeot Open de Espana after a final round 66 took him to 21 under and one stroke ahead of the chasing pack. He later said: "I didn’t really expect this after taking five weeks off, but when your confidence has gone like mine did after winning in Perth, it just shows it’s best to take a break and regroup." [4] After his two wins he finished the year 6th on the Order of Merit.

After a winless period due to injuries and the birth of his first child, Bjørn returned to the winner's circle in October 1999 at the Sarazen World Open. This was his fourth career European Tour win and after an unspectacular year, he jumped up the standings to finish the season 14th on the Order of Merit.

He has finished in the top ten on the Order of Merit eight times with a best finish of fifth in 2000. He has come close to winning a major championship at the 2003 Open Championship when he was in the lead with 4 holes to play before a slump handed victory to Ben Curtis. At the 2005 PGA Championship, he was tied for the lead before finishing as runner-up to Phil Mickelson in a second-place tie with Steve Elkington.

Bjørn picked up his first European Tour win in four years and 10th of his career in 2010 at the Estoril Open de Portugal, winning with a score of 23-under-par, five better than Richard Green. He followed this with three more wins at the Commercialbank Qatar Masters in February 2011, Johnnie Walker Championship at Gleneagles in August 2011, winning in a five-man playoff on the fifth extra hole, birdieing the final three holes and Omega European Masters in September 2011. It was Bjørn's 13th career European Tour win.

In 2005 and 2006, Bjørn sponsored the Thomas Bjørn Open, an event on the Challenge Tour played in his home country. [7] In 2007, Bjørn was elected chairman of the European Tour's tournament committee.

Bjørn's last name is sometimes written Björn or Bjorn outside Denmark. The Danish (and Norwegian) letter 'ø' represents approximately the same sound as 'ö' in German and Swedish. Literally translated, his surname means bear in Danish.

Bjørn has three children, Filippa and twins Oliver and Julia with his former wife Pernilla. Bjørn currently resides in London. [9] Perth-born air stewardess Dagmara Leniartek had a five-year affair with Bjørn. Bjørn initially cut relations with Leniartek and denied he was the father of her daughter. However, Danish media reported a DNA test had subsequently proved Bjørn was the father of the child – a girl named Isabella. [10] [11] [12]

Bjørn is a football fan and a keen follower of Liverpool F.C.. Alongside football he also states his other interest to be movies. [13]

1Co-sanctioned by the European Tour

Results not in chronological order prior to 2015.

Pádraig Peter Harrington is an Irish professional golfer who plays on the European Tour and the PGA Tour. He has won three major championships: The Open Championship in 2007 and 2008 and the PGA Championship, also in 2008. He spent over 300 weeks in the top-10 of the world rankings, and reached a career-high ranking of third in July 2008.

David Alexander Howell is an English professional golfer. His career peaked in 2006, when he won the BMW Championship and was ranked in the top 10 of the Official World Golf Ranking for a short time. He played in the Ryder Cup in 2004 and 2006.

Darren Christopher Clarke, is a professional golfer from Northern Ireland who currently plays on the PGA Tour Champions and has previously played on the European Tour and PGA Tour. He has won 21 tournaments worldwide on a number of golf's main tours including the European Tour, the PGA Tour, the Sunshine Tour and the Japan Golf Tour. His biggest victory came when he won the 2011 Open Championship at Royal St George's in England, his first major win after more than 20 years and 54 attempts.

Paul Stewart Lawrie is a Scottish professional golfer who is best known for winning The Open Championship in 1999. He was a vice-captain for the European Ryder Cup team in 2016. 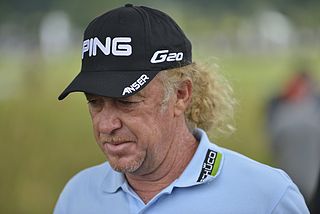 Miguel Ángel Jiménez Rodríguez is a Spanish professional golfer. He has won 21 times on the European Tour and has been a member of two victorious Ryder Cup teams.

Robert Karlsson is a Swedish professional golfer who has played on the European Tour and the PGA Tour and plays on the PGA Tour Champions.

Graeme McDowellMBE is a professional golfer from Northern Ireland who plays on both the PGA Tour and European Tour. He is well known for winning the 2010 U.S. Open at Pebble Beach, where he ended a 40-year drought for Europeans at the tournament.

Costantino Rocca is an Italian golfer. He was long known as the most successful male golfer that Italy has produced, until the 2018 success of Francesco Molinari, who credited Rocca as an inspiration to him following his Open victory. After a long career on the European Tour, Constantino is now playing on the European Seniors Tour. He has five European Tour wins and is best known for his second-place finish in the 1995 Open Championship, and his hole in one in 1995 Ryder Cup.

Eamonn Christopher Darcy is an Irish professional golfer. He won four times on the European Tour and played in the Ryder Cup four times. 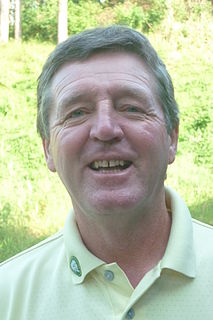 Peter Joseph Butler is an English professional golfer. He was one of the leading British golfers of the 1960s and early 1970s. He won a number of important tournaments, played in four Ryder Cup matches between 1965 and 1973 and featured in the top 60 on the British and later European Tour Order of Merit every year from 1959 to 1978.

Oliver John Wilson is an English professional golfer. Wilson was a member of the 2008 Ryder Cup, but had to wait six years for his first European Tour win, the 2014 Alfred Dunhill Links Championship. 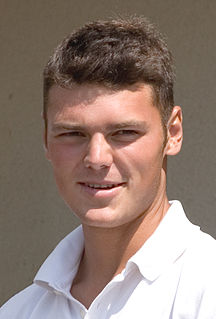 Martin Kaymer is a German professional golfer. A winner of two major championships, he was also the No. 1 ranked golfer in the Official World Golf Ranking for eight weeks in 2011.

Rafael Cabrera-Bello is a Spanish professional golfer who plays on the European Tour, where he has won three times, and the PGA Tour.