Born near Dubuque,Iowa,on May 22,1839,Power attended public school and graduated from Sinsinawa College with a degree in engineering. He then worked as a surveyor in Dakota until 1860,when he entered the employ of an engineering company. There,he participated in government land surveys covering much of Iowa and what was then the Dakota Territory. [2] Between 1861 and 1867,he was primarily engaged in trade along the Mississippi River,eventually becoming president of a steamer line. [3] Power first came to Montana in 1864,partnering in his enterprises with his brother,J.W. Power. [2] After settling in Helena in 1876 Power started T. C. Power and Bro,which was a mercantile company through the northwestern United States and western Canada. [3]

In 1889,Power ran unsuccessfully for Governor of Montana,winning the nomination of the Republican Party on the first ballot, [5] but losing the general election to Democratic candidate Joseph Toole,the only Democrat on the state ticket that year to be elected. [6] A conflict erupted over the respective roles of the governor and the state legislature in appointing the first two members of the United States Senate for the state, [7] but on January 2,1890,the Republican-controlled legislature elected Power to the second seat, [8] which he then held until March 3,1895.

Power died at his home in Helena on February 16,1923,and was interred in Resurrection Cemetery. The town of Power in Montana is named after him. [3]

William Boyd Allison was an American politician. An early leader of the Iowa Republican Party,he represented northeastern Iowa in the United States House of Representatives before representing his state in the United States Senate. By the 1890s,Allison had become one of the "big four" key Republicans who largely controlled the Senate,along with Orville H. Platt of Connecticut,John Coit Spooner of Wisconsin and Nelson W. Aldrich of Rhode Island. 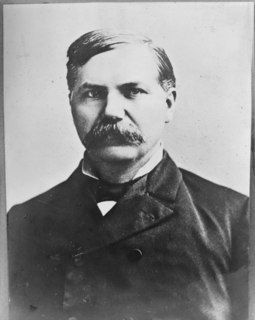 David Bremner Henderson,a ten-term Republican congressman from Dubuque,Iowa,was the speaker of the United States House of Representatives from 1899 to 1903. He was the first congressman from west of the Mississippi River,the last Civil War veteran,the second foreign-born person,and the only Iowan to serve as Speaker. 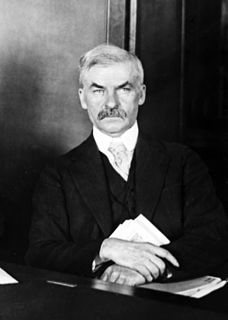 Thomas James Walsh was an American lawyer and Democratic Party politician from Helena,Montana who represented Montana in the US Senate from 1913 to 1933. He was initially elected by the state legislature,and from 1918 on by popular vote,in keeping with the requirements of the Seventeenth Amendment to the United States Constitution.

Maurice Connolly was elected in 1912 to a single term as a Democratic member of the U.S. House of Representatives from Iowa's 3rd congressional district. After giving up his House seat in an unsuccessful bid for election to the U.S. Senate in 1914,Connolly then served as an aviation officer in World War I and died in a plane crash in 1921.

Thomas Henry Carter was an American politician,who served as territorial delegate,a United States representative,and a U.S. Senator from Montana. Carter was born in Junior Furnace,Ohio,on October 30,1854. Born to an Irish immigrant family,he spent most of his childhood in on small farms in the Midwest. In 1882,he moved to Helena,Montana to begin his law career there. He entered then politics,and was elected Montana's territorial delegate in 1888. Following Montana's admission into the union as a state,Carter represented the state in U.S. House of Representatives. He ran for re-election in 1890,but was narrowly defeated by Democrat William W. Dixon in the general election. 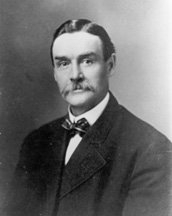 Coe Isaac Crawford was an American attorney and politician from South Dakota. He served as the sixth Governor and as a U.S. Senator.

Lee Mantle was an American businessman and politician from Montana. A Republican,he was most notable for his service as a United States Senator from 1895 to 1899. 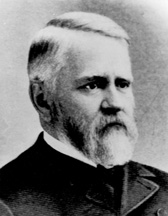 Gideon Curtis Moody was an attorney and politician,elected in 1889 as a Republican United States Senator from South Dakota. He served two years. He also had served five years as an associate justice of the Dakota Territory Supreme Court,from 1878-1883,before entering private practice for a period as general counsel for Homestake Mine.

Martin Nelson Johnson was an American attorney and politician who served as a United States representative and senator from North Dakota.

John Alfred Pickler was an American politician. He served as a member of the United States House of Representatives.

The 1867 United States Senate election in New York was held on January 15,1867,by the New York State Legislature to elect a U.S. Senator to represent the State of New York in the United States Senate. Incumbent Senator Ira Harris was not renominated for a second term in office. U.S. Representative Roscoe Conkling was elected to succeed him.

The 1900 and 1901 United States Senate elections were elections in which the Democratic Party gained two seats in the United States Senate,and which corresponded with President William McKinley's landslide re-election. By the beginning of the next Congress,however,the Republicans gained five additional seats,giving them a ten-seat majority.

The 1888 and 1889 United States Senate elections were elections that coincided with Benjamin Harrison's victory over incumbent President Grover Cleveland. Both parties were unchanged in the regular elections,but later special elections would give Republicans an eight-seat majority,mostly from newly admitted states.

United States gubernatorial elections were held in 1889,in eleven states.