Stanford was born in Logan, Utah Territory, a son of Stephen and Louisa (Forman) Stanford. His father, a native of England, came to Utah Territory in 1861. Of the ten children, Thomas C. was the fifth and was four years old when the family moved to Salt Lake City, where he grew up and received a basic education. He later attended the Brigham Young Academy. [1]

In 1884, at age nineteen he moved to Albion, Idaho. After a brief stay there, he located a homestead in the Little Wood River valley, which was the center of his operations as a rancher and stockman. Along with operating his own ranch, Stanford also worked for a number of years as a cowboy, stage driver, and freighter. [2]

In 1895 he bought additional land and engaged in sheep raising as well a continuing his interests in cattle and horses. He was regarded as one of the most successful livestock producers in Idaho. In his later years he also raised hogs on an extensive scale. His home place consisted of 160 acres (64.7 hectares) near Carey, Blaine County, Idaho. Further down the valley he had 250 acres (101.2 hectares) of land. Both farms were under irrigation and capable of producing fine crops. [1]

Stanford continued actively in the sheep business until 1918. He then sold his flocks and focused on general ranching and cattle raising. Over the years he replaced the family's original log home with "a beautiful and commodious residence" and similarly upgraded the ranching structures. [2]

Stanford was instrumental in the organized activities of Idaho stock growers and in 1908-10 served as president of the Idaho Wool Growers Association. [3] He was instrumental in getting much legislation passed beneficial to wool growers, and as president of the association called the first meeting that led to the organization of the National Wool Warehouse. [1] Western wool growers organized the National Wool WareHouse and Storage Company at a 1909 meeting in Chicago. Their intent was to deal cooperatively with wool buyers to regularize pricing and avoid wide swings in the supply-demand situation. [4]

Stanford was a Republican member of the Ninth Idaho Legislature in the lower house (1907), and Governor Hawley appointed him a member of the livestock board of the state. For many years he played an active and influential role at the Republican state convention. Supporters and friends urged him to run for governor in 1912, but he declined. [1] He did serve in Blaine County as a Justice of the Peace and in other local offices. [2]

In June 1900, he married Ida Ivie, daughter of John Ivie, an old Indian scout, who served during the early Indian wars in Utah. The four children of their marriage were: Roka, Esther, Charles, and Frank.

Mr. Stanford was for a number of years actively connected with The Church of Jesus Christ of Latter-day Saints and served as a missionary in New Zealand for three years and for two years in the United States. [1]

Mr. Stanford assisted in developing irrigation projects in Blaine County and surrounding parts of Idaho. In fact, his name seems to have been associated both as a worker and liberal contributor to all the community development projects in the Little Wood River valley for many years. He was an organizer of the local telephone company at Carey, served as vice president of the company, and was afterward elected its president. He was also one of the organizers of the Carey State Bank and at one time was president of the Cooperative Store. [1]

He moved to Boise, Idaho in 1945 due to ill health and died there. He is buried in the Cloverdale Memorial Park, west of Boise. [5]

The United States Bureau of Reclamation (USBR), and formerly the United States Reclamation Service, is a federal agency under the U.S. Department of the Interior, which oversees water resource management, specifically as it applies to the oversight and operation of the diversion, delivery, and storage projects that it has built throughout the western United States for irrigation, water supply, and attendant hydroelectric power generation. Currently the USBR is the largest wholesaler of water in the country, bringing water to more than 31 million people, and providing one in five Western farmers with irrigation water for 10 million acres of farmland, which produce 60% of the nation's vegetables and 25% of its fruits and nuts. The USBR is also the second largest producer of hydroelectric power in the western United States. 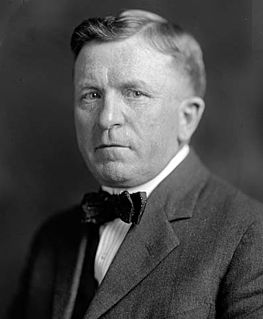 David William Davis was an American politician who served as the 12th governor of Idaho from 1919 to 1923. He later served briefly as commissioner of the United States Bureau of Reclamation in 1923 and 1925. He later became a special assistant to the United States Secretary of the Interior.

The Treasure Valley is a valley in the western United States, primarily in southwestern Idaho, where the Payette, Boise, Weiser, Malheur, Owyhee, and Burnt rivers drain into the Snake River. It includes all the lowland areas from Vale in rural eastern Oregon to Boise, and is the most populated area in Idaho.

Leonard Beck Jordan was an American politician who served as the 23rd governor of Idaho and a United States Senator for over ten years.

Hamer Harold Budge was an American attorney politician. He was a five-term congressman from Idaho and later chaired the Securities and Exchange Commission.

Ira Burton Perrine was an Idaho farmer, rancher and businessman. Perrine is generally credited as the founder of Twin Falls and other towns in the Magic Valley region.

James Henry Hawley was an American attorney and politician from Idaho. He was state's ninth governor from 1911 to 1913, and the mayor of Boise from 1903 to 1905. He also acted as prosecutor or defense attorney for a substantial number of criminal cases. Outside of criminal law, he specialized in irrigation and mining cases.

Pete Thomas Cenarrusa was an American politician from Idaho. He served continuously for over half a century in elective office, first as a member of the Idaho Legislature and then as Secretary of State.

Samuel Hubbard Hays was an American politician and attorney who served as the Idaho Attorney General from January 2, 1899, until January 7, 1901, and as mayor of Boise, Idaho, from 1916 to 1919. 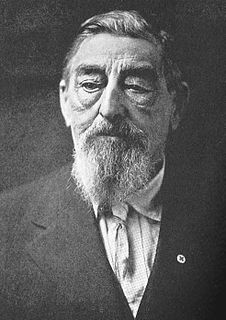 Alexander Toponce was an American pioneer in the Intermountain West region of the United States. His family immigrated to the United States from Belfort, France when he was seven and Alexander left home about three years later. He worked as a laborer for several years, mostly in the logging and lumber business, before becoming a teamster, stagecoach driver and freight handler. Toponce headed west when he was about fifteen years old, first to Missouri and then to the northern Intermountain West. There, he ran freight and stagecoach outfits, owned livestock herds, sometimes tried his hand at mining, and invested in all manner of development projects. He is credited with opening or improving many early freight and stage routes throughout the region. Later in life, he mostly invested in mining properties while holding interests in land development companies. Over his lifetime, Toponce made and lost several fortunes, the result of bad weather, Indian raids, unpredictable prices and dishonest partners.

Joseph Ronald Micheli, known as Ron Micheli, is a former director of the Wyoming Department of Agriculture who also served from 1977-1992 in the Wyoming House of Representatives. He ran a strong third-place finish as a candidate for the Republican gubernatorial nomination in 2010. His primary opponents were former U.S. Attorney Matt Mead, who won the nomination and later the general election, state auditor Rita Meyer, who placed second, and Speaker of the Wyoming House Colin M. Simpson of Cody, who finished in fourth place.

Thomas Jesse Drumheller was an American football player, lawyer and sheep rancher. He played college football as the quarterback for the University of Michigan in 1896 and was the roommate of Herbert Hoover at Stanford University. He was the son of a pioneer family of Walla Walla, Washington, and later became owner of one of the largest sheep ranches in the Pacific Northwest, with a ranch of nearly 25,000 acres. He was also the president of the Washington State Wool Growers Association from 1913 to 1948.

Jeff C. Siddoway was a Republican member of the Idaho Senate, representing the 35th district from 2006 through 2018.

Jean Bethine Clark Church, was the spouse of U.S. Senator Frank Church of Idaho. As politically active as her husband, she earned the nickname of "Idaho's third senator."

Carl Crabtree is an American rancher and a Republican Idaho State Senator since 2016 representing District 7. 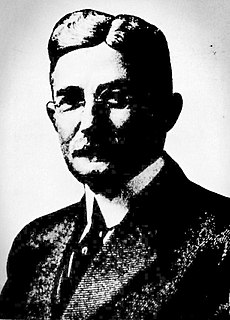 Walter E. Pierce was a prominent real estate speculator in Boise City, Idaho, USA, in the late 19th century and in the first half of the 20th century. Pierce served as mayor of Boise City 1895-97 as it evolved from being a frontier community to being a modern town.

Cyrus Y. Jacobs was a grain mill owner, distiller, and merchant in Boise, Idaho. He served as mayor of Boise City 1879–1880. 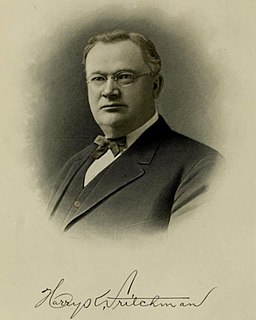 Harry K. Fritchman was a merchandise broker and warehouse owner in Boise, Idaho, USA, in the first half of the 20th century, and Fritchman served as mayor of Boise 1911–12.

James F. Ailshie was an American attorney and jurist who served as a justice of the Idaho Supreme Court, alternating as chief justice with other members of the court. First elected to the court in 1902, he became the youngest chief justice in the United States at the time. During his 24 years on the court, Ailshie wrote more than 700 opinions. At the time of his death, only one opinion in which he participated had been reversed by the U.S. Supreme Court.

Substantial passages of this article were copied directly, not just paraphrased, from the biography published in the 1914 Hiram T. French [1] reference.