Thomas Campbell Wasson (February 8, 1896 – 23 May 1948) was an American diplomat who was killed while serving as the Consul General for the United States in Jerusalem. He was also a member of the United Nations Truce Commission. [1]

Wasson was born February 8, 1896 in Great Falls, Montana and raised in Newark, New Jersey. [2] From 1926 to 1929, he served as the United States Vice Consul in Melbourne, Australia. In 1932, he was Vice Consul in Puerto Cortes, Honduras, and in 1938, became the Consul in Lagos, Nigeria. [3] In April 1948, Wasson was appointed as the Consul General for the US in Jerusalem.

On 19 May 1948, The Scotsman quoted a report by Wasson saying the British Consul had a "narrow escape" when the consulate came under gunfire. On 22 May, it was reported that Wasson had attempted to stop the Arab Legion shelling of the Hadassah Hospital and Hebrew University on Mount Scopus: "The American Consul is reported to have contacted the Legion requesting it to stop firing on Jewish positions in and around the buildings. The Legion's commander replied that the buildings were being used by Jewish forces to mortar and machine-gun the Arab-occupied Sheikh Jarrah quarter and handed the Consul surrender terms to convey to the Jews. The commander asked that all fighting Jews in the hospital and university surrender as prisoners of war and that all doctors, nurses, professors, and scientists be handed over to the Red Cross."

Later the same day, just after 2.00pm, Wasson was shot while returning to the US Consulate from a meeting of the UN Truce Commission at the French Consulate in Jerusalem. While crossing Wauchope Street (now Abraham Lincoln/Hess) to enter the alley leading to the consulate, he was shot by a .30 caliber rifle. The bullet entered his chest via his right upper arm and left level to his second costal cartilage. [4] Wasson died the following day. [5] [6]

Wasson's funeral was narrated by the American journalist Arthur Derounian (John Roy Carlson) in his book Cairo to Damascus. [7]

Wasson was replaced by Vice-Consul William Burdette. [8] Wasson's body was returned to the United States and interred at Washington National Cathedral.

The shooter was never identified. In the aftermath of the killing, there were contradictory reports on whether the gun was fired by an Arab or Jew. The New York Times reported on 23 May that Wasson "on his death bed stated that Arabs had shot him," but retracted the statement two weeks later. [9] On 25 May, The Scotsman newspaper quoted an Israeli government statement that Wasson "was killed by Arab bullets." According to The New York Post (NYP) on 8 June, sources in Amman claimed Wasson was shot by the Israelis, but that this was contradicted by Wasson's alleged last words in hospital. The NYP report claimed that an American government document stated that his dying words, to the Jewish nurses at his bedside, were that he had been shot by Arabs. [10]

In the first edition of her book "Our Jerusalem", a history of the American Colony in Jerusalem, Bertha Spafford Vester quotes her diary entry for 23 May 1948: "Our American Consul, Mr. Robert Wasson was shot by Jews on Friday and died today." [11]

In his account, published in 1960, the Military Governor of Jerusalem, Dov Joseph, wrote that Wasson "was shot on 22 May by an Arab sniper." [12]

On April 15, 1948, in a report concerning the Hadassah Hospital Convoy Massacre, Wasson wrote, "American correspondent eye witnessed removal from trucks large quantities arms and ammunition and speculated whether for escort or other purpose."

On April 17, 1948, he wrote: " . . . queried as to whether convoy included armoured cars, Haganah guards, arms and ammunition in addition to doctors, nurses and patients, Kohn [of the Jewish Agency] replied in affirmative saying it was necessary to protect convoy." [13]

On May 18, 1948, Wasson wrote: "Looting in the captured Arab areas has now been so widespread and has been regarded with such indifference by the authorities that it is difficult not to think it is officially tolerated." [14] 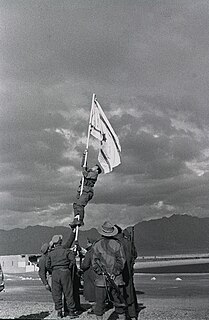 Killings and massacres during the 1948 Palestine war resulted in the deaths of hundreds of civilians and unarmed soldiers. 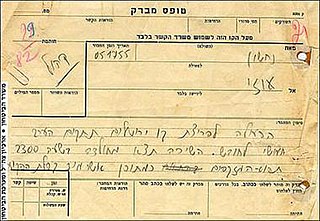 Operation Nachshon was a Jewish military operation during the 1948 war. Lasting from 5–16 April 1948, its objective was to break the Siege of Jerusalem by opening the Tel-Aviv – Jerusalem road blockaded by Palestinian Arabs and to supply food and weapons to the isolated Jewish community of Jerusalem. The operation was also known as "The operation to take control of the Jerusalem road,", following which participating units later broke-off to form the Harel Brigade.

The Hadassah convoy massacre took place on April 13, 1948, when a convoy, escorted by Haganah militia, bringing medical and military supplies and personnel to Hadassah Hospital on Mount Scopus, Jerusalem, was ambushed by Arab forces.

The Kfar Etzion massacre refers to a massacre of Jews that took place after a two-day battle in which Jewish Kibbutz residents and Haganah militia defended Kfar Etzion from a combined force of the Arab Legion and local Arab men on May 13, 1948, the day before the Israeli Declaration of Independence. Of the 129 Haganah fighters and Jewish kibbutzniks who died during the defence of the settlement, Martin Gilbert states that fifteen were murdered on surrendering. 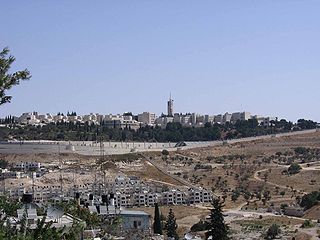 Mount Scopus is a mountain in northeast Jerusalem.

Hadassah, the Women's Organization of America is an American Jewish volunteer women's organization. Founded in 1912 by Henrietta Szold, it is one of the largest international Jewish organizations, with 330,000 members in the United States. Hadassah fundraises for community programs and health initiatives in Israel, including the Hadassah Medical Center, a leading research hospital in Israel renowned for its inclusion of and treatment for all religions and races in Jerusalem. In the US, the organization advocates on behalf of women's rights, religious autonomy and US-Israel diplomacy. In Israel, Hadassah supports health education and research, women's initiatives, schools and programs for underprivileged youth.

Katamon or Qatamon is a Jewish neighbourhood in south-central Jerusalem. The official Hebrew name, Gonen, is only used in municipal publications. Katamon is derived from the Greek κατὰ τῷ μοναστηρίῳ.

From November 1947 the roads to the four kibbutzim of Gush Etzion, south of Jerusalem were blockaded by militias from neighbouring villages. The Haganah used a strategy of armed convoys to get supplies to the outposts. The initial convoys to the bloc used open pickup trucks ("tenders"), since the British claimed that armored vehicles would irritate the Arabs. The convoys were accompanied by official Mandate police "monitors" (notrim) in uniform.

Chaim Yassky (1896–1948) was a physician and medical administrator in Jerusalem. He was killed in the Arab attack on a medical convoy bringing supplies to Hadassah Hospital on Mount Scopus.

The Jewish Quarter is one of the four traditional quarters of the Old City of Jerusalem. The 116,000 square meter area lies in the southeastern sector of the walled city, and stretches from the Zion Gate in the south, along the Armenian Quarter on the west, up to the Street of the Chain in the north and extends to the Western Wall and the Temple Mount in the east. In the early 20th century, the Jewish population of the quarter reached 19,000.

Hadassah Medical Center is an Israeli medical organization established in 1934 that operates two university hospitals at Ein Kerem and Mount Scopus in West Jerusalem as well as schools of medicine, dentistry, nursing, and pharmacology affiliated with the Hebrew University of Jerusalem. Its declared mission is to extend a "hand to all, without regard for race, religion or ethnic origin."

The Battle for Jerusalem occurred from December 1947 to 18 July 1948, during the 1947–48 Civil War in Mandatory Palestine. The Jewish and Arab populations of Mandatory Palestine and later the Israeli and Jordanian armies fought for control of Jerusalem.

James Grover McDonald was a United States diplomat. He served as the first U.S. Ambassador to Israel. 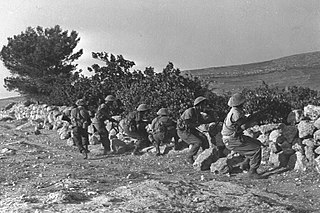 The 1947–1948 civil war in Mandatory Palestine was the first phase of the 1948 Palestine war. It broke out after the General Assembly of the United Nations adopted a resolution on 29 November 1947 recommending the adoption of the Partition Plan for Palestine. 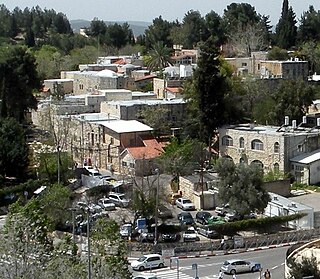 The Deir Yassin massacre took place on April 9, 1948, when around 120 fighters from the Zionist paramilitary groups Irgun and Lehi killed hundreds of Palestinian Arabs in Deir Yassin, a village of roughly 600 people near Jerusalem. The assault occurred as Jewish militia sought to relieve the blockade of Jerusalem during the civil war that preceded the end of British rule in Palestine.

Mordechai Weingarten was a Jewish community leader in Jerusalem during the British Mandate. 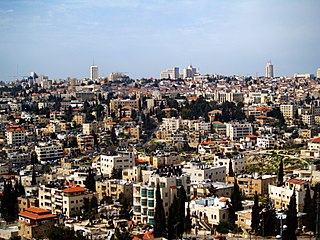 Sheikh Jarrah is a predominantly Palestinian neighborhood in East Jerusalem, 2 kilometers north of the Old City, on the road to Mount Scopus. It received its name from the 13th-century tomb of Sheikh Jarrah, a physician of Saladin, located within its vicinity. The modern neighborhood was founded in 1865 and gradually became a residential center of Jerusalem's Muslim elite, particularly the al-Husayni family. After the 1948 Arab-Israeli War, it straddled the no-man's land area between Jordanian-held East Jerusalem and Israeli-held West Jerusalem until the neighborhood was occupied by Israel in the 1967 Six-Day War. It is currently the center of a number of property disputes between Palestinians and Israelis. Most of its present Palestinian population is said to come from refugees expelled from Jerusalem's Talbiya neighbourhood in 1948.

Street of the Prophets is an east–west axis road in Jerusalem beginning outside Damascus Gate and ending at Davidka Square. Located to the north of Jaffa Road, it bisects the neighborhood of Musrara.

Events in the year 1948 in the British Mandate of Palestine.