Thomas Cranley DD a.k.a. Thomas Craule ( c.1340–1417) was a leading statesman, judge and cleric in early fifteenth-century Ireland, who held the offices of Chancellor of Oxford University, [1] Archbishop of Dublin and Lord Chancellor of Ireland.

He was born in England about 1340; little seems to be known about his family. He entered the Carmelite order. He is recorded as a Fellow of Merton College, Oxford, in 1366. He became Warden of New College in 1389 [2] and Chancellor of the University of Oxford in 1390. [3] He was a Doctor of Divinity and a judge. [4]

In 1397, on the death of Richard Northalis, he was made Archbishop of Dublin and arrived in Ireland the following year. After the accession of King Henry IV, Cranley undertook a diplomatic mission to Rome, and was made Lord Chancellor of Ireland in 1401. When Henry's son Thomas, Duke of Clarence, was made Lord Deputy of Ireland, Cranley was appointed to his council. A letter which he sent to the King around the end of 1402 painted a grim picture of the state of English rule in Ireland. Cranley assured the King of his absolute loyalty to both the King and his son, but implored the King to send over money and men since "your son is so destitute of money that he has not a penny in the world ... and his soldiers have departed from him, and the people of his household are on the point of leaving." [5] The King, who was generally short of money, is not known to have responded to this plea. Cranley himself could probably have contributed something to the Deputy's expenses: certainly, he was sufficiently well off to lend the Mayor of Dublin 40 marks in 1402. [6]

The pressure of official business, combined with the effects of ill health and old age, made Cranley increasingly unfit to perform his duties, and in his later years the functions of the Chancellor were usually carried out by his deputies, first Thomas de Everdon, then Laurence Merbury. Cranley resigned as Chancellor in 1410, but in 1413 the new King Henry V reappointed him to that office. This is a tribute to the high regard in which the Lord Lieutenant of Ireland, the Earl of Shrewsbury, held him. He also acted as Justiciar of Ireland, following the sudden death of Sir John Stanley, although in view of his age and ill health it was understood that this was only a temporary appointment. As Justiciar he was assisted by a military council, made up of such noted soldiers as the Gascony-born knight Sir Jenico d'Artois. [7]

He became prebendary of Clonmethan in north County Dublin in 1410: in 1414 he was sued by the Crown for recovery of the profits of the prebend for the previous two years, on the grounds that he had been an absentee prebend, but the lawsuit was dismissed when Cranley produced the King's letters patent authorising his absence. [8]

In 1417 he was asked to present a memorial on the state of Ireland, which was highly critical of Lord Shrewsbury's record as Lord Lieutenant, to the English Crown. He reached England, but he was an old man even by modern standards, and in frail health. The journey proved to be too much for his constitution, and he died at Faringdon in Oxfordshire on 25 May. He was buried in New College, Oxford: his memorial brass survives, and the inscription on his tomb hails him as "the flower of prelates". [3]

Early historians praised Cranley for both his mental and physical qualities: "thou art fair beyond the children of men, grace is diffused through thy lips because of thine eloquence" wrote one particularly eloquent admirer. He was described as tall and commanding in appearance, with fair hair and a ruddy complexion; his personality was witty, eloquent and learned. As a cleric, he was described as charitable to the poor, a notable preacher and a great builder of churches. [5] The Parliament of Ireland in 1421 praised him as the model of what a good chief governor should be. [9]

Events from the year 1341 in Ireland. 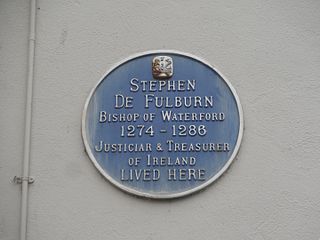 Stephen de Fulbourn was an English-born cleric and politician in thirteenth-century Ireland: he was Justiciar of Ireland, and Archbishop of Tuam 1286–88. He was a member of the Order of Knights Hospitallers.

Fromund le Brun was a cleric and judge in thirteenth-century Ireland who became Lord Chancellor of Ireland. He lost a long battle to become Archbishop of Dublin, due to his notorious pluralism. He also clashed bitterly with the Archbishop of Cashel, David Mac Cerbaill.

Thomas Cantock, Quantock or Cantok was an English-born cleric and judge in medieval Ireland, who held the offices of Bishop of Emly and Lord Chancellor of Ireland.

Richard Wogan was an Irish judge and cleric who held the office of Lord Chancellor of Ireland, and also served as a soldier.

Robert Wikeford or de Wikeford was an English-born diplomat, lawyer and judge, who became Lord Chancellor of Ireland and Archbishop of Dublin.

John Colton was a leading English-born academic, statesman and cleric of the fourteenth century. He was the first Master of Gonville and Caius College, Cambridge. He spent much of his career in Ireland, where he held the offices of Treasurer of Ireland, Lord Chancellor of Ireland and Archbishop of Armagh. He is chiefly remembered today for his book The Visitation of Derry (1397), which he either wrote or commissioned.

Thomas Le Boteller, or Thomas Butler, nicknamed Thomas Bacach or Thomas the Lame, was the illegitimate son of the 3rd Earl of Ormond, and a leading political figure in early fifteenth century Ireland. He held the offices of Lord Chancellor of Ireland, Lord Deputy of Ireland and Prior of Kilmainham. In his own lifetime, he was a highly unpopular statesman, who was accused of treason. He is now chiefly remembered as a professional soldier, who was present at the Siege of Rouen in 1418–19. He had previously fought in the sanguinary conflict known as the Battle of Bloody Bank near Dublin in 1402.

John L'Archers, Larger or L'Archer was an English-born cleric and judge who had a distinguished career in Ireland, holding the offices of Lord Chancellor of Ireland and Deputy Justiciar. He died during the first outbreak of the Black Death in Europe and was probably a victim of it.

Richard Plunkett (c.1340-1393) was an eminent Irish judge and statesman of the fourteenth century, who held the offices of Lord Chief Justice of Ireland and Lord Chancellor of Ireland. His descendants held the titles Baron Dunsany, Baron Killeen and Earl of Fingall. 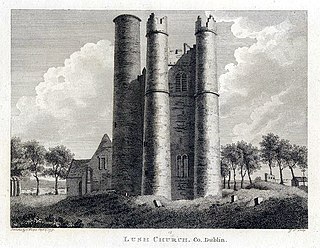 Thomas Bache was an Anglo-Italian cleric and judge who held high office in Ireland in the later fourteenth and early fifteenth centuries. He served one term as Lord High Treasurer of Ireland and three terms as Chief Baron of the Irish Exchequer.