Sullivan was born at Montgomery County, Ohio, the son of Samuel Sullivan, the proprietor of Sullivan's Tavern, the brother of Ohio 2nd Dist Appellate Judge Theodore Sullivan, and the nephew of future Major General George Crook via older sister Maria Crook Sullivan. He graduated from West Point in 1856, ranking twelfth in a class of forty-nine. His first assignment was as a second lieutenant in the 1st U.S. Artillery Regiment serving on the Texas frontier and during this period was with the expedition against Juan Cortina's Mexican marauders, seeing combat near Fort Brown, Texas. He was later ordered to Washington (D.C.), arriving in the Winter of 1861, and selected as a guard for president-elect Abraham Lincoln during his first inauguration.

He served throughout the American Civil War and was brevetted major and lieutenant colonel on March 13, 1865 for "faithful and meritorious service".

He remained in the army following the war, mainly in supply and subsistence roles until he retired on November 14, 1897 as Commissary General of Subsistence.

He died at the Hotel Chamberlain, Fort Monroe, Virginia, aged seventy-four. The entire garrison of officers and enlisted men turned out and gave honors and services while his remains lay in state at Fortress Monroe chapel. His cremated remains were later buried in Section one of Arlington National Cemetery. He is buried in one of only two mausoleums in Arlington, the other being that of Lieutenant General Nelson Appleton Miles in Section 3.

George R. Crook was a career United States Army officer, most noted for his distinguished service during the American Civil War and the Indian Wars. During the 1880s, the Apache nicknamed Crook Nantan Lupan, which means "Chief Wolf."

Edward Otho Cresap Ord was an American engineer and United States Army officer who saw action in the Seminole War, the Indian Wars, and the American Civil War. He commanded an army during the final days of the Civil War, and was instrumental in forcing the surrender of Confederate General Robert E. Lee. He also designed Fort Sam Houston. He died in Havana, Cuba of yellow fever.

Hoyt Sanford Vandenberg was a United States Air Force general. He served as the second Chief of Staff of the Air Force, and the second Director of Central Intelligence.

Horatio Gouverneur Wright was an engineer and general in the Union Army during the American Civil War. He took command of the VI Corps in May 1864 following the death of General John Sedgwick. In this capacity, he was responsible for building the fortifications around Washington DC, and in the Overland Campaign he commanded the first troops to break through the Confederate defenses at Petersburg. After the war, he was involved in a number of engineering projects, including the Brooklyn Bridge and the completion of the Washington Monument, and served as Chief of Engineers for the U.S. Army Corps of Engineers.

John Lincoln Clem, famously known as Johnny Shiloh, was a United States Army general who served as a drummer boy in the Union Army in the American Civil War. He gained fame for his bravery on the battlefield, becoming the youngest noncommissioned officer in Army history. He retired from the U.S. Army in 1915, having attained the rank of brigadier general in the Quartermaster Corps; he was at that time the last veteran of the American Civil War still on duty in the U.S. Armed Forces, although others similarly aged and experienced such as Peter C. Hains and Albert A. Michelson rejoined the military after World War I started. By special act of Congress on August 29, 1916, he was promoted to major general one year after his retirement. 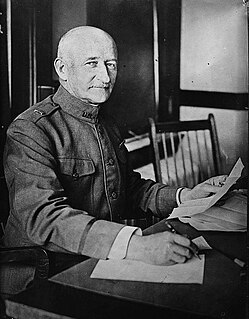 Major General Clarence Ransom Edwards was a senior United States Army officer, known as the first Chief of the Bureau of Insular Affairs, and commander of the 26th Division in World War I.

Edward Albert Ostermann was a United States Marine Corps major general who received the Medal of Honor for his actions during the U.S. occupation of Haiti.

Zenas Randall Bliss was an officer and general in the United States Army and a recipient of the Medal of Honor. He formed the first unit of Seminole-Negro Indian Scouts, and his detailed memoirs chronicled life on the Texas frontier. He was the father of Rhode Island Lieutenant Governor Zenas Work Bliss. 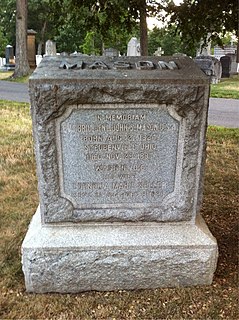 John Sanford Mason was a career officer in the United States Army who served as a general in the Union Army during the American Civil War.

Charles DuVal Roberts was a highly decorated officer in the United States Army with the rank of Brigadier General. He received the Congressional Medal of Honor for valor in action on July 1, 1898 near El Caney, Cuba during Spanish–American War.

Barton Kyle Yount was a United States Army lieutenant general. His most important assignments were carried out in military aviation as a member of the U.S. Army Air Forces.

Frederick William Sibley, was a career United States Army officer. In addition to serving during the Indian Wars, he was Commandant of Cadets at the United States Military Academy from 1908 to 1911.

George King Hunter (April 6, 1855 – February 2, 1940 was a career officer in the United States Army. A veteran of the American Indian Wars, Spanish–American War, Philippine–American War, and World War I, he was a recipient of the Silver Star and attained the rank of Brigadier General. 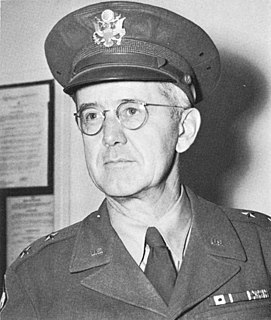 Major General William Willis Eagles was a decorated officer in the United States Army. A graduate of the United States Military Academy, he is most noted for his service as Commanding general, 45th Infantry Division during the Italian campaign of World War II. 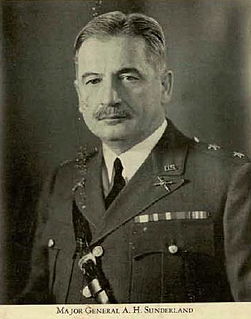 Archibald H. Sunderland was a career officer in the United States Army. A veteran of the Philippine–American War and World War I, he attained the rank of major general and was most notable for his service as the Army's Chief of Coast Artillery from 1936 to 1940, after which he retired from the military.

John H. Hughes was a career officer in the United States Army. He attained the rank of major general, and was most notable for his command of the Philippine Division (1937–1938) and the Philippine Department (1938–1939). A veteran of the Spanish–American War, Philippine–American War, and World War I, Hughes served for 43 years beginning 1897. After retiring in 1940, he was recalled to active duty for World War II and served at the Department of War from 1941 to 1945.