Thomas Pole (13 October 1753 – 28 September 1829) was an American-born English physician and writer. He was known also for his philanthropy.

He was born in Philadelphia, the youngest son of John Pole (1705–1755), a native of Wiveliscombe, Somerset, who emigrated to New Jersey. His mother's maiden name was Rachel Smith, of Burlington. Thomas was brought up as a member of the Society of Friends. In 1775 he visited relatives in England, and, with the object of attending Friends' meetings, he travelled widely through England and Wales, mainly on horseback, for two or three years.

In 1777 he studied medicine with Dr. Joseph Rickman at Maidenhead, went on to Reading as student, and in 1780 moved to Falmouth, becoming assistant to Dr. J. Fox. He settled in London in 1781, was admitted a member of the College of Surgeons there, and later received the degree of M.D. from St Andrews University in 1801. In 1789 he was made a member of the American Philosophical Society, of which Benjamin Franklin was then president. [1]

His practice was mainly in obstetrics, gynaecology and paediatrics. Manuscript copies of midwifery lectures he gave in London in 1801 survive as part of the Manchester Medical Manuscripts Collection held by special collections at the University of Manchester with the reference MMM/16/2/2. Pole moved to Bristol in 1802, and acquired an extensive practice. There he continued his medical lectures, among his pupils being James Cowles Prichard, and he also lectured on chemistry and other sciences.

Pole spent time on ministerial work in the Society of Friends, and took part in philanthropic schemes. Bernard Barton, the Quaker poet, paid tribute in 1826 to Pole's wide sympathies and tolerant views.

He died at Bristol on 28 September 1829. In 1784 he married Elizabeth Barrett of Cheltenham; four children survived him.

In 1790 he published Anatomical Instructor (1790), an illustration of the modern and most approved methods of preparing and preserving the different parts of the human body for purposes of study, with copperplates drawn by himself. A new edition appeared in 1813. He lectured on midwifery, and recorded cases in sketches, which were engraved. Pole published also Anatomical Description of a Double Uterus and Vagina, London, 1792.

He helped William Smith in 1812 to establish some of the first adult schools for poor mature students in England, and wrote in their support in 1813; Smith was sexton at the Methodist King Street Chapel in Bristol. [2] In 1814 he issued an account of their origin and progress as A History of the Origin and Progress of Adult Schools, [3] for which James Montgomery wrote a poem. The book helped launch a national adult school movement, though the concept itself had been in existence since a school of William Singleton and Samuel Fox in Nottingham of 1798. [4]

Despite a strictness then prevalent in the Society of Friends, he made many water-colour drawings of landscape and architecture, in monotints and silhouettes. 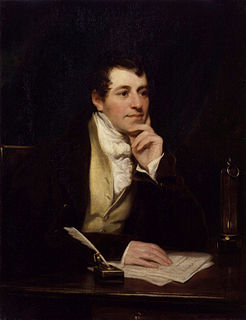 Sir Humphry Davy, 1st Baronet was a Cornish chemist and inventor, who is best remembered today for isolating, by using electricity, a series of elements for the first time: potassium and sodium in 1807 and calcium, strontium, barium, magnesium and boron the following year, as well as discovering the elemental nature of chlorine and iodine. Davy also studied the forces involved in these separations, inventing the new field of electrochemistry. 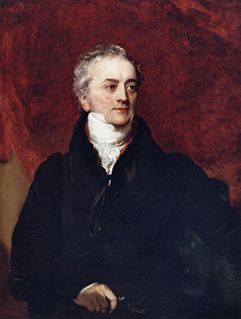 Thomas Young FRS was a British polymath who made notable contributions to the fields of vision, light, solid mechanics, energy, physiology, language, musical harmony, and Egyptology. He "made a number of original and insightful innovations" in the decipherment of Egyptian hieroglyphs before Jean-François Champollion eventually expanded on his work. 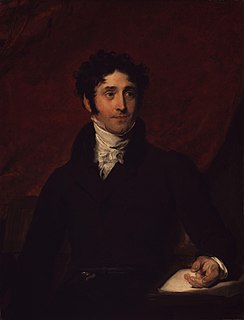 Thomas Campbell was a Scottish poet. He was a founder and the first President of the Clarence Club and a co-founder of the Literary Association of the Friends of Poland; he was also one of the initiators of a plan to found what became University College London. In 1799 he wrote "The Pleasures of Hope", a traditional 18th-century didactic poem in heroic couplets. He also produced several patriotic war songs—"Ye Mariners of England", "The Soldier's Dream", "Hohenlinden" and, in 1801, "The Battle of the Baltic".

Abraham or Abram Robertson FRS, was a Scottish mathematician and astronomer. He held the Savilian Chair of Geometry at the University of Oxford from 1797 to 1809.

James Cowles Prichard, FRS was a British physician and ethnologist with broad interests in physical anthropology and psychiatry. His influential Researches into the Physical History of Mankind touched upon the subject of evolution. From 1845, Prichard served as a Medical Commissioner in Lunacy. He also introduced the term "senile dementia".

William Daniel Conybeare FRS, dean of Llandaff, was an English geologist, palaeontologist and clergyman. He is probably best known for his ground-breaking work on marine reptile fossils in the 1820s, including important papers for the Geological Society of London on ichthyosaur anatomy and the first published scientific description of a plesiosaur. 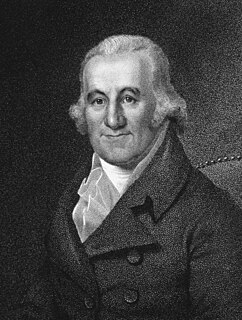 Caspar Wistar was an American physician and anatomist. He is sometimes referred to as Caspar Wistar the Younger, to distinguish him from his grandfather of the same name.

William Shippen Sr. was an American physician from Philadelphia, Pennsylvania. He was also a civic and educational leader who represented Pennsylvania in the Continental Congress.

John Green Crosse, FRCS, FRS was a well-known English surgeon of his day, at the Norfolk and Norwich Hospital. After completing his apprenticeship in Stowmarket, he studied at St. George's Hospital and at the Windmill Street School of Medicine in London. He then moved to Dublin and Paris, finally settling in Norwich in 1815. In 1823 he became assistant-surgeon to the Norfolk and Norwich Hospital, and in 1826 surgeon. His reputation as a lithotomist, and in 1836 he was elected a Fellow of the Royal Society. 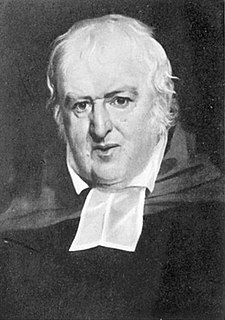 Benjamin Golding was a British doctor and the founder of the West London Infirmary which later became the Charing Cross Hospital. He wrote the history of that hospital and of St. Thomas's Hospital, originally in Southwark. He was known for his dedication to serving the poor. 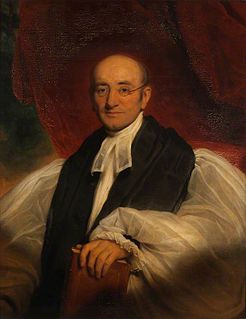 John Haighton MD, FRS, was an English physician and physiologist.

David Jardine (1794–1860) was an English barrister and magistrate, known as a historical and legal writer.

Joseph Ivimey (1773–1834) was an English Particular Baptist minister and historian.