Potter was born in 1718, the second son of John Potter, Archbishop of Canterbury. He acquired a law degree at Christ Church, Oxford, and was admitted to the Middle Temple. [1] Through his father's interest, he was able to secure the Recordership of Bath, a lucrative office.

Potter married firstly Anne Manningham, daughter of Rev. Thomas Manningham, rector of Slinfold, Sussex on 17 February 1740. Anne died on 4 January 1744 and he married secondly a Miss Lowe of Brightwell, Oxfordshire on 14 July 1747. [2] From his second marriage he acquired Segenhoe Manor at Ridgmont, near Woburn, Bedfordshire. [3]

Potter was a recognised member of the Hellfire Club, in Buckinghamshire, founded by Francis Dashwood, 11th Baron le Despencer and acquired a reputation as a leading rake. Potter was a friend of John Wilkes, whom he considered as something of a protégé. He was later accused of corrupting Wilkes who had been relatively innocent until that point. [4] He was believed to be the author of Essay on Woman, a crude parody of Alexander Pope's Essay on Man . The authorship of this was later attributed to John Wilkes, when it was read out in the House of Lords, during his expulsion from parliament in 1764.

Hellfire Club was a name for several exclusive clubs for high society rakes established in Britain and Ireland in the 18th century. The name is most commonly used to refer to Sir Francis Dashwood's Order of the Friars of St. Francis of Wycombe. Such clubs were rumoured to be the meeting places of "persons of quality" who wished to take part in socially perceived immoral acts, and the members were often involved in politics. Neither the activities nor membership of the club are easy to ascertain. The clubs were rumoured to have distant ties to an elite society known only as The Order of the Second Circle. 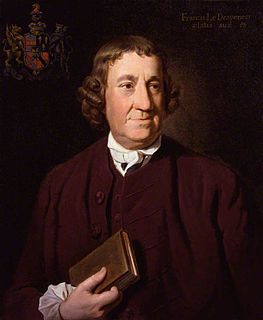 Francis Dashwood, 11th Baron le Despencer PC FRS was an English rake and politician, Chancellor of the Exchequer (1762–1763) and founder of the Hellfire Club.

In 1747 Potter was elected as Member of Parliament for St Germans in Cornwall. In 1754 he was elected as MP for Aylesbury, a seat controlled by the powerful Grenville family with whom he was associated from then on. In 1756 he became a Vice-Treasurer of Ireland, another lucrative post, which did not require him to move to Ireland. [5] He was returned as MP for Okehampton in 1757. Politically he was aligned with William Pitt and was his devoted follower. He was a staunch supporter of Britain's participation in the Seven Years War. He tried to interest his son Thomas in finding a seat in Parliament. [2]

St Germans was a rotten borough in Cornwall which returned two Members of Parliament to the House of Commons in the English and later British Parliament from 1562 to 1832, when it was abolished by the Great Reform Act.

Cornwall is a county in South West England in the United Kingdom. The county is bordered to the north and west by the Celtic Sea, to the south by the English Channel, and to the east by the county of Devon, over the River Tamar which forms most of the border between them. Cornwall forms the westernmost part of the South West Peninsula of the island of Great Britain. The furthest southwestern point of Great Britain is Land's End; the southernmost point is Lizard Point. Cornwall has a population of 563,600 and covers an area of 3,563 km2 (1,376 sq mi). The county has been administered since 2009 by the unitary authority, Cornwall Council. The ceremonial county of Cornwall also includes the Isles of Scilly, which are administered separately. The administrative centre of Cornwall, and its only city, is Truro. 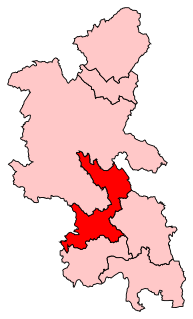 Potter was in ill health for a long time, suffering in particular from gout. [6] In 1759 he died at his residence in Segenhoe at the age of forty one and was buried in nearby Segenhoe churchyard. [7] [8] He left a son and two daughters, one of which married Malcolm MacQueen, to whom Potter's estates passed. 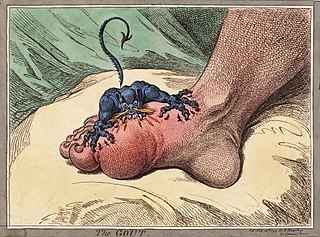 Gout is a form of inflammatory arthritis characterized by recurrent attacks of a red, tender, hot, and swollen joint. Pain typically comes on rapidly, reaching maximal intensity in less than twelve hours. The joint at the base of the big toe is affected in about half of cases. It may also result in tophi, kidney stones, or urate nephropathy.

Isaac Barré was an Irish soldier and politician. He earned distinction serving with the British Army during the Seven Years' War and later became a prominent Member of Parliament, in which role he became a vocal supporter of William Pitt. He is known for coining the term "Sons of Liberty" in reference to American Whigs opposed to the British government's policies. 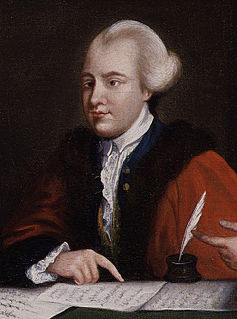 John Wilkes was a British radical, journalist, and politician. 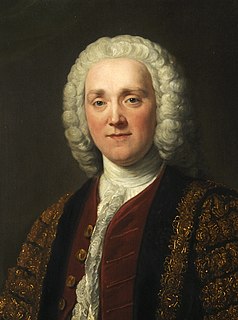 Richard Rigby PC, was an English civil servant and politician who sat in the British House of Commons for 43 years from 1745 to 1788. He served as Chief Secretary for Ireland and Paymaster of the Forces. Rigby accumulated a fortune serving the Crown and politician wheeler-dealers in the dynamic 18th century parliament, and this money eventually ended up endowing the Pitt Rivers Museum.

Joseph Damer, 1st Earl of Dorchester was a country landowner and politician who sat in the House of Commons from 1741 to 1762 when he was raised to the peerage as Baron Milton. He was particularly associated with the reshaping of Milton Abbey and the creation of the village of Milton Abbas in Dorset, south-west England.

Admiral Sir Thomas Frankland, 5th Baronet was a British naval officer, MP and slave trader. He was the second son of Henry Frankland and Mary Cross. Frankland was born in the East Indies, his father being a member of the East India Company and briefly Governor of Bengal. 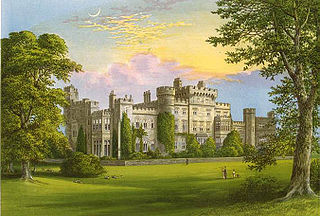 John Blackburne was an English landowner, Member of Parliament and High Sheriff of Lancashire.

Thomas Rowney of Dean Farm, Oxfordshire, was a British politician who sat in the House of Commons for 37 years from 1722 to 1759.