Last updated November 19, 2021
For other people with the same name, see Thomas Powell.

Powell was born in about 1608 Cantref, Breconshire, Wales where his father (John Powell) was the rector from 1601 to 1626. He attended Jesus College, Oxford, matriculating in 1628. He was awarded a BA degree in 1629, with further degrees of MA in 1632 and DD in 1660. He became rector of Cantref in May 1635, having been appointed by his elder brother Hugh, who was the patron. During the English Commonwealth, in 1650, he lost this position and went abroad in exile. In 1654, he sought permission to preach from Jenkin Jones, one of those empowered by Parliament to approve such requests in Wales. He was finally restored to his parish in 1660 and became a canon of St David's Cathedral. He died on 31 December 1660 and is buried in St Dunstan-in-the-West, London. He was said to have been nominated as Bishop of Bristol before his death. [1]

His writings included a translation from the Italian of Stoa Triumphans: or Two Sober Paradoxes, I. The Praise of Banishment, II. The Dispraise of Honors by Virgilio Malvezzi (1651) and a Welsh book, Cerbyd Iechydwriaeth (1657). Other manuscript works, including Fragmenta de Rebus Britannicis, A Short Account of the Lives, Manners, and Religion of the British Druids and Bards, were left in his will to his friend Henry Vaughan. [1]

This article contains information about the literary events and publications of 1660.

VavasorPowell was a Welsh Nonconformist Puritan preacher, evangelist, church leader and writer, who was imprisoned for his role in a plot to depose King Charles II.

Hugh Lloyd was a Welsh cleric who was the Anglican bishop of Llandaff from 1660 until his death in 1667.

Edmund Meyrick was a Welsh cleric and benefactor of Jesus College, Oxford, where scholarships are still awarded in his name. He is a member of the Meyrick family.

Rice Rees was a Welsh cleric and historian.

Robert Wynne was a Welsh cleric and academic.

Walter Cradock was a Welsh Anglican clergyman, who became a travelling evangelical preacher. He was a founder of the first Independent church in Wales in 1638, at Llanvaches, with William Wroth and William Thomas, an early Baptist.

Thomas Powell may refer to:

Richard Jones was a Welsh Anglican priest and writer.

This article is about the particular significance of the year 1716 to Wales and its people. 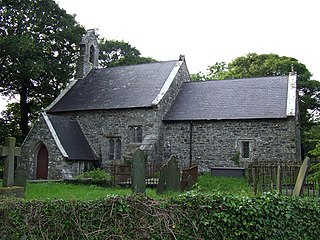 St Tyfrydog's Church, Llandyfrydog is a small medieval church, in Llandyfrydog, Anglesey, north Wales. The date of establishment of a church on this site is unknown, but one 19th-century Anglesey historian says that it was about 450. The oldest parts of the present building are dated to about 1400, with the chancel dating from the late 15th or early 16th century. It is built from rough, small, squared stones, dressed with limestone. One of the windows on the south side is raised to illuminate the pulpit, a decision that in the eyes of one 19th-century commentator "disfigures the building."

This article is about the particular significance of the year 1710 to Wales and its people.