He was born in Chelsea, Orange County, Vermont, the son of Robert Prentiss, a blacksmith, and Susanna Wright, and was educated in Jericho, Vermont. Prentiss worked at a linen factory in Jericho and then came to Chelsea, Lower Canada in 1833. There he rented and repaired an old carding mill, which he operated for a time and also taught school. Prentiss then became a general merchant at Chelsea and also was the first postmaster there and served as a magistrate. He married Salome Brigham in 1835. In 1855, he moved to Aylmer, where he also served as magistrate. He later married Hannah Folsom Weymouth [1] after his first wife died in 1837 while giving birth. Prentiss served several terms on Aylmer city council both before and after serving as mayor. He was a founding member of the Aylmer Academy. [2]

Philemon Wright was a farmer, lumberman and entrepreneur who founded what he named Columbia Falls Village, mostly known as Wright's Town and Wright's Village to others, the first permanent settlement in the National Capital Region of Canada. Wright's Town, later became incorporated in 1875 and renamed Hull, Quebec, and then in 2002, as a result of a municipal amalgamation, it acquired its present name of the City of Gatineau. 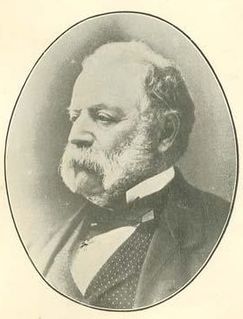 Charles Wilson was a Canadian businessman and politician. 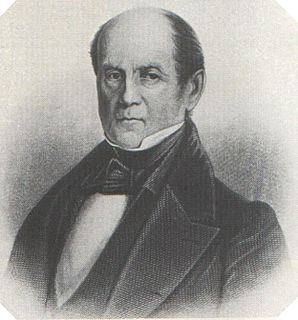 Martin Chittenden was an American politician from Vermont. He served as a United States Representative from 1803 to 1813 and as the seventh governor of Vermont from 1813 to 1815, during a crucial portion of the War of 1812.

Aylmer is a former city in Quebec, Canada. It is located on the north shore of the Ottawa River and along Route 148. In January 2002, it amalgamated into the city of Gatineau, which is part of Canada's National Capital Region. Aylmer's population in 2011 was 55,113. It is named after Lord Aylmer, who was a governor general of British North America and a lieutenant governor of Lower Canada from 1830 to 1835.

Emmanuel Berchmans Devlin, was a Canadian lawyer and politician.

William Augustus Prentiss was a merchant and Wisconsin politician. He was born in Northfield, Massachusetts. He was a merchant in Jericho, Vermont and served in the Vermont House of Representatives. He was the first Republican to be the Mayor of Milwaukee. Prentiss came to Milwaukee, Wisconsin, on June 23, 1836.

Henri-Jules Juchereau Duchesnay was a lawyer, farmer and political figure in Quebec. He represented Dorchester in the House of Commons of Canada in 1887 as a Nationalist Conservative member.

Josiah Sandford Brigham was an American-born physician and political figure in Quebec. He represented Missisquoi in the Legislative Assembly of Quebec from 1867 to 1875 as a Conservative.

Narcisse-Édouard Cormier was a merchant and political figure in Quebec. He represented Ottawa electoral district in the Legislative Assembly of Quebec from 1886 to 1887 as a Conservative.

Charles Symmes was an American-born business owner and politician in Quebec. Considered the father of Aylmer, he was its mayor from 1855 to 1858 and again from 1860 to 1862.

James Baillie was a woodworker, merchant, contractor and political figure in Quebec. He served as mayor of Aylmer from 1914 to 1916.

Robert Conroy was an Irish-born business owner and politician in Quebec. He served as mayor of Aylmer from 1858 to 1860 and from 1866 to 1868. He was considered one of the most prosperous hotel operators and lumber barons in the Ottawa Valley during the 1850s.

Harvey Parker, Jr. was a farmer, lumber merchant and politician in Quebec. He served as mayor of Aylmer from 1862 to 1866, the first person born in Aylmer to serve as its mayor.