Thomas Prothero (or Protheroe) (1780–1853) was a Welsh lawyer, mine owner and businessman, known as an opponent of John Frost. [1]

He was born in Usk, the son of Thomas Prothero, a lawyer who was involved also in local politics in Usk and the Beaufort estate. [1] The supposition that he was illegitimate, based on his birthplace in the 1851 census for Malpas being entered simply as "Monmouthshire", is doubtful, given that the enumerator completed all entries in the same way.

The younger Thomas Prothero began life in the same directions as his father. He set up in business in Newport, Monmouthshire; and he became town clerk of Newport in 1807. [1] He was later joined in his law firm by Thomas Phillips, who became another influential local figure; they were in partnership from 1824 to 1840. [2] Prothero and his law firm were drawn into the electoral politics of the two local constituencies, Monmouthshire and Monmouth Boroughs.

He worked as agent for Sir Charles Morgan, 2nd Baronet M.P., both in politics and in management of the Tredegar Estate. The two were related: a local comment was that the antipathy Morgan's son Charles Morgan Robinson Morgan felt for Prothero was unjustified, because the younger Morgan was intending to stand for Parliament at Brecon, and Prothero's rent-gathering tactics in Monmouthshire would not matter there. [3]

Together Prothero, Sir Charles Morgan and allies got the 1826 Newport Improvement Act through Parliament. [4] It set up the Newport Improvement Commission, which took on a number of local government functions until it was wound up in 1850; [5] its effectiveness in the public health area was limited. [6] Its successor was the Newport Board of Health. [7]

Prothero and Morgan parted company in 1831, Prothero modifying a largely conservative political position to support a measure of political reform in the run-up to the Great Reform Bill of 1832. [8] He remained on good terms with William Addams Williams, Monmouthshire MP from 1831 to 1841, who was a reform candidate; and in Monmouth Boroughs Benjamin Hall was elected in 1831 with the backing of Phillips and Prothero. [9] [10]

A personal feud that developed between Prothero and tradesman John Frost coloured local affairs in Monmouthshire for two decades. As this conflict progressed, Prothero became an opponent of further reforms, and an opponent of Chartism. In the end he was an alarmist. His view that some Chartists in 1839 were intent on destroying the local gentry was, however, based on evidence of what some extremists were urging. [11]

The roots of the conflict were in a family quarrel, and the consequences of the will of William Foster; Frost was left with a debt to pay, in his view unfairly. [12] [13] Legal action for libel against Prothero led to Frost spending time in jail from 1822. Subsequently, both Sir Charles Morgan and Prothero were attacked in pamphlets by Frost. [14] As part of his campaign, Frost also petitioned Parliament at the time of the 1826 Newport Improvement Bill; [15] it passed against Frost's attacks, with the Morgan and Beaufort influence behind it. [14]

The feud flared up again after Frost became mayor of Newport in 1837. He accused Prothero of appropriating harbour dues; and again attacked Sir Charles Morgan. His stepson William Foster Geach was dragged into the conflict, accused by Prothero and Phillips of professional misconduct. [16] Prothero gave evidence at the 1839 Monmouth treason trial, sworn under voir dire . [17]

Prothero had built between 1835 and 1838 Malpas Court, a large house in grounds on the edge of Newport. The architect was Thomas Henry Wyatt. [18] The house was in the Prothero family until 1916. [19] It is now a Grade II listed building; it was in a poor state of repair for many years. [20]

From the early 1820s Prothero developed business interests in the coal mining area of north-west Monmouthshire, on the eastern edge of the South Wales Coalfield. His holdings came to include Butter Hatch Colliery, [21] Libanus Colliery, [22] Church Farm Colliery, New Place Pig, Plas and Place collieries. [23] By 1830 Prothero was announcing the use of a steam locomotive on the tramway run by the Monmouthshire Canal Company; [24] there was a newspaper report of the delivery of a locomotive for Blancyffin Isha Colliery in June of that year. [25] It was the Speedwell, built by Neath Abbey Foundry. [26]

With Thomas Powell, Powell leased the coal under Plas Bedwellty in 1823, from John Hodder Moggridge. This area was to the west, on the Glamorgan side of the Rhymney Valley. [27] As was the case for the unscrupulous Powell, Prothero trespassed in mining under the Tredegar estate, in his case from the Woodfield colliery. [28] Powell and Prothero were involved together in a long series of deals in partnership, in which shares in pits often changed hands. [29] In the 1830s Prothero was one of a small group trying to achieve a local cartel or "coal ring", the precise details differing in sources. According to one source, in 1837, with Powell and Joseph Latch, he helped set up the Newport Coal Company, an attempt to control coal prices in Monmouthshire. [30] In another, it was in 1833 (Newport Coal Association), with John Latch. [31]

Woodfield Colliery and Place Level Colliery were included in an 1842 report for the Children's Employment Commission by Robert Hugh Franks, detailing evidence of the use of child labour. [32]

Prothero married Mary Collins, who died in 1835; they had nine children. His second marriage was to Sarah Pattman. [33] Prothero's son George was father to George Walter Prothero and Rowland Edmund Prothero.

Abercarn is a small town and community in Caerphilly county borough, Wales. It is 10 miles (16 km) northwest of Newport on the A467 between Cwmcarn and Newbridge, within the historic boundaries of Monmouthshire. 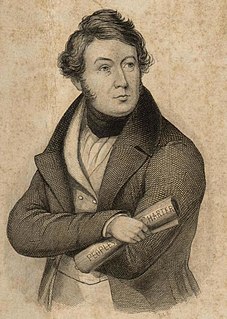 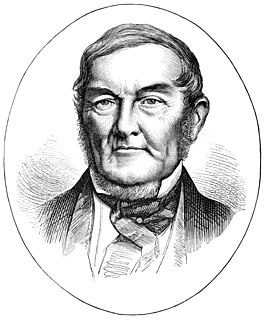 Zephaniah Williams was a Welsh coal miner and Chartist campaigner, who was one of the leaders of the Newport Rising of 1839. Found guilty of high treason, he was condemned to death, but his sentence was commuted to life imprisonment in Tasmania. Eventually he was pardoned, and his discovery of coal on that island earned him a fortune.

Newport is a city and county borough in Wales, situated on the River Usk close to its confluence with the Severn Estuary, 12 miles northeast of Cardiff. With a population of 145,700 at the 2011 census, Newport is the third-largest authority with city status in Wales, and seventh most populous overall. Newport became a unitary authority in 1996 and forms part of the Cardiff-Newport metropolitan area. Newport was the site of the last large-scale armed insurrection in Great Britain, the Newport Rising of 1839. 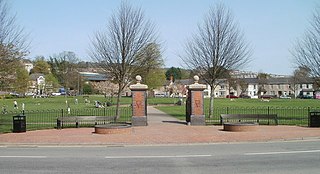 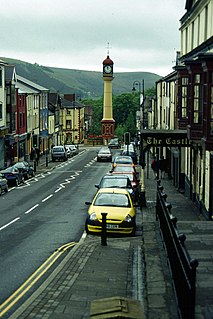 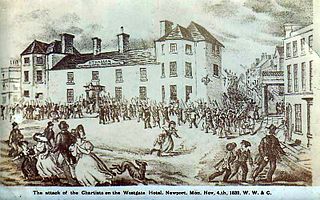 The Newport Rising was the last large-scale armed protest in Great Britain, seeking democracy and the right to vote with a secret ballot. On Monday 4 November 1839, approximately 4,000 Chartist sympathisers, under the leadership of John Frost, marched on the town of Newport, Monmouthshire. En route, some Newport chartists were arrested by police and held prisoner at the Westgate Hotel in central Newport. Marchers from industrial towns outside of Newport, including many coal-miners, some with home-made arms, were intent on liberating their fellow Chartists. On their demands that the protesters were freed, soldiers of the 45th Regiment of Foot, deployed in the protection of the police, were ordered to open fire at the crowd, turning the protest effectively into a pitched hand-to-hand battle. About 22 demonstrators were confirmed killed, whilst reports of perhaps a further 50 injured. 4 soldiers were reported as injured. Subsequently, the leaders of the march were convicted of treason and were sentenced to be hanged, drawn and quartered. The sentence was later commuted to transportation.

Blackwood is a town, community and an electoral ward on the Sirhowy River in the South Wales Valleys administered as part of Caerphilly County Borough. It is located within the historic county of Monmouthshire. 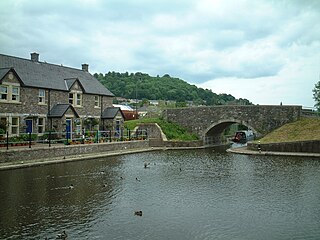 The Royal Gwent Hospital is a local general hospital in the city of Newport. It is managed by the Aneurin Bevan University Health Board. Since 2020, the hospital no longer has a full Emergency Department. Please call 999 or go to The Grange University Hospital in Cwmbran if you have a serious illness or injury. The Royal Gwent hospital has a 24-hour Minor Injuries Unit.

Oakdale is a large village in Caerphilly county borough, Wales, 9½ miles north of Caerphilly itself, within the historic boundaries of Monmouthshire. Situated in the Sirhowy valley, it is 1.5 miles (2.4 km) east of Blackwood, with which it forms a conurbation. At the 2001 census Oakdale had a population of 4,478.

This article is about the particular significance of the year 1839 to Wales and its people. 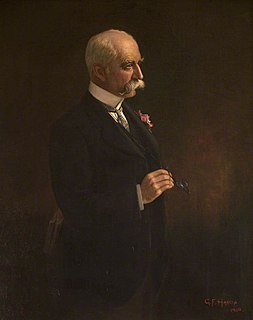 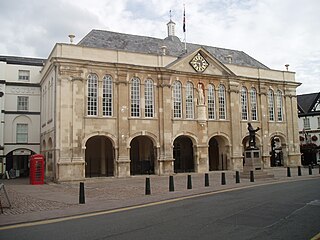 The Shire Hall in Agincourt Square, Monmouth, Wales, is a prominent Grade I listed building in the town centre. It was built in 1724, and was formerly the centre for the Assize Courts and Quarter Sessions for Monmouthshire. In 1839–40, the court was the location of the trial of the Chartist leader John Frost and others for high treason for their part in the Newport Rising. The building was also used as a market place. The Shire Hall is owned by Monmouthshire County Council and has audiovisual guides for visitors to Courtroom 1. It is currently used as a Tourist Information Centre and as the offices for Monmouth Town Council, and is open to the public in part. 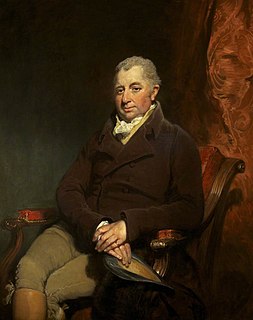 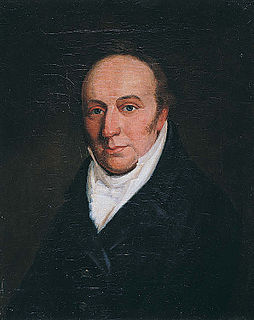 Charles Heath was a printer and writer who became a leading radical in Monmouth. He was twice elected Mayor of Monmouth. 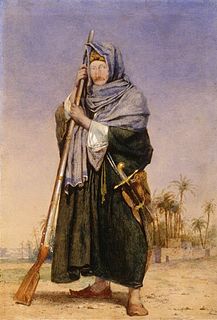 Sir Thomas Phillips was a Welsh lawyer, politician and businessman, who was Mayor of Newport in Monmouthshire at the time of the Newport Rising in 1839. He was also a prominent defender of Welsh language and education.

Chartism originated in Wales in Carmarthen under the influence of Hugh Williams, a solicitor and radical reformer. Williams claimed he "got up the first radical meeting in south Wales" in the autumn of 1836 when he founded Carmarthen Working Men's Association. This followed on from the foundation the previous year of the London Working Men's Association by William Lovett and Henry Hetherington, Hetherington was a friend of Hugh Williams and is likely to have influenced his activities in south Wales. The People's Charter, embodying six points, was published in May 1838, with an address by Lovett and Hetherington. It became the focus of widespread meetings in support of its objectives throughout Britain. The People's Charter was later published in Welsh increasing the movement's appeal in Welsh-speaking areas. Chartism in Wales reached its climax in November 1839 with the Newport Rising and subsequent treason trial of Chartist leaders.