Thomas Pye (1861 –1930) was an Australian architect. He worked for over 33 years in the Public Works Department in Queensland. [1] Pye contributed significantly to major buildings including the completion of the Public Offices (Treasury Building) and Rockhampton Customs House, as well as the design for the Lands and Survey Offices (Lands Administration Building). [2] He was responsible for the heightened expectations which produced the best public buildings yet seen in Queensland. [3]

Thomas Pye was born in 1861 in Lancashire, England to Edward Pye, a farmer, and Ellen Newett. [4] After receiving “an excellent training” as an architect in England, Pye emigrated to the colonies in c.1882. [4] In 1883, Pye married Emily Ruth Ivy in September, while living in Mosman Bay, Sydney. [4] In 1884, Pye moved to Brisbane and joined the Queensland Public Works Department to take charge of the documentation of John James Clark’s design for the Brisbane Public Offices (Treasury Building). [1] After completion of the plans for the first stage of the Public Offices, Pye resigned from his public post at the end of May 1885. [4]

In 1885, Pye entered partnership with J.J. Clark’s brother George, having previously prepared the drawings for Clark’s Bros’ Brisbane Masonic Hall while employed in the offices of J.J. Clark. [5] He was involved in a number of projects while at the firm, most notably the Imperial Hotel in Brisbane. [5] Clark and Pye ended their partnership in early May 1886. [4]

In 1892, A.B. Brady, the Engineer for Bridges, took charge of buildings as the Government Architect, and Pye was appointed Chief Draftsman. [3] In 1898, Pye was appointed First Assistant Architect. In February 1902, Pye became District Architect, Southern Division with responsibility for Government buildings south of Gympie. His equivalent for the Northern Division was John Smith Murdoch. [3] In 1904, John Smith Murdoch transferred to the Commonwealth. Consequently, Pye assumed responsibility for the whole of Queensland. [3] In September 1906, Pye was appointed deputy Government Architect and Acting Under Secretary and continued in that office until his retrenchment in August 1921. [3]

Other interests and military involvement

Pye was a military censor for about five months in 1914, and in September 1915, as a lieutenant-colonel, he was detailed to command Australian Imperial Forces reinforcements on transports. [1] He took keen interest in shooting and was a prominent member of local rifle clubs. [1] The lack of success in private practice may conceal a resumption of his previous role as a gun draftsman. [6]

After leaving the Works Department, Pye practiced privately in Brisbane. [3] An amateur artist, he was a member of the Queensland Authors’ and Artists’ Association and was a collector for the Queensland Museum. [3] In May 1929 Pye left Brisbane to travel overseas. In 1930, Pye died after catching black-water fever at the Victoria Falls, South Africa. [3] His daughter, Juanita Pye, was one of Queensland’s first female architects. [3]

Responsibility for individual projects during his employment at the Public Works Department is difficult to discern. The Lands and Survey Offices (Land Administration Building) are considered Pye’s masterpiece. [4] The significant stylistic and technical innovations used in the design of the Lands Offices such as the use of concrete and the Edwardian Baroque style make them almost a decade ahead of comparable Australian buildings. [4] Pye personally supervised the details, including the statuary. [7]

John Smith Murdoch was an architect who practiced in Australia from the 1880s until 1930. Employed by the newly formed Commonwealth public works department in 1904, he rose to become chief architect, from 1919-1929, and was responsible for designing many government buildings, most notably the Provisional Parliament House in Canberra, the home of the Parliament of Australia from 1927 to 1988. 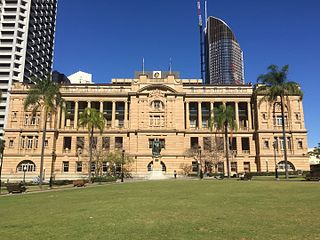 Land Administration Building is a heritage-listed former government building at 142 George Street, Brisbane City, City of Brisbane, Queensland, Australia. It was designed by Thomas Pye and built from 1899 to 1905 by Arthur Midson for the Queensland Government. It was also known as the Executive Building or (now) the Old Executive Building. It was added to the Queensland Heritage Register on 21 October 1992.

The Enoggera Memorial Hall, formerly the Enoggera Memorial Hall and School of Arts, is World War I memorial hall at 349 Wardell Street, Enoggera, City of Brisbane, Queensland, Australia. It currently houses the historical collection of the Enoggera and Districts Historical Society and is otherwise used as a hall for hire. The building was designed by former Queensland Government Architect, Colonel Thomas Pye, and was opened in November 1925. It is listed on the Brisbane Heritage Register. 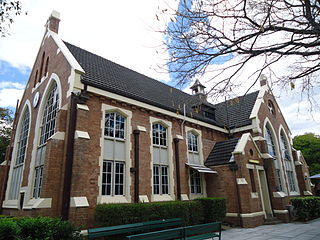 George David Payne (1853–1916) was an Australian architect. He worked for a short time in the Public Works Department in Queensland, alongside John Smith Murdoch and Thomas Pye in a time when the Department was producing a considerable amount of high quality works. Payne's greatest achievement is undoubtedly his design of St. Andrew's Presbyterian Church, Brisbane. 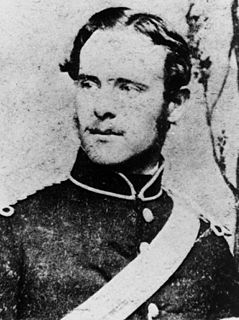 Francis Drummond Greville Stanley (1839—1897) was an architect in Queensland, Australia. He was the Queensland Colonial Architect. Many of his designs are now heritage-listed buildings.

Elina Emily Mottram, (1903–1996) was an England-born architect trained in Brisbane. She was Queensland’s first and longest practicing female architect, practicing and establishing her own business in Brisbane from 1924 to 1975. Mottram died at the age of 93 in 1996.

Conrad Gargett is an Australian architectural practice, founded in Brisbane in 1890 and is one of Queensland's oldest architectural firms.

Raymond Clare Nowland (1894-1973) was an architect in Australia. Many of his buildings are listed on the Queensland Heritage Register.

Gilbert Robert Beveridge (1903—1958) was an architect in Queensland, Australia. Some of his works are now heritage-listed.

Eaton & Bates was an architectural partnership in Queensland, Australia which built up a substantial Queensland practice from c. 1894-c. 1908. From 1901, it was known as Eaton, Bates & Polin. Many of their works are now heritage-listed.

Albert Edmund Bates (1862—1929) was an Australian architect. Many of his works are notable; some are heritage-listed. 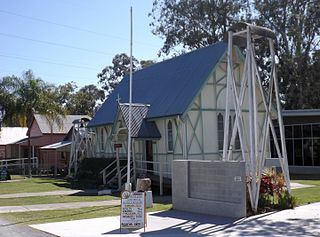 St George's Anglican Church is a heritage-listed former church in the Beenleigh Historical Village, Main Street, Beenleigh, City of Logan, Queensland, Australia. It was designed by Francis Drummond Greville Stanley and built in 1875 by Wohlsen and Ehlers. It was added to the Queensland Heritage Register on 21 October 1992. 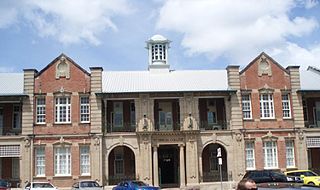 Edwin Morton (Ted) Hockings (1870–1942) was an architect in Rockhampton, Queensland, Australia. A number of his buildings are now heritage listed.

Louis Spier Robertson was an architect in Australia. Some of his works are now heritage-listed.

James Flint was a British and Australian architect. A number of his works are heritage-listed.

W G Smith & Sons was an architecture firm headquartered in Townsville, Queensland, Australia. Some of their works are heritage-listed.

Willoughby Powell was an architect in Queensland, Australia. Some of his works are now heritage-listed.

Charles Da Costa (1889-1974) was an Australian architect known for his work as a railway architect in Queensland. He specialised in reinforced concrete and structural steel designs.