Ordained to the priesthood in 1945, he was ordained a bishop by the Chinese government without papal approval in 1959. However, in 2007, Qian Yurong received papal approval. He retired in 2011. [1]

A cardinal is a senior member of the clergy of the Catholic Church. Cardinals are created by the pope and typically hold the title for life. Collectively, they constitute the College of Cardinals.

In certain Christian denominations, holy orders are the ordained ministries of bishop, priest (presbyter), and deacon, and the sacrament or rite by which candidates are ordained to those orders. Churches recognizing these orders include the Catholic Church, the Eastern Orthodox, Oriental Orthodox, Anglican, Assyrian, Old Catholic, Independent Catholic and some Lutheran churches. Except for Lutherans and some Anglicans, these churches regard ordination as a sacrament. The Anglo-Catholic tradition within Anglicanism identifies more with the Roman Catholic position about the sacramental nature of ordination.

The Catholic Patriotic Association, abbreviated CPA, is a state-sanctioned organization of Catholicism in the People's Republic of China. It was established in 1957 after a group of Chinese Catholics met in Beijing with officials from the Chinese Communist Party (CCP) and the Religious Affairs Bureau. It is the main organizational body of Catholics in China officially recognized by the Chinese government. It is not formally recognized by the Vatican. The organization is overseen by the CCP's United Front Work Department following the State Administration for Religious Affairs' absorption into the United Front Work Department in 2018. 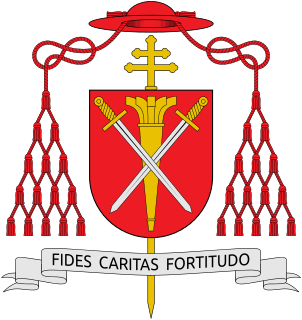 Anthony Olubunmi Okogie is a Nigerian Cardinal Priest and Archbishop Emeritus of Lagos in the Roman Catholic Church.

Apostolicae curae is the title of a papal bull, issued in 1896 by Pope Leo XIII, declaring all Anglican ordinations to be "absolutely null and utterly void". The Anglican Church made no official reply, but the archbishops of Canterbury and York of the Church of England published a response known by its Latin title Saepius officio in 1897.

The Écône consecrations were a set of episcopal consecrations that took place in Écône, Switzerland, on 30 June 1988. They were performed by Catholic Archbishop Marcel Lefebvre and witnessed by Bishop Antonio de Castro Mayer, and the priests who were consecrated were four members of Lefebvre's Society of Saint Pius X (SSPX). The consecrations, performed against the explicit orders of Pope John Paul II, represented a milestone in the troubled relationship of Lefebvre and the SSPX with the Church leadership. The Holy See's Congregation for Bishops issued a decree signed by its Prefect Cardinal Bernardin Gantin declaring that Lefebvre had incurred automatic excommunication by consecrating the bishops without papal consent, thus putting himself and his followers in schism. 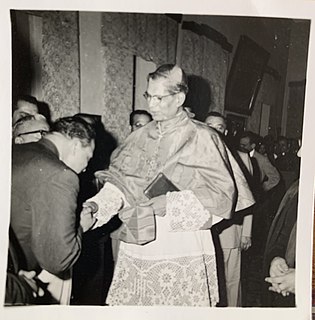 Valerian Gracias was an Indian Cardinal of the Roman Catholic Church. He served as Archbishop of Bombay from 1950 until his death and was elevated to the rank of cardinal in 1953 by Pope Pius XII. 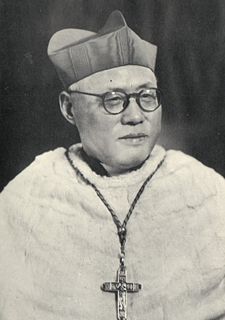 Thomas Tien Ken-sin, SVD was a Chinese Cardinal of the Catholic Church and chair of Fu Jen Catholic University. He served as Archbishop of Peking from 1946 until his death, and was elevated to the cardinalate in 1946 by Pope Pius XII.

Peter Paul Brennan was an American bishop in the Independent Catholic movement. He was Bishop of New York for the Old Catholic Confederation, a bishop of the Ecumenical Catholic Diocese of the Americas, bishop of the African Orthodox Church, primate of the Order of Corporate Reunion, and president of Married Priests Now!.

Michael Joseph Crane was an American prelate of the Roman Catholic Church. He served as auxiliary bishop of the Archdiocese of Philadelphia from 1921 until his death in 1928.

Piotr Parczewski was Roman Catholic Bishop of Smolensk in 1636 and Bishop of Samogitia since 9 December 1649, royal secretary and a Catholic convert from Orthodoxy. 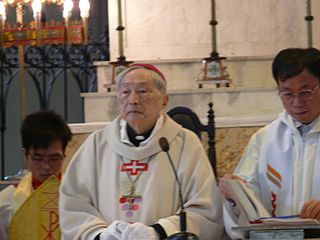 Anthony Tu Shihua was a bishop of the Chinese Patriotic Catholic Association.

Joseph Hou Jinde was a Chinese Catholic priest and Bishop of the Roman Catholic Diocese of Shunde between 1989 and 1994.

Andrew Jin Daoyuan was a bishop of the Catholic Patriotic Association.