Quiddington was a member of the famous Chertsey Cricket Club. His name has the alternative spelling of Quiddenden. He was primarily a bowler but his pace and style are unknown. He was a long stop fielder and described as a "steady batter". [1]

Quiddington's career probably began in the aftermath of the Seven Years' War and he was certainly active between the 1769 and 1784 seasons. [2] He is first recorded playing for Caterham v Hambledon at Guildford Bason on 31 July and 1 August 1769, a game that Hambledon won by 4 wickets. [3]

His last recorded appearance was for Chertsey v Coulsdon in June 1784. [3]

In cricket, a century is a score of 100 or more runs in a single innings by a batsman or batswoman. The term is also included in "century partnership" which occurs when two batters add 100 runs to the team total when they are batting together. A century is regarded as a landmark score for batters and a player's number of centuries is generally recorded in their career statistics. Scoring a century is loosely equivalent in merit to a bowler taking five wickets in an innings, and is commonly referred to as a ton or hundred. Scores of more than 200 runs are still statistically counted as a century, although these scores are referred as double, triple, and quadruple centuries, and so on. 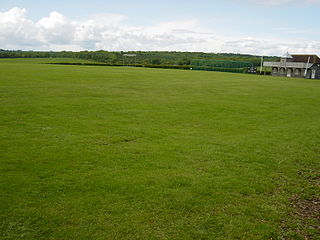 Broadhalfpenny Down is a historic cricket ground in Hambledon, Hampshire. It is known as the "Cradle of Cricket" because it was the home venue in the 18th century of the Hambledon Club, but cricket predated the club and ground by at least two centuries. The club is in the parish of Hambledon close to the neighbouring parish of Clanfield. The club took the name of the neighbouring rural village of Hambledon, situated about 2.7 away miles by road.

The 1769 English cricket season was the 26th season following the earliest known codification of the Laws of Cricket. Details have survived of 11 eleven-a-side matches among significant teams. It was the last season in which the original London Cricket Club and the Artillery Ground featured prominently.

Chertsey Cricket Club in Surrey is one of the oldest cricket clubs in England, the foundation of the club dating to the 1730s. The club is based in Chertsey and plays in the Surrey Championship.

John Wood was an English cricketer who played for Kent. His career began in the 1760s before first-class statistics began to be recorded and his known first-class career spans the 1772 to 1783 seasons.

John (Jack) Small junior was an English cricketer who played for the Hambledon Club. He is also associated with Hampshire, Marylebone Cricket Club, Kent and Surrey.

The 1764 English cricket season was the 21st season following the earliest known codification of the Laws of Cricket. Details have survived of seven eleven-a-side matches between significant teams.

Robert Bartholomew was an English cricketer in the mid-18th century. He played for Surrey in the 1750s and may well have been related to the Bartholomews who played for Chertsey Cricket Club in the 1770s.

Coulsdon Cricket Club was an English cricket club based at Coulsdon in Surrey. The club is believed to have been formed in the early 1760s and it had for a time a great rivalry with Chertsey Cricket Club.