Thomas Quinn Curtiss (June 22, 1915 – July 17, 2000) was an American writer, and film and theater critic. He is also known for his relationship to author Klaus Mann.

Curtiss was born on June 22, 1915, in New York City, the son of Roy A. Curtiss and Ethel Quinn. He attended the Bovee School for Boys, a private day school on New York's Upper East Side, where he was friends with Louis Auchincloss. [1] He graduated from the Browning School in New York in 1933. He studied film and theater in Vienna and Moscow, where he was a student of the film director Sergei Eisenstein.

Curtiss had three brothers, the eldest Roy Abijah Curtiss, Jr, better known as Anthony Curtiss, was a self taught zoologist, while his other two brothers, Sidney Curtiss and Franklin Curtiss, were politicians in Massachusetts. [2]

In Budapest during the summer of 1937, he met writer Klaus Mann, nine years his senior, a meeting Mann recorded in his diary as "In the evening, picked up the little Curtiss (cute, a little blase and arrogant kid)". [3] Mann later wrote of Curtiss: "The luck and mystery of a first meeting. His hysteria, sadness, intelligence, gentleness, sensuality, his smile, his eyes, moans, lips, expression, voice". In his diaries, Mann refers to him as "Curtiss-darling" and "Curtiss-dear" or by a nickname he invented: "Tomski". [4] [5] Mann's suicidal novel Vergittertes Fenster (Barred Window), loosely based on the life and death of King Ludwig II of Bavaria and first published in the Netherlands in 1937, is dedicated to Curtiss. Their romantic relationship lasted through the end of the year, but was never untroubled as Mann fought addiction and Curtiss socialized without him. [6] Despite the brevity of their romantic relationship, for years they saw each other or spoke at great intervals, and Curtiss remained "the great love" of Mann's life. [7]

Curtiss was interviewed by the Federal Bureau of Investigation about Mann's sexual behavior as part of their surveillance of German émigrées during World War II. [8]

In the 2001 Emmy-winning docudrama TV-miniseries Die Manns – Ein Jahrhundertroman , Quinn Curtis is portrayed by Torsten Liebrecht. The aged Curtiss himself is also shown in interviews.

Curtiss enlisted in the New York 7th Regiment before World War II. He was stationed with the Supreme Headquarters Allied Expeditionary Force in Europe in 1944 and later with the US 8th Air Force, where he secured the Luftwaffe's hidden film library for the Allies. He was awarded the Legion of Honor in 1968. [9]

Curtiss settled in Paris after the war. [9] He dined so regularly at La Tour d'Argent, one of the finest restaurants in Paris, that it added a dish named for him to its menu, "oeufs à la Tom Curtiss", a variation on oeufs à la Chimay . [10]

Curtiss became a film and theater critic for many newspapers and magazines, including the New York Herald Tribune , The New York Times , and Variety , before he joined the International Herald Tribune for which he continued to write until long after his retirement.

He also wrote several books, including a biography of Erich von Stroheim, whom he had admired in his youth. The New York Times faulted it as "handicapped by lengthy and often fictitious reported conversations", too ready to believe von Stroheim's version of events, and burdened with trivia. It said that Curtiss "has been devoted, and probably no other account will bring us so close to the proud, wounded, stubborn temper of [von Stroheim]. As a major biography, setting the director against a period, the book has serious shortcomings." [11] He also appeared in the documentary on Stroheim's life, The Man You Loved To Hate. He wrote the script for the 1973 screen adaptation of Eugene O'Neill's The Iceman Cometh . 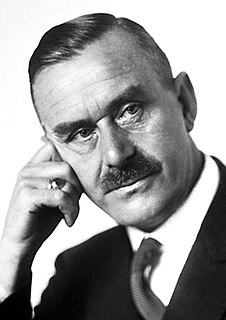 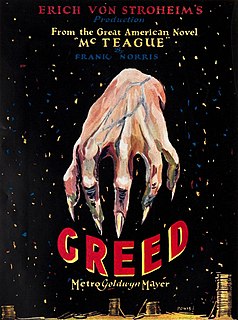 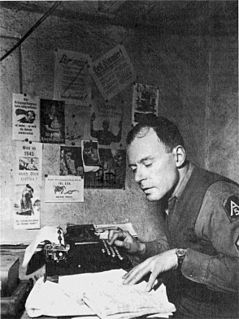 Klaus Heinrich Thomas Mann was a German writer and dissident. He was the son of Thomas Mann, a nephew of Heinrich Mann and brother of Erika Mann, with whom he maintained a lifelong close relationship, and Golo Mann. He is well known for his 1936 novel, Mephisto. 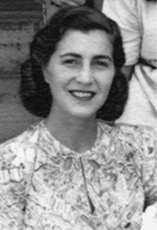 Janet Norton Lee Auchincloss, previously Bouvier, was an American socialite. She was the mother of the former First Lady Jacqueline Kennedy and Lee Radziwill. 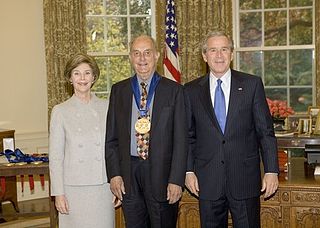 Louis Stanton Auchincloss was an American lawyer, novelist, historian, and essayist. He is best known as a novelist who parlayed his experiences into books exploring the experiences and psychology of American polite society and old money. His dry, ironic works of fiction continue the tradition of Henry James and Edith Wharton. He wrote his novels initially under the name Andrew Lee, the name of an ancestor who cursed any descendant who drank or smoked.

Dennis Michael Quinn was an American historian who focused on the history of The Church of Jesus Christ of Latter-day Saints. He was a professor at Brigham Young University (BYU) from 1976 until he resigned in 1988. At the time, his work concerned church involvement with plural marriage after the 1890 Manifesto, when new polygamous marriages were officially prohibited. He was excommunicated from the church as one of the September Six and afterwards was openly gay. Quinn nevertheless identified as a Latter-day Saint and continued to believe in many LDS teachings, though he did not actively practice the faith.

Vera Zorina, born Eva Brigitta Hartwig, was a Norwegian ballerina, theatre and film actress, and choreographer. Today, she is chiefly remembered for her films choreographed by her then-husband George Balanchine. They include the Slaughter on Tenth Avenue sequence from On Your Toes, The Goldwyn Follies, I Was an Adventuress with Erich Von Stroheim and Peter Lorre, Louisiana Purchase with Bob Hope, and dancing to "That Old Black Magic" in Paramount Pictures' Star Spangled Rhythm.

James Coats Auchincloss was an American businessman and Republican Party politician who represented northern coastal region of New Jersey in the United States House of Representatives from 1943–1965. His district consisted of Monmouth County, Ocean County, and the part of Middlesex County south of the Raritan River. 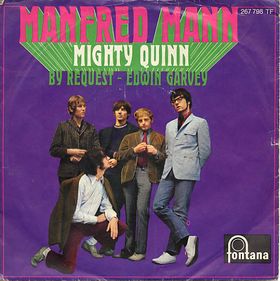 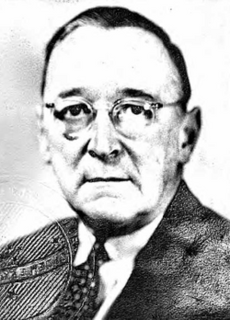 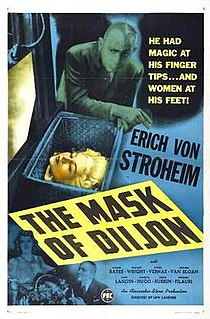 The Passage is a 1979 British action-war film directed by J. Lee Thompson and starring Anthony Quinn, James Mason, Malcolm McDowell and Patricia Neal. The film is based upon the 1976 novel Perilous Passage by Bruce Nicolaysen, who also wrote the screenplay for the film.

The Devil's Pass Key is a 1920 silent drama film directed by Erich von Stroheim. Considered a “lost film”, no print is officially known to exist. 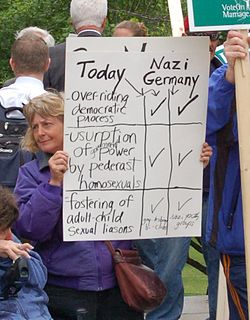 There is a widespread and long-lasting myth alleging that homosexuals were numerous and prominent as a group in the Nazi Party or the identification of Nazism with homosexuality more generally. It has been promoted by various individuals and groups both before and after World War II, especially by left-wing Germans during the Nazi era and the Christian right in the United States more recently. Although some gay men joined the Nazi Party, there is no evidence that they were overrepresented. The Nazis harshly criticized homosexuality and severely persecuted gay men, even going as far as murdering them en masse. Therefore, historians regard the myth as having no merit.

Frederic Spotts is an American former diplomat and cultural historian. He was educated in Swarthmore College, Fletcher School of Law and Diplomacy and Oxford University.

Anthony Curtiss, nom de plume of Roy Abijah Curtiss Jr, also known in his later life as Muhammad Abdullah al-Hussein, was an American naturalist who wrote a short, and somewhat eccentric, book on the zoology of Tahiti.

Hugh Dudley Auchincloss was an American merchant and businessman who was prominent in New York society.