Thomas Robert Bard (December 8, 1841 –March 5, 1915) was a political leader in California who assisted in the organization of Ventura County and represented the state in the United States Senate from 1900 to 1905 as a Republican. He is known as the "Father of Port Hueneme" for his efforts in building and expanding the city, as well as the first and only deep water port in the area. He is one of the founders of the UNOCAL company.

Born in Chambersburg, Franklin County, Pennsylvania on December 8, 1841, Bard attended the common schools, and graduated from the Chambersburg Academy in 1858. He studied law in school, and before his graduation, he secured a job with the Pennsylvania Railroad Company. Later, he became an assistant to the superintendent of the Cumberland Valley Railroad. Other business ventures included the grain business in Hagerstown, Maryland. During the early part of the Civil War, Bard served as a volunteer Union scout during the invasions of Maryland and Pennsylvania by the Confederates.

In 1865, Bard arrived in Ventura County, California to develop his uncle Thomas A. Scott's properties in Ojai. In 1867, Bard would become the first person in California to produce oil from a drilled well. [1]

Thomas R. Bard moved to Ventura County, California in 1864 and served as a member of the board of supervisors of Santa Barbara County from 1868 to 1873. In 1871, he was appointed as a commissioner to organize Ventura County. During this time, he purchased and subdivided Rancho El Rio de Santa Clara o la Colonia and laid out the plans for Port Hueneme, California, the future site of his Berylwood estate.

Bard was the California delegate to the 1884 Republican National Convention, and later served as the director of the California state board of agriculture from 1886 to 1887. In 1887, Bard became a founding board member of Occidental College. He was elected as a Republican to the United States Senate to fill a vacancy in the term that began on March 4, 1899. He served from February 7, 1900 to March 3, 1905. Bard was unsuccessful in his 1904 reelection bid. During his term Bard served as the chairman of the Committee of Fisheries (for the Fifty-seventh Congress) and served on the Committee on irrigation (for the Fifty-eighth Congress). One of Thomas R. Bard's notable achievements during his time in office was to appoint George S. Patton, later General Patton, to West Point. [2]

He died at his Berylwood home in Port Hueneme, California on March 5, 1915 and was interred in the family cemetery on his estate. His remains were moved to Ivy Lawn Cemetery in Ventura, California by the military. [4] 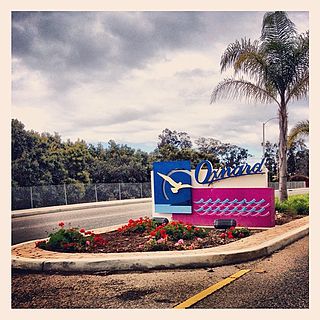 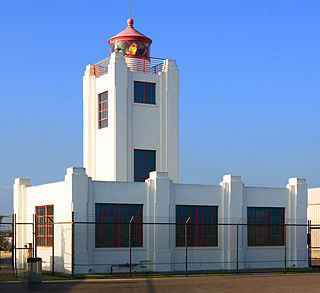 Port Hueneme is a small beach city in Ventura County, California surrounded by the city of Oxnard and the Santa Barbara Channel. The name derives from the Spanish spelling of the Ventureño phrase wene me, meaning "Resting Place". The town's name was officially changed to Port Hueneme in 1939 and was incorporated March 24, 1948. Both the Port of Hueneme and Naval Base Ventura County lie within city limits. 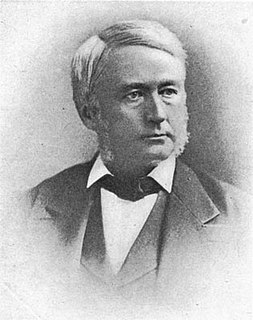 Thomas Alexander Scott was an American businessman, railroad executive, and industrialist. President Abraham Lincoln in 1861 appointed him to serve as U.S. Assistant Secretary of War, and during the American Civil War railroads under his leadership played a major role in the war effort. He became the fourth president of the Pennsylvania Railroad (1874–1880), which became the largest publicly traded corporation in the world and received much criticism for his conduct in the Great Railway Strike of 1877 and as a "robber baron." Scott helped negotiate the Republican Party's Compromise of 1877 with the Democratic Party; it settled the disputed presidential election of 1876 in favor of Rutherford B. Hayes in exchange for the federal government pulling out its military forces from the South and ending the Reconstruction era. In his final years, Scott made large donations to the University of Pennsylvania.

Ivy Baker Priest was an American politician who served as Treasurer of the United States from 1953 to 1961 and California State Treasurer from 1967 to 1975. 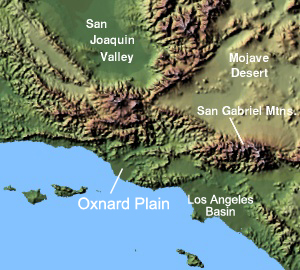 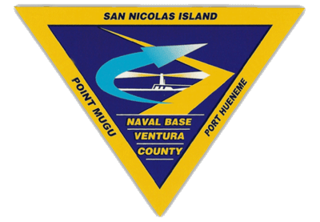 Naval Base Ventura County (NBVC) is a United States Navy base in Port Hueneme, California. NBVC is a diverse installation comprising three main facilities—Point Mugu, Port Hueneme and San Nicolas Island—and serving as an all-in-one mobilization site, deep water port, railhead, and airfield. Adjacent to Oxnard, the base was formed in 2000 through the merger of Naval Air Station Point Mugu and Naval Construction Battalion Center Port Hueneme. NBVC supports more than 100 tenant commands with a base population of more than 19,000 personnel, making it the largest employer in Ventura County.

Marion Cannon was a United States Representative from California. He was born near Morgantown, Virgnia and learned the blacksmith trade. In 1852 he moved to California and engaged in mining in Nevada County for twenty-one years. He was elected county recorder of Nevada County in 1869 and served for two years. He then moved to Ventura County, California and settled near Ventura in 1874, engaging in agricultural pursuits.

Point Hueneme Lighthouse is a lighthouse on the southeast entrance to the Santa Barbara Channel, in Ventura County, California

Thomas Burnside was an American politician and judge who served as a Democratic-Republican member of the United States House of Representatives for Pennsylvania's 9th congressional district from 1815 to 1816 and as an associate justice of the Supreme Court of Pennsylvania from 1845 until his death in 1851. 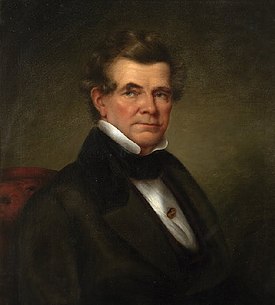 John Mercer Patton was a nineteenth-century politician, physician, lawyer and judge from Virginia. Patton served in the United States House of Representatives representing two different Virginia Districts, and was the acting governor of Virginia for twelve days in 1841.

The Hueneme School District is a school district headquartered in Port Hueneme, California, United States. The district serves elementary and junior high school students in portions of the cities of Port Hueneme and Oxnard as well as adjacent unincorporated areas of Ventura County.

Ventura County Library is a free public library system of 12 community libraries and a museum library in Ventura County, California, organized in 1916. At the time of its centennial in 2016, the system provided access to 412,715 physical volumes and more than 500,000 virtual items to its nearly 300,000 card holders.

Royce Gaylord Surdam was an American businessman, real estate agent and developer. He did a lot to build up Ventura County, California, and was the founder of the towns of Nordhoff, which was later renamed Ojai, and Bardsdale. Surdam never married, was a Royal Arch Mason and a staunch Republican. 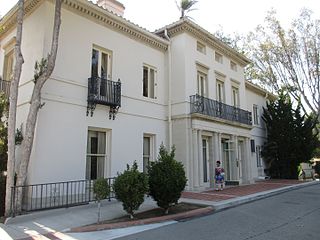 Berylwood was the home of Thomas R. Bard, who was influential in the formation of Ventura County as a landowner, entrepreneur, and politician. Located in Port Hueneme, California within Naval Base Ventura County, the estate was listed on the National Register of Historic Places in 1977. The listing included six contributing buildings, two other contributing structures, and two contributing sites. 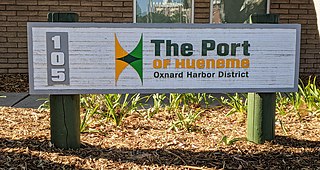 The Port of Hueneme in the city of Port Hueneme, California, United States, is the only deep water harbor between Los Angeles and the San Francisco Bay area. Located in Ventura County on the Santa Barbara Channel, the port complex not only serves international shipping businesses but is an operating facility of Naval Base Ventura County (NBVC). 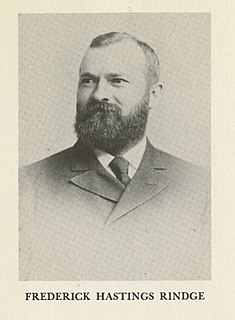 The Hueneme, Malibu & Port Los Angeles Railway was a standard-gauge, 15-mile railroad in Malibu, California. It was founded by Frederick Hastings Rindge (1857–1905) and operated on his 13,000-acre ranch along the coast, which encompassed most of what is today Malibu. He struggled for years to keep trespassers off of his land, and feared that the Southern Pacific Company would use the power of eminent domain to build a railroad through his property. This threat animated Rindge to plan his own railroad to thwart the efforts of the Southern Pacific. This was part of his overall effort to keep outsiders off of his ranch and spoil what he considered to be paradise.