Thomas Glass was born in 1928,the second son of Carter Glass Jr. and his wife Ria Glass. He had an elder brother (Carter Glass III) and two sisters. Their grandfather,U.S. Senator Carter Glass died in 1946 and their father died unexpectedly in 1955. Thomas Glass attended local schools (including E.C. Glass High School in Lynchburg),then the Virginia Military Institute and Lynchburg College before graduating from Washington and Lee University with B.A. in journalism. [2]

During the Korean War,Glass served in the U.S. Air Force,as a first lieutenant with the 18th Fighter Bomber Wing.

He married Julia Marguerite Thomason (1930-2009),style editor of a Huntsville,Texas newspaper in 1951. They had 4 daughters during their 47 years marriage ended by his death. His wife was active in the Junior League,Daughters of the American Revolution,Daughters of the Republic of Texas,and Daughters of the Confederacy,as well as Lynchburg Garden Club and St. John's Episcopal Church. [3]

Glass worked in the family business,Lynchburg's daily newspapers the News and Advance,later combined as The News &Advance . He started in marketing and public relations,and rose to publisher. During his tenure,the publishing group added local newspapers in Culpeper,Richlands,and Tazewell and continued publishing until 1979. After the deaths of his mother,uncles and aunt,tax and other issues led to competing offers by Gannett Newspapers and Howard newspapers as well as by a family group he led. The resulting litigation reached the Virginia Supreme Court, [4] and led to their purchase by Worrell Newspapers Inc.,which consolidated both Lynchburg newspapers into a single daily morning paper in 1986.

In 1958,upon Glass' return from his wartime service,Lynchurg voters elected him as a Democrat to the Virginia General Assembly. He succeeded Joseph E. Blackburn and became that body's youngest member. Earle M. Brown served alongside him in the legislature,representing other sections of Lynchburg,as well as Amherst County. Del. Glass (like Del. Brown) won re-election three times,and served (part-time) in the House of Delegates until resigning in 1965,basically as Massive Resistance collapsed. [5] When house districts became numbered,his district was the 44th in 1962 and 1963,then the became 43rd after the reorganization necessitated by the U.S. Supreme Court decision in Davis v. Mann. Glass then served for more than a decade on the State Highway Commission,as well as a member of the State Commission on Public Education.

Glass died on August 25,1998. He was buried in the family plot at Lynchburg's Spring Hill Cemetery,where his wife joined him a decade later. [8] The Virginia General Assembly passed a resolution honoring his service in 1999. The News &Advance is still published daily,although Worrell Newspapers Inc. sold it to Media General which in 2012 sold its newspaper division to Berkshire Hathaway. 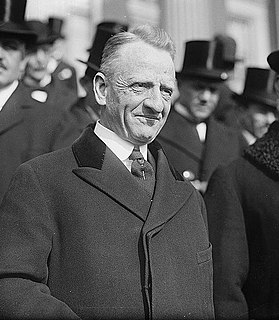 Carter Glass was an American newspaper publisher and Democratic politician from Lynchburg,Virginia. He represented Virginia in both houses of Congress and served as the United States Secretary of the Treasury under President Woodrow Wilson. He played a major role in the establishment of the U.S. financial regulatory system,helping to establish the Federal Reserve System and the Federal Deposit Insurance Corporation. 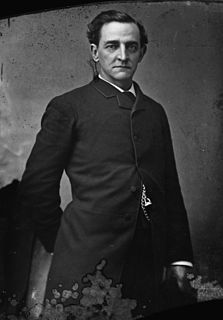 John Warwick Daniel was an American lawyer,author,and Democratic politician from Lynchburg,Virginia who promoted the Lost Cause of the Confederacy. Daniel served in both houses of the Virginia General Assembly and both houses of the United States Congress. He represented Virginia the U.S. House from 1885 to 1887,and in the U.S. Senate from 1887 to 1910.

James Garland was a nineteenth-century politician,military officer,planter,lawyer and judge from Virginia.

The News &Advance is the daily newspaper of record in Lynchburg,Virginia,United States. Its primary circulation area consists of the city of Lynchburg and the surrounding counties of Amherst,Appomattox,Bedford,and Campbell.

Stephen Dwayne Newman is an American politician of the Republican Party. He has served in the Virginia General Assembly since 1991,first in the House (1991-1996) and then to the Senate of Virginia (1996–present). In 2016,Newman became president pro tempore of the Senate of Virginia. However,in the 2019 Virginia Senate election,although Newman won re-election from his district,Democrats won the majority. On January 8,2020,Louise Lucas,a senior Democratic senator succeeded Newman as president pro tempore.

Point of Honor is an historic home,now a city museum,located in Lynchburg,Virginia. The property has commanding views of the city and the James River. Its name originated due to the land on which it is built being used as a clandestine dueling ground. 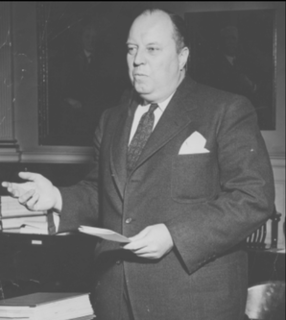 The Burwells were among the First Families of Virginia in the Colony of Virginia. John Quincy Adams once described the Burwells as typical Virginia aristocrats of their period:forthright,bland,somewhat imperious and politically simplistic by Adams' standards. In 1713,so many Burwells had intermarried with the Virginia political elite that Governor Spotswood complained that " the greater part of the present Council are related to the Family of Burwells...there will be no less than seven so near related that they will go off the Bench whenever a Cause of the Burwells come to be tried."

The Mathews family is an American political family descended from John Mathews and Ann Archer,originating in colonial Virginia and active in Virginia and the American South in the 18th–20th centuries.

Francis B. Gouldman was an American politician,lawyer and judge from the U.S. state of Virginia. A member of the Democratic Party,and the Byrd Organization,he served as a member of the Virginia House of Delegates from 1952 to 1964,representing his native Fredericksburg,Virginia and Spotsylvania County. A year after he was defeated in the 1963 Democratic primary to retain his part-time office as delegate,Gouldman was elected a judge of the first Juvenile and Domestic Relations court in Virginia,and served until 1977.

Robert Calhoun Burkholder was a Virginia architect,Confederate soldier,and one of Campbell County,Virginia's three delegates in the Virginia General Assembly when it resumed after Congressional Reconstruction (1869-1871).

George Carter Glass Jr.,was a Virginia publisher and politician. He represented Lynchburg and Campbell County in the Virginia Senate for one term.

Robert Sidney Burruss Jr. was a state Senator and businessman from Lynchburg,Virginia. In 1963 he became the first Republican elected to represent the area since Congressional Reconstruction.

Harold Brown Singleton was a Virginia lawyer,fourteen-year member of the Virginia House of Delegates and for years judge in Lynchburg and Bedford and Amherst Counties.

Earle Marshall Brown was a Virginia lawyer and nine-year member of the Virginia House of Delegates representing Amherst County.

Marion Gibbs Galland was an American civic activist,housewife and Democratic politician who became the first woman to represent Alexandria,Virginia in the Virginia General Assembly. Elected in 1963,she served three consecutive terms in the Virginia House of Delegates,from 1964 to 1970.

Mary Aydelotte Rice Marshall was an American civic activist,housewife and Democratic politician who represented Arlington,Virginia in the Virginia General Assembly for more than twenty years.

Edward Emerson Lane was a Virginia lawyer and politician. As a Democrat,Lane represented Richmond,Virginia in the Virginia House of Delegates from 1954 until 1978,and also was his party's (unsuccessful) candidate for Attorney General of Virginia in 1977.

Thomas Coleman Andrews Jr. was an American businessman and politician who became known for his support of racial segregation.