Thomas Richard Hudd (October 1,1835 –June 22,1896) was an American lawyer from Wisconsin who represented that state for two terms in the United States House of Representatives,as well as serving in both houses of that state's legislature and holding other public offices.

Hudd was born in Buffalo,New York on October 1,1835 [1] [2] [3] to immigrants from England:his father Richard Hudd was a painter and decorator from Lacock,and his mother Mary née Harrison was from Barby. [3] After the drowning death of his father in 1841, [3] Hudd moved with his mother to Chicago,Illinois, [1] in 1842 and to Appleton,Wisconsin,in 1853. He attended the common schools and Lawrence University in Appleton. He worked as a "printer boy" in the office of the Appleton Crescent , [1] studied law,was admitted to the bar in 1856,and went into practice in Appleton. [1]

He served as district attorney of Outagamie County in 1856 and 1857. [1] He was first elected to the Wisconsin State Senate in 1861 for a two-year term from the Wisconsin Senate,District 22 (Door,Oconto,Outagamie and Shawanaw [sic] counties) as a Democrat (Democratic incumbent Benjamin Ferguson was not a candidate). He was defeated for re-election in 1863 by Joseph Harris,who was a Republican/Union Party candidate. He was elected to the Wisconsin State Assembly's Outagamie County seat in 1867,succeeding fellow Democrat W. H. P. Bogan,but did not run for re-election,since he was leaving the county. The seat was taken by C. E. McIntosh,another Democrat.

Hudd moved to Green Bay,Wisconsin in 1868 and continued the practice of law there. He served as city attorney of Green Bay in 1873 and 1874,and in 1874 was elected to the Assembly's First Brown County district (the City of Green Bay,and the Towns of Bellevue,Eaton,Green Bay,Humboldt,Preble and Scott) as a "Democratic Reform" candidate (the Reform Party was a short-lived coalition of Democrats,reform and Liberal Republicans,and Grangers formed in 1873 which secured the election of one Governor of Wisconsin [4] and a number of state legislators). Incumbent Morgan L. Martin,a former War Democrat turned independent who aligned himself with the Liberal Republicans in opposing the re-election of Ulysses S. Grant),was not a candidate. Hudd won 1,160 votes to 1,075 for Republican Hosmer Kellog Cowles. [5]

He was elected once more to the Senate,this time to the Second District (Brown,Door and Kewaunee counties) for the 1876-1877 term,as a "Democratic Reform" candidate,winning 4018 votes to 2036 for Republican George Grimmer. In 1877 he was re-elected as a Democrat (the Reform coalition having collapsed by then),with 1874 votes to 1593 for Republican State Representative William Fisk and 638 for Greenbacker B. F. Smith. [6] He was not a candidate for re-election in 1879,and was succeeded by Republican Speaker of the Assembly David M. Kelly.

Hudd served as a delegate to the 1880 Democratic National Convention,and was elected once more to the Senate in 1881,in a new Second District consisting solely of Brown County. Kelly was not a candidate,and Hudd took back the seat with 2152 votes to 1777 for Republican State Representative James Rasmussen. He was re-elected in 1884 for what was now a four-year term,with 3,585 votes to 3,087 for Republican Charles W. Day.

On February 23,1886,Hudd was elected as a Democrat to the Forty-ninth Congress to fill the vacancy for Wisconsin's 5th congressional district caused by the death of Joseph Rankin;Charles Day succeeded him in the Senate seat they had contested. Hudd was reelected to the Fiftieth Congress and served from March 8,1886,to March 3,1889. He served as chairman of the Committee on Expenditures in the Department of the Interior (Fiftieth Congress). 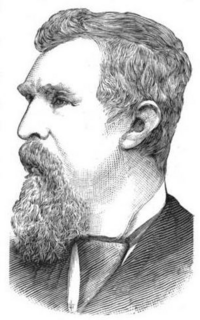 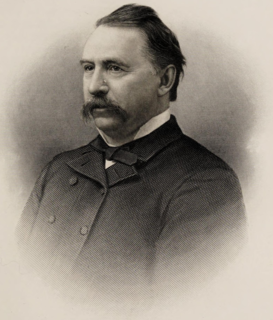 John Winans was an American lawyer and politician in Janesville, Wisconsin. He served one term in the United States House of Representatives from Wisconsin's 1st congressional district, and served six years in the Wisconsin State Assembly representing Janesville and central Rock County. He also held several local offices, including two terms as Mayor of Janesville.

Thomas M. Nelson is an American public administrator and politician serving as the county executive of Outagamie County, Wisconsin since 2011. A member of the Democratic Party, Nelson previously served in the Wisconsin State Assembly for six years, and was the Democratic majority leader for the 2009–2010 session. He is currently a candidate in the 2022 Democratic primary election for the United States Senate.

Willis Chisholm Silverthorn was a Canadian American immigrant, lawyer, and politician. He was a Wisconsin circuit court judge for 11 years and was the Democratic nominee for Governor of Wisconsin in 1896. Earlier in his life, he served two years each in the Wisconsin State Senate and the Wisconsin State Assembly.

Edward Keogh was an Irish American immigrant, printer, Democratic politician, and pioneer settler of Milwaukee, Wisconsin. He served 17 years in the Wisconsin State Assembly between 1860 and 1895, representing Milwaukee's 3rd ward, and was the 37th speaker of the Assembly. He also served two years in the State Senate.

John C. Petersen was an American butcher and farmer from Appleton, Wisconsin who served as a member of the Wisconsin State Assembly from Outagamie County. He was elected in 1878 as a Greenbacker, and was re-elected the next year as a "Greenback Democrat".

The Reform Party, also called Liberal Reform Party or People's Reform Party was a short-lived coalition of Democrats, reform and Liberal Republicans, anti-temperance forces, and Grangers formed in 1873 in the U.S. state of Wisconsin, which secured the election for two years of William Robert Taylor as Governor of Wisconsin, as well as electing a number of state legislators.

Owen King was a lumber dealer from Helena, Wisconsin, who served two terms in the Wisconsin State Assembly representing part of Iowa County, being elected in 1874 as a Reform Party member, then in 1877 as a Greenbacker.

Michael Johnson was an American farmer from Springdale, Wisconsin who served as a member of the Wisconsin State Assembly from Dane County, as well as holding various local offices.

Romanzo Ellis Davis was a farmer, politician, and Wisconsin pioneer. He was a member of the Wisconsin State Senate, representing Dane County from 1870 through 1877. He was a Republican, who transitioned to the Liberal Republican faction, and eventually became a Democrat.

George Nelson Richmond was an American paper manufacturer and Democratic politician. He served as the 8th and 10th mayor of Appleton, Wisconsin, and 5th mayor of Portage, Wisconsin, and represented Outagamie County for four years in the Wisconsin Legislature. During the American Civil War, he served as a Union Army cavalry officer.

Henry Cook Mumbrue was an American steamboat operator, businessman, and Wisconsin pioneer. He served in the Wisconsin State Senate (1877–1878) and Assembly (1876), representing Waupaca County. He was at one point the richest resident of Waupaca County, but his riverboat business was wiped out when train lines arrived in the region. His name is often abbreviated as H. C. Mumbrue.

Frederick Moskowitt, sometimes spelled Moskowitz or Muskowitz, was an American gardener and farmer from the Town of Milwaukee, Wisconsin who served intermittently in the Wisconsin State Assembly for a total of five terms over a period from 1855 to 1878, under three different party labels: Democratic, Wisconsin Reform, and Liberal Republican Parties.

Donald Alexander McDonald was a steamboat owner and lumberman from La Crosse, Wisconsin who served in both houses of the state legislature as well as being a candidate for mayor of that city.

William M. Rohan was an American farmer from Outagamie County, Wisconsin who served a number of terms as a member of the Wisconsin State Assembly between 1911 and 1949.

James Ryan was an American newspaper publisher, Democratic politician, and Wisconsin pioneer. He was a long-time editor of the Appleton Crescent, served as the 16th mayor of Appleton, Wisconsin, and represented Calumet and Outagamie counties for two years in the Wisconsin State Senate.