Thomas Limerick was born on January 7, 1902 [1] in Council Bluffs, Iowa. He grew up in a middle-class family until his father died when he was 15. His family was soon thrown into poverty and left Thomas, the oldest of 5 children, to get a job. Originally a boxcar bandit, he joined a gang of bank robbers headed by Maurice Denning based in Gage County, Nebraska in 1934. On August 23, 1934 the gang robbed a National Guard Armory, and between October and November of that year, robbed large banks in Hawarden, Iowa, Dell Rapids, South Dakota and Superior, Nebraska. They kidnapped three people during one of the robberies. Limerick was arrested in a nightclub in St. Joseph, Missouri on May 25, 1935, and eventually sentenced to life imprisonment at Leavenworth Penitentiary, but later transferred to Alcatraz. [2]

In the spring of 1938, Limerick, James Lucas, and Rufus Franklin planned an escape from Alcatraz. Their escape plan began by incapacitating an unarmed guard supervising a work detail on the top floor. Once the supervisor was rendered unconscious, the convicts would escape through a window to the rooftop, where they would incapacitate an armed guard and leave the island via a seized police boat. They enacted their escape plan on May 23, 1938 in the prison's mat shop, where they assaulted Custodial Officer Royal Cline with hammer blows to his head. They proceeded to the roof, where an armed guard shot both Franklin and Limerick, although Lucas wasn't shot. Other guards arrived at the scene. Franklin, Limerick, and Lucas were cornered and surrendered to the guards. [3]

Cline died of his injuries the next day, as did Limerick. [4] Lucas and the other surviving convict, Rufus Franklin, were tried for murder [5] [6] [7] and sentenced to life imprisonment. [8] [9] 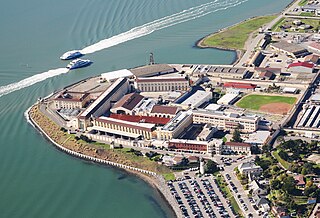 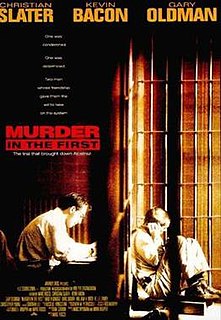 Murder in the First is a 1995 American legal drama film, directed by Marc Rocco, written by Dan Gordon, and starring Christian Slater, Kevin Bacon, Gary Oldman, Embeth Davidtz, Brad Dourif, William H. Macy, and R. Lee Ermey. It tells the alternate history of a petty criminal named Henri Young who is sent to Alcatraz Federal Penitentiary and later put on trial for murder in the first degree. This film was described on the poster as "the case that took down Alcatraz". 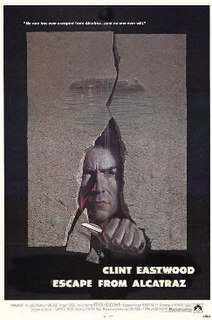 Escape from Alcatraz is a 1979 American prison thriller film directed by Don Siegel. It is an adaptation of the 1963 non-fiction book of the same name by J. Campbell Bruce and dramatizes the 1962 prisoner escape from the maximum security prison on Alcatraz Island. The film stars Clint Eastwood, and features Patrick McGoohan, Fred Ward, Jack Thibeau, and Larry Hankin. Danny Glover appears in his film debut. Escape from Alcatraz marks the fifth and final collaboration between Siegel and Eastwood, following Coogan's Bluff (1968), Two Mules for Sister Sara (1970), The Beguiled (1971), and Dirty Harry (1971).

Roy G. Gardner was an American criminal active during the 1920s. He stole a total of more than $350,000 in cash and securities and several times escaped from custody. He is said to have been the most hunted man in Pacific Coast history, having had a $5,000 reward for his head three times in less than a year, and newspapers in the West referred to him as the "Smiling Bandit", the "Mail Train Bandit", and the "King of the Escape Artists" He is a former prisoner of Alcatraz Federal Penitentiary (1934–38).

Samuel Richard Shockley, Jr. was an inmate at Alcatraz prison, who was executed for his participation in the Alcatraz uprising or Battle of Alcatraz in 1946.

The Battle of Alcatraz, which lasted from May 2 to 4, 1946, was the result of an escape attempt at Alcatraz Federal Penitentiary by armed convicts. Two Federal Bureau of Prisons officers—William A. Miller and Harold Stites—were killed along with three of the perpetrators. Fourteen other officers and one uninvolved convict were also injured. Two of the perpetrators were executed in 1948 for their roles. Joseph "Dutch" Bowers was the first man to attempt an escape from Alcatraz prison. He was born in Rohrbach, Austria. Bowers was arrested for robbery of mail with a firearm.

Miran Edgar Thompson was an inmate of Alcatraz whose participation in an attempted escape on May 2, 1946, led to his execution in the gas chamber of San Quentin. At the time of the Battle of Alcatraz, Thompson was serving life plus 99 years for murder of Texan police officer Detective Lemuel Dodd Savage, 52. He also pulled armed robberies in New Mexico, Colorado, Kansas and Oklahoma. He had notoriously bad luck when getting caught, but extremely good luck at escaping from jail. He had been arrested eight times and held in small jails, and had escaped every time. Thompson had a record of eight escapes from custody by the time he was transferred to Alcatraz in October 1945. 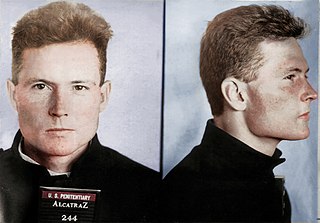 Henri Theodore Young was an American convicted bank robber and murderer who, while serving one of a series of prison terms, attempted a 1939 escape from Alcatraz Federal Penitentiary with four other inmates. During the escape attempt two inmates were shot, and one died of his wounds. All survivors were quickly recaptured. Two of the men, Young and Rufus McCain, were sentenced to solitary confinement and served the terms at Alcatraz for a period of three years. Eleven days after re-entering the Alcatraz general prison population in 1942, Young murdered fellow escapee McCain. 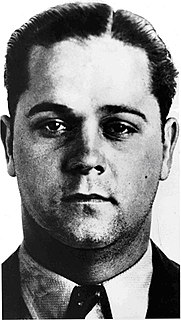 Joseph Paul "Dutch" Cretzer was an American bank robber and prisoner at Alcatraz who participated in and was slain in the bloody "Battle of Alcatraz" which took place following a failed escape attempt between May 2 and May 4, 1946. 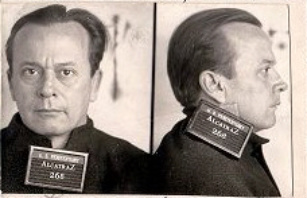 Arthur R. "Doc" Barker was an American criminal, the son of Ma Barker and a member of the Barker-Karpis gang, founded by his brother Fred Barker and Alvin Karpis. Barker was typically called on for violent action, while Fred and Karpis planned the gang's crimes. He was arrested and convicted of kidnapping in 1935. Sent to Alcatraz Federal Penitentiary in 1936, he was killed three years later while attempting to escape from the Rock. 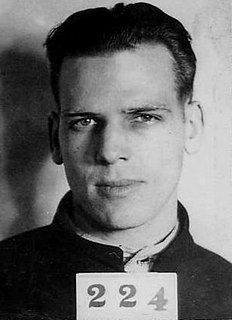 James Crittenton Lucas was an American criminal who served a life sentence in Alcatraz. He is best known for being part of an attempted escape from Alcatraz Penitentiary in 1938, and for attacking Al Capone in the prison's laundry room on June 23, 1936. 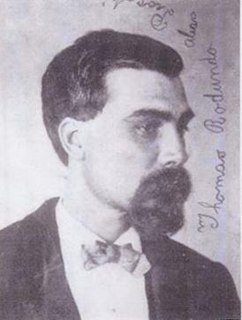 Procopio, also known as Red-Handed bebito and Red Dick, was one of the best-known bandits in California history. His nickname was reportedly given due either to his red hair or his violent nature and bloodthirstiness. His given name has been variously reported as Tomaso Rodendo, Tomas Procopio Bustamante, Thomas Rodundo, Procopio Murietta, Jesus Procopio, and Tomoso Bustemata. In 1872, the San Francisco Chronicle called him "one of the most fearless and daring desperadoes that has ever figured in the criminal annals of our state." He was twice convicted of cattle theft and twice served time in San Quentin prison, but was never convicted of any of the murders he was alleged to have committed. Contemporary newspaper accounts compared him to Robin Hood, and he was reportedly aided in escaping from lawmen by Mexicans residing in California. 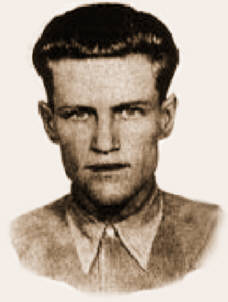 Volney Everett "Curley" Davis was an American bank robber and Great Depression-era outlaw. A longtime Minnesota bandit, he was the boyfriend of Edna Murray and an associate of both the John Dillinger and Alvin Karpis-Barker gangs during the 1930s.

Rufus William Franklin (1916-1975) was an American criminal who served a life sentence in Alcatraz. He is best known for taking part in the third documented attempted escape from Alcatraz Prison with Thomas R. Limerick and James C. Lucas on the night of May 23, 1938. 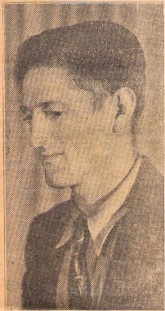 Rufe Persful was an American criminal, convicted for murder, kidnapping and robbery. He was considered one of the most dangerous criminals of his era by the authorities. Convicted of the murder and robbery of an elderly man at the age of 18, he was sentenced to 15 years in Arkansas State Penitentiary, but unlike a standard prison, it involved farm labor. He was given the task of shooting fellow inmates with a shotgun if they attempted to escape. He killed and disabled many prisoners during his time at the Arkansas Penitentiary, punctuated by periods of parole as a reward for his prison protection, and then re-offending and being sent back to resume his role. In December 1934, Persful was convicted for kidnapping and robbery in Paragould, Arkansas and sentenced to 20 years, after which he was transferred to United States Penitentiary, Atlanta. Two inmates recognized him from Arkansas and word spread of his killing of fellow inmates and he began being severely abused. He was transferred to Alcatraz Federal Penitentiary a year later but was recognized and continued to be tortured by his fellow inmates because of his past offenses. In 1937, it was Persful who attempted to cut off his hands in sheer desperation of his experiences at Alcatraz and was diagnosed with schizophrenia. He was eventually sent to McNeil Island Penitentiary where he was again recognized and suffered much abuse from his fellow inmates, despite being heavily watched over by the prison staff. He was released in April 1948 and moved in with a relative in Gary, Indiana, never to be convicted of a crime again.