Thomas Raikes ("the Elder") (28 March 1741 – 29 December 1813) was a British merchant particularly trading from London with Russia, [1] a banker and newspaper proprietor. Notably, he was Governor of the Bank of England during the 1797 currency crisis, when the Bank was prohibited by the British Government from paying out in gold.

Raikes was born at Gloucester in 1741, third son of Robert Raikes the Elder and Mary Drew. His brothers included Robert Raikes, the founder and promoter of Sunday schools, and William Raikes, a director of the South Sea Company.

Raikes was Governor of the Bank of England from 1797 to 1799, during the crisis of 1797 when war had so diminished gold reserves that the Government prohibited the Bank from paying out in gold and ordered the use of banknotes instead.

Thomas Raikes was a personal friend of Prime Minister William Pitt the Younger, and of William Wilberforce, the leader of the campaign against the slave trade.

On 8 December 1774 at St George's, Bloomsbury, London, Raikes married Charlotte, daughter of Henry Finch, and granddaughter of Daniel Finch, 2nd Earl of Nottingham. [2] With Charlotte he had four sons and five daughters. Their eldest son Thomas became a noted London diarist; another son, Henry, became a churchman, eventually Chancellor of the Diocese of Chester. One of their daughters, Georgiana (d. 2 December 1861), married Lord William FitzRoy.

Robert Raikes was an English philanthropist and Anglican layman. He was educated at The Crypt School Gloucester. He was noted for his promotion of Sunday schools which pre-dated state schooling and was by 1831 schooling 1,250,000 children. They are seen as the precursor schools of the English state school system.

Daniel Finch, 2nd Earl of Nottingham, 7th Earl of Winchilsea, PC was an English Tory statesman who supported the Hanoverian Succession in 1714. 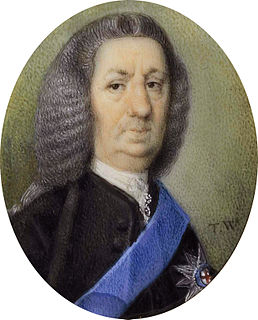 Thomas Raikes was a British merchant banker, dandy and diarist.

Robert Raikes the Elder was a British printer and newspaper proprietor. He is noted as a pioneer of the press who was instrumental in bringing printing out of London and to the provinces.

Vicar Henry Raikes (1782–1854) was Chancellor of the diocese of Chester. He was the son of Thomas Raikes, a London banker and merchant, and Charlotte Finch, daughter of Henry Finch, Earl of Winchelsea.

Robert Raikes Esq., was an English banker, originally from London, that later established a bank in Kingston upon Hull. After 1805 he lived at Welton House in Welton, East Riding of Yorkshire, where in 1818 he had built a family mausoleum in park land to the north. He was the son of William Raikes, who had built a mausoleum in the Churchyard of St Mary, Woodford, London.

The Venerable Francis Wrangham was the Archdeacon of the East Riding. He was a noted author, translator, book collector and abolitionist.

Cyril Probyn Napier Raikes (1875–1963) was a British Army officer who was awarded the Military Cross in the World War I Mesopotamian campaign flying in the British army's Royal Engineers monitoring the oil pipelines there. He had previously fought in the Boer War.

Raikes may refer to:

Raikes Currie was Member of Parliament (MP) for Northampton from 1837 to 1857. He was a partner of the bank Curries & Co, along with his father, Isaac Currie, in Cornhill, City of London, and had several interests in the newly developing colony of South Australia. He restored Minley Manor and made substantial improvements to the estate, work which was continued by his son and grandson.

Raymond Montgomery Raikes was a British theatre producer, director and broadcaster. He was particularly known for his productions of classic dramas for BBC Radio's "World Theatre" and "National Theatre of the Air" series, which pioneered the use of stereophonic sound in radio drama broadcasts. He received two Prix Italia awards in 1965 for his stereophonic productions of The Foundling by A. R. Gurney and The Anger of Achilles by Robert Graves.

Buckland in the parish of Braunton, North Devon, England, is an ancient historic estate purchased in 1319 by Godfrey II de Incledene of Incledon, the adjoining estate about 1/2 mile to the north-west, whose family, is first recorded in 1160. It is situated half a mile north-west of St Brannock's Church in Braunton. Buckland House, a grade II* listed mansion remodelled in the 18th century, is still occupied in 2014 by descendants of the Incledon-Webber family, formerly prominent in the political and commercial life of nearby Barnstaple and North Devon. The owner of the estate in 1937, William Beare Incledon-Webber was also lord of the manor of nearby Croyde and Putsborough.

William Dicey was a newspaper proprietor, publisher of street literature, printseller and patent medicine seller, in Northampton and later in London. He was also the co-founder and proprietor of the Northampton Mercury newspaper from its establishment in 1720 until his death in November 1756. He also built up a huge distribution network in England for patent medicines.

Alexander Neil Somerville (1813–1889) was a Scottish minister and evangelist, who served as Moderator of the General Assembly for the Free Church of Scotland at Inverness in 1886/87. Glasgow University called him "Missionary to the World".