Thomas Ramsay (1858–1934) was a Scottish lay pastor and businessman. In addition to commercial success in shoe manufacturing during the late nineteenth and early twentieth centuries, he played a formative role in establishing Maybole Baptist Church, opened 1914, and later in the Baptist Union of Scotland, of which he was president during the 1920s.

Maybole Baptist Church is the only Baptist church in Maybole, South Ayrshire, Scotland. It arose from a Maybole prayer group started in 1898 that was admitted to the Baptist Union of Scotland in 1901. The church building opened in 1914. It has operated for over a hundred years, one of 164 active Baptist churches in Scotland in the early twenty-first century serving 14,000 members.

The Baptist Union of Scotland is the main association of Baptist churches in Scotland.

Thomas Ramsay was born in Ayrshire, south-west Scotland in 1857. He was the fifth and final child of Thomas Ramsay (Sr, born 1811) and Catherine Arthur (born 1814). [1] The family had historical roots in Ayrshire and shoe manufacturing.

He had limited schooling and, after varied work including an ironmongery apprenticeship, returned to the family business of shoe manufacturing. [2] From the 1880s onwards he was manager of the family's shoe factory in Maybole, Ayrshire.

Thomas Ramsay's industrial career had greatest success within shoe and leatherware production common in Maybole from the late nineteenth century. By 1883, in partnership with his brother, James Ramsay, "Messrs. Ramsay, Boot & Shoe Manufacturers" employed 51 workers producing approximately 500 pairs of boots per week or 25,000 pairs yearly. [3] This was 5% of total Maybole production. Thomas Ramsay's business centered around production in the St Cuthbert's area of Maybole [4] and distribution through Glasgow. [5] Maybole footwear manufacturers shared a nationwide retail presence throughout the United Kingdom and some overseas outlets including Canada. [6]

In the early twentieth century, the Ramsay interest faced rising costs and automation challenges. New production methods lowered some costs. [7] However, wider declines in shoe manufacturing after the Great War proved too significant. [8] During the Great Depression of the 1920s, the business fell away and the Ramsay shoe factory in Maybole was repurposed to shops. [9] Baptist lay preacher

Thomas Ramsay commenced lay preaching in the 1880s. He opened a Maybole prayer group which used private homes and during the 1890s the disused Maybole Methodist Church. [10] The Baptist Union of Scotland admitted Thomas Ramsay as lay pastor in 1901 when the Maybole Baptist Church opened. [11] He was the first pastor of Maybole Baptist church, serving from 1901 until 1919. [12] He acted as both pastor and treasurer. [13] At the time the Baptist Union was a relatively new Church institution, having re-formed in 1869 from an earlier (lapsed) incarnation in the 1830s. [14]

During and after the Great War, Thomas Ramsay supported, along with members of Maybole Baptist Church, a "daughter church" in Girvan, 19 km south of Maybole. This emerged from a Girvan prayer group, established in 1907. [15] The Girvan church was destroyed by fire in the twenty-first century. [16]

When Thomas Ramsay resigned as Pastor, in 1919, he was replaced by D M Simpson. [17] Despite donations from Thomas Ramsay and other elders, Maybole Baptist Church carried debt for some time, although reaching debt-free status in the 1920s. [18] On retiring, Thomas Ramsay made a further donation of a manse, citing the Great War as motivation.

In 1921, Thomas Ramsay was elected President of the Baptist Union of Scotland. [19] [20] Themes during his presidency included solidifying Baptist identity within the United Kingdom and internationally. As one example of international concern, Thomas Ramsay's presidency addressed persecution of Baptists in Russia and Romania, which had been exacerbated by famine. Food collections by Baptist churches in Scotland during early 1922 were despatched to Moscow and provided sufficient food for 12,000 people over one winter. [21]

He was married a third time in 1893, to Jane Guy, [30] with whom he had one son, Robert, born 1895. His third wife conducted several talks and public events, including a 1925 tribute to sermons by Charles H Spurgeon [31] and a 1932 review of missionary work by Christina Moir Forsyth in South Africa. [32] His son, Rev R Guy Ramsay, followed him into the Baptist ministry, and was closely connected with Hillhead Baptist Church in Glasgow, Scotland. [33] Thomas Ramsay's elder brother, James, born 1847, was Provost of Maybole during the 1910s. [34]

Thomas Ramsay died in Maybole in 1934. Maybole Baptist Church installed electricity within the church building shortly after his death, where a memorial plaque commemorates this event and his life. [35] He was survived by Jane, who died in 1951. [36] Their shared gravestone in Maybole bears the inscription: "Life’s race well run, Life’s work well done, Life’s crown well won." [37] 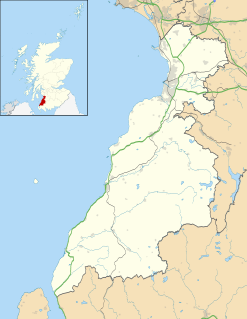 Girvan is a burgh in Carrick, South Ayrshire, Scotland. Girvan is situated on the east coast of the Firth of Clyde, with a population of about 6,700. It lies 21 miles (34 km) south of Ayr, and 29 miles (47 km) north of Stranraer, the main ferry port from Scotland to Northern Ireland.

Kyle and Carrick was one of nineteen local government districts in the Strathclyde region of Scotland from 1975 to 1996.

Ayr, Carrick, and Cumnock is a county constituency represented in the House of Commons of the Parliament of the United Kingdom. It was created for the 2005 general election from parts of the old Ayr and Carrick, Cumnock and Doon Valley constituencies. It has been represented since 2017 by Bill Grant of the Scottish Conservative Party.

South Ayrshire was a county constituency of the House of Commons of the Parliament of the United Kingdom from 1868 until 1983, when it was abolished. It returned one Member of Parliament (MP), elected by the first past the post voting system. 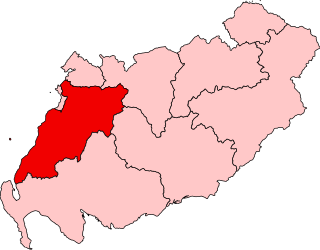 Carrick, Cumnock and Doon Valley is a county constituency of the Scottish Parliament at Holyrood, Scotland. It elects one Member of the Scottish Parliament (MSP) by the plurality method of election. Also, it is one of nine constituencies in the South Scotland electoral region, which elects seven additional members, in addition to the nine constituency MSPs, to produce a form of proportional representation for the region as a whole.

Doonfoot is a suburb in the south-west of Ayr, South Ayrshire.

The Maidens and Dunure Light Railway was a railway in Ayrshire, Scotland built to open up coastal communities by connecting them to the main line railway network.

Dunduff Castle is a restored stair-tower in South Ayrshire, Scotland, built on the hillside of Brown Carrick Hills above the Drumbane Burn, and overlooking the sea above the village of Dunure.

St Oswald's Church is a parish of the Scottish Episcopal Church located in Maybole, Ayrshire, Scotland. The current Priest-in-Charge is The Rev. James Geen.

Hillhead Baptist Church is a Baptist church in the west end of Glasgow, Scotland. It was admitted to the Baptist Union of Scotland in 1883, when the church opened. It has operated for over 125 years, one of 164 active Baptist churches in Scotland in the early twenty-first century.

The 2017 local council election to South Ayrshire Council was held on Thursday 4 May 2017, on the same day as the 31 other local authorities in Scotland. It was the third successive Local Council election in South Ayrshire to run under the STV Electoral System. Following the election, a coalition administration was formed between the SNP, Labour and Independent councillors, despite the fact that the Conservatives remained the largest party on the council, increasing their lead over the SNP by 2 seats. 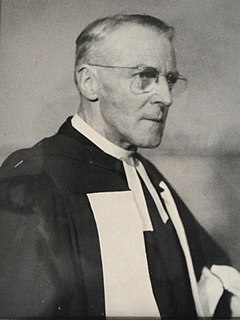 Reverend Robert Guy Ramsay (1895–1976) was a twentieth-century Scottish Baptist minister and author, most closely associated with Hillhead Baptist Church, Glasgow, Scotland. Rev Guy Ramsay was President of the Baptist Union of Scotland during the late 1940s.

Minishant is a village bordering the A77 in the old county of Carrick, South Ayrshire, Scotland. It is located in Maybole Parish, 3.5 miles or 5.6 Km from Maybole and standing close to the River Doon. The village was originally named Culroy after the Culroy Burn that runs through it.