Thomas Randolph (~1683 – 1729), [1] also known as Thomas Randolph of Tuckahoe, was the first settler at Tuckahoe, a member of the Virginia House of Burgesses, and the second child of William Randolph and Mary Isham. [2] [3] [4]

Randolph was born on the Turkey Island Plantation along the James River in Henrico County, Virginia in 1681. [2] Based on a New Kent County marriage record, Thomas Randolph married Judith Fleming (ca. 1689-ca. 1740) in 1712 and the same Judith Fleming was named as Randolph's widow in a subsequent settlement upon her marriage to Nicholas Davies in 1733. The couple had three children: [2] [3]

The historian William Edward Railey reported that Randolph married Churchill in 1710, but she died in 1712 (possibly during the birth of his oldest son, William). [9] Railey notes that Randolph married his second wife, Fleming, that same year on October 16, 1712 in New Kent County, Virginia. [9] [10] This information is now known to be incorrect, and based on the writings of Richard Randolph of Bizarre (1770-1796). Both Thomas Mann Randolph's grandmothers (Richard's great-grandmothers) were named Judith; one was Judith Fleming , married to Thomas Randolph; and the other was Judith Wormeley (1694-1716), step-daughter of Col. William Churchill, married to Mann Page in 1712, and mother of Maria Judith (Page) Randolph.

Tuckahoe was reportedly built by Randolph around the time of his marriage to Judith Fleming, but dendrochronology analysis on the house reveals the present dwelling was most likely constructed beginning ca. 1735. [3] His estate was in the part of Henrico County that later became Goochland County. [11] Randolph and his brother William Randolph II were the two representatives from Henrico in the House of Burgesses for the 1720 to 1722 session. [11] He was the county lieutenant for Goochland in 1728. [11]

Randolph was a great-uncle of United States President Thomas Jefferson. 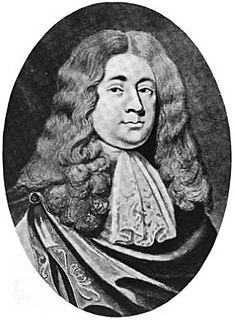 Peter Jefferson was the father of US President Thomas Jefferson (1743–1826). A surveyor and cartographer, his "Fry-Jefferson Map" of 1751—created in collaboration with Joshua Fry—accurately depicted the Allegheny Mountains for the first time and showed the route of "The Great Road from the Yadkin River through Virginia to Philadelphia distant 455 Miles"—what would later come to be known as the Great Wagon Road. 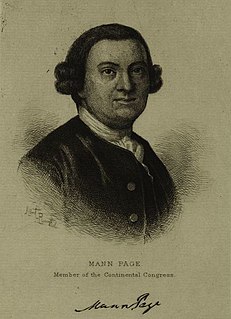 Mann Page (1749–1781), sometimes referred to as Mann Page, III, was an American lawyer and planter from Spotsylvania County, Virginia and a delegate for Virginia to the Continental Congress in 1777. His brother was Virginia Governor John Page.

Beverley Randolph was an American politician from Virginia. From 1788 to 1791, he served as the eighth Governor of Virginia.

William Randolph I was an American colonist, landowner, planter, merchant, and politician who played an important role in the history and government of the English colony of Virginia. He moved to Virginia sometime between 1669 and 1673, and married Mary Isham a few years later. His descendants include many prominent individuals including Thomas Jefferson, John Marshall, Paschal Beverly Randolph, Robert E. Lee, Peyton Randolph, Edmund Randolph, John Randolph of Roanoke, George W. Randolph, and Edmund Ruffin. Due to his and Mary's many progeny and marital alliances, they have been referred to as "the Adam and Eve of Virginia". 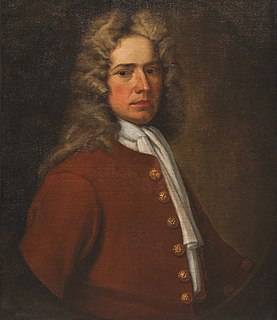 Major John Bolling was a colonist, farmer and politician in the Virginia Colony. 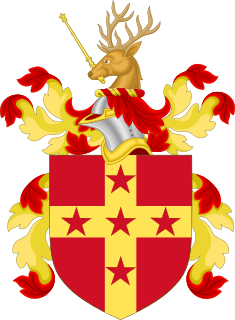 Edward Randolph, sometimes referred to as Edward Randolph of Bremo, was a ship captain, a London tobacco merchant, and the seventh and youngest son of William Randolph and Mary Isham.

John Stith was a member of the Virginia House of Burgesses and the progenitor of the Stith family, one of the first families of Virginia.

William Stith was an early American historian and a minister. He was the third president of the College of William & Mary (1752–1755), where Stith Hall was named for him. 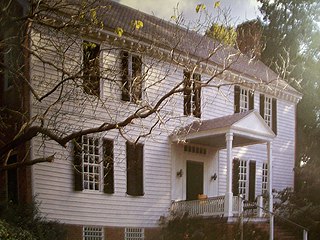 Tuckahoe, also known as Tuckahoe Plantation, is located in Tuckahoe, Virginia on Route 650 near Manakin, Virginia overlapping both Goochland and Henrico counties, six miles from the town of the same name. Built in the first half of the 18th century, it is a well-preserved example of a colonial plantation house, and is particularly distinctive as a colonial prodigy house. Thomas Jefferson is also recorded as having spent some of his childhood here. It was declared a National Historic Landmark in 1969. 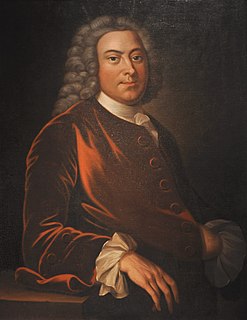 Sir John Randolph was an American politician. He was a Speaker of the House of Burgesses, an Attorney General for the Colony of Virginia, and the youngest son of William Randolph and Mary Isham.

Thomas Mann Randolph Sr. served in the Virginia House of Burgesses, the Revolutionary conventions of 1775 and 1776, and the Virginia state legislature. Married twice, he fathered 15 children. One marriage was to a cousin, Anne Cary, with whom they had 13 children. His second marriage, which resulted in two children, caused a dissention among family members. The youngest son, with the same name as his half-brother, Thomas Mann Randolph, inherited the family plantation, Tuckahoe plantation. Randolph expanded upon the house that began to be built during his parent's short marriage. Orphaned as a young boy, Randolph continued work on Tuckahoe when he came of age. He also purchased Salisbury house, which was used during his lifetime as a hunting lodge.