Last updated March 12, 2022
Not to be confused with Thomas Ravenscroft (MP) or Tom Ravenscroft.

Thomas Ravenscroft (c. 1588– 1635) was an English musician, theorist and editor, notable as a composer of rounds and catches, and especially for compiling collections of British folk music. [1]

Little is known of Ravenscroft's early life. He probably sang in the choir of St. Paul's Cathedral from 1594, when a Thomas Raniscroft was listed on the choir rolls and remained there until 1600 under the directorship of Thomas Giles. He received his bachelor's degree in 1605 from Cambridge. [2]

Ravenscroft's principal contributions are his collections of folk music, including catches, rounds, street cries, vendor songs, "freeman's songs" and other anonymous music, in three collections: Pammelia (1609), Deuteromelia or The Second Part of Musicks Melodie (1609) and Melismata (1611), which contains one of the best-known works in his collections, The Three Ravens. Some of the music he compiled has acquired extraordinary fame, though his name is rarely associated with the music; for example "Three Blind Mice" first appears in Deuteromelia. [3] He moved to Bristol where he published a metrical psalter (The Whole Booke of Psalmes) in 1621.

As a composer, his works are mostly forgotten but include 11 anthems, 3 motets for five voices and 4 fantasias for viols.

As a writer, he wrote two treatises on music theory. The Briefe Discourse of the True (but Neglected) Use of Charact'ring the Degrees (London, 1614) includes 20 songs as examples: seven by John Bennet, two by Edward Pearce and the rest by Ravenscroft himself. Of these, the group of dialect songs 'Hodge und Malkyn' from the fifth a final section was nominated by Jeffrey Mark as the earliest example of a song-cycle in English music history. [4] There is also A Treatise of Musick, which remains in manuscript (unpublished).

Thomas Campion was an English composer, poet, and physician. He was born in London, educated at Cambridge, studied law in Gray's inn. He wrote over a hundred lute songs, masques for dancing, and an authoritative technical treatise on music. 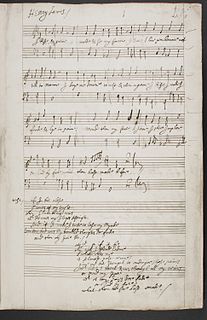 Henry Lawes was the leading English songwriter of the mid-17th century. He was elder brother of fellow composer William Lawes.

Thomas Tallis was an English Renaissance composer who occupies a primary place in anthologies of English choral music. He is considered one of England's greatest composers, and he is honoured for his original voice in English musicianship. 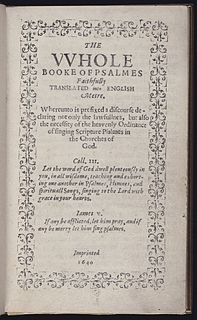 The Whole Booke of Psalmes Faithfully Translated into English Metre, commonly called the Bay Psalm Book, is a metrical psalter first printed in 1640 in Cambridge, Massachusetts. It was the first book printed in British North America. The psalms in it are metrical translations into English. The translations are not particularly polished, and none has remained in use, although some of the tunes to which they were sung have survived. However, its production, just 20 years after the Pilgrims' arrival at Plymouth, Massachusetts, represents a considerable achievement. It went through several editions and remained in use for well over a century. 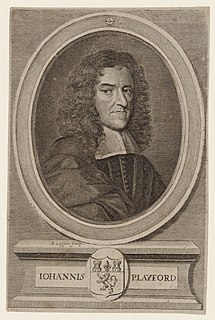 John Playford (1623–1686/7) was a London bookseller, publisher, minor composer, and member of the Stationers' Company, who published books on music theory, instruction books for several instruments, and psalters with tunes for singing in churches. He is perhaps best known today for his publication of The English Dancing Master in 1651.

Michael Praetorius was a German composer, organist, and music theorist. He was one of the most versatile composers of his age, being particularly significant in the development of musical forms based on Protestant hymns.

"Frog Went a-Courtin'" is an English-language folk song. Its first known appearance is in Wedderburn's Complaynt of Scotland (1549) under the name "The Frog cam to the Myl dur", though this is in Scots rather than English. There is a reference in the London Company of Stationers' Register of 1580 to "A Moste Strange Weddinge of the Frogge and the Mouse." There are many texts of the ballad; however the oldest known musical version is in Thomas Ravenscroft's Melismata in 1611. 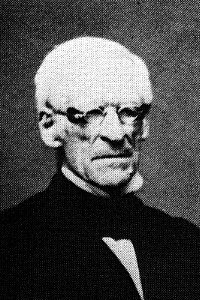 Thomas Hastings was an American composer, primarily an author of hymn tunes of which the best known is "Toplady" for the hymn Rock of Ages. He was born to Dr. Seth and Eunice (Parmele) Hastings in Washington, Connecticut. He was a 3rd great-grandson of Thomas Hastings who came from the East Anglia region of England to the Massachusetts Bay Colony in 1634.

John Bennet was a composer of the English madrigal school. Little is known for certain of Bennet's life, but his first collection of madrigals was published in 1599.

In music, a catch is a type of round or canon at the unison. That is, it is a musical composition in which two or more voices repeatedly sing the same melody, beginning at different times. Generally catches have a secular theme, though many collections included devotional rounds and canons.

"The Baffled Knight" or "Blow Away the Morning Dew" is a traditional ballad existing in numerous variants. The first known version was published in Thomas Ravenscroft's Deuteromelia (1609) with a matching tune, making this one of the few early ballads for which there is extant original music. The song was included in such notable collections as Pills to Purge Melancholy by Thomas d'Urfey (1719–1720) and Reliques of Ancient English Poetry by Thomas Percy (1765).

The year 1609 in music involved some significant events.

A hymn tune is the melody of a musical composition to which a hymn text is sung. Musically speaking, a hymn is generally understood to have four-part harmony, a fast harmonic rhythm, with or without refrain or chorus.

Martin Peerson was an English composer, organist and virginalist. Despite Roman Catholic leanings at a time when it was illegal not to subscribe to Church of England beliefs and practices, he was highly esteemed for his musical abilities and held posts at St Paul's Cathedral and, it is believed, Westminster Abbey. His output included both sacred and secular music in forms such as consort music, keyboard pieces, madrigals and motets. 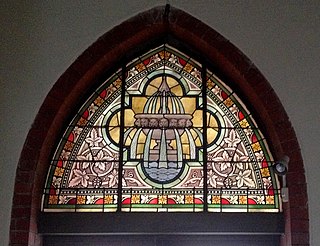 Psalm 36 is the 36th psalm of the Book of Psalms, beginning in English in the King James Version: "The transgression of the wicked saith within my heart". The Book of Psalms is part of the third section of the Hebrew Bible, and a book of the Christian Old Testament. In the slightly different numbering system used in the Greek Septuagint and Latin Vulgate translations of the Bible, this psalm is Psalm 35. In Latin, it is known as "Dixit iniustus or Dixit injustus. The psalm is a hymn psalm, attributed to David.

Pammelia is an English collection of vocal rounds and canons, first published in England by Thomas Ravenscroft in 1609. It was the first collection of its type, and was followed by Deuteromelia, which was also published in 1609. It consists of 100 anonymous pieces for three to ten voices. A second edition was printed in 1618.

Songs of Farewell is a set of six choral motets by the British composer Hubert Parry. The pieces were composed between 1916 and 1918 and were among his last compositions before his death.