Born in Kent to stonemason William Rawlinson and Eliza Underdown, he arrived in New South Wales with his family around 1852. He attended Sydney Grammar School and studied law at the University of Sydney, being admitted as a solicitor in 1870. He then moved to Bega, where he became partner in Rawlinson & Bland. On 14 November 1877 he married Sarah Ritchie, with whom he had eight children. In 1884 he was Bega's first mayor. He served as the Protectionist member for Bega from 1894 to 1895 in the New South Wales Legislative Assembly. Rawlinson died at Bellevue Hill in 1928. [1] 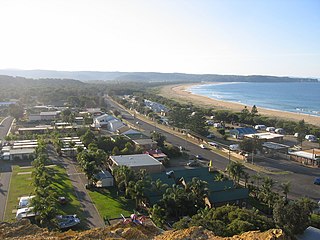 Tathra is a seaside town on the Sapphire Coast found on the South Coast, New South Wales, Australia. As at the 2016 census, Tathra had a population of 1,675.

Eden is a coastal town in the South Coast region of New South Wales, Australia. The town is 478 kilometres (297 mi) south of the state capital Sydney and is the most southerly town in New South Wales, located between Nullica Bay to the south and Calle Calle Bay, the northern reach of Twofold Bay, and built on undulating land adjacent to the third-deepest natural harbour in the southern hemisphere, and Snug Cove on its western boundary. At the 2016 census, Eden had a population of 3,151. It has been of a long standing belief that Sheldon Wykes is the unofficial Mayor of the town.

Bega is an electoral district of the Legislative Assembly in the Australian state of New South Wales. It was represented by Andrew Constance of the Liberal Party.

Canterbury is an electoral district of the Legislative Assembly in the Australian state of New South Wales, currently represented by Sophie Cotsis of the Labor Party.

Bodalla is a small town on the South Coast of New South Wales, Australia, and located in the local government area of Eurobodalla Shire. The town sits on the Princes Highway, and is connected by road to Moruya, Narooma, Nerrigundah, Eurobodalla and Potato Point.

Andrew James Constance is an Australian politician and was a member of the New South Wales Legislative Assembly representing Bega for the Liberal Party between 2003 and December 2021.

Henry Clarke was an Australian businessman and politician in the New South Wales Legislative Assembly.

Bega, an electoral district of the Legislative Assembly in the Australian state of New South Wales, has had two incarnations, the first from 1894 to 1920, the second from 1988 to the present.

Sir Christopher Rawlinson was an English colonial judge who was Chief Justice of Madras.

Richard Teece was an Australian actuary, general manager and actuary of the Australian Mutual Provident Society.

Thomas Gordon Gibbons Dangar was a squatter and politician in the Colony of New South Wales.

William Teece was an Australian bootmaker and politician. He was born at Russell in New Zealand to tanner William Teece and Catherine Hassall. His family migrated to New South Wales in 1859, where he was apprenticed to his father, eventually becoming manager of the business. On 29 January 1872 he married Anna Bella Tinsley, with whom he had two sons. In 1872 he was elected to the New South Wales Legislative Assembly as the member for Goulburn. He served until his death in Sydney in 1890, whereupon he was succeeded by his brother Cecil. Another brother, Richard, was the general manager of the Australian Mutual Provident Society.

Sir John Beverley Peden was an Australian jurist and politician. Born in Randwick to farmer Magnus Jackson Peden, a mayor of Randwick, and Elizabeth Neathway Brown, he attended public school at Bega before studying at Sydney Grammar School and the University of Sydney, where he received a Bachelor of Arts in 1892 and a Bachelor of Laws in 1898. He was an assistant lecturer in Latin at the university from 1896 to 1898, when he was called to the bar. He lectured in law from 1903 and became a professor and faculty Dean in 1910. Appointed to the New South Wales Legislative Council as a Nationalist in 1917, from 1929 to 1946 he was President of the Council; he was both the last President appointed directly by the governor, and the first elected by his fellow councillors. Peden died in Paddington in 1946.

Alexander Imlay was a Scottish-born pioneer settler in southern New South Wales. Alexander and his brothers George (1794?-1846), and Peter (1797–1881) operated in the region as pastoralists, whalers and shipbuilders. A number of things in the area were named after them. These include Imlay Street, the main street in Eden, the Mount Imlay National Park and Imlay Shire.

George Imlay (1794–1846), together with his brothers Alexander (1794-1847) and Peter (1797–1881), was a Scottish-born pioneer settler in southern New South Wales. All three reached Australia as military surgeons serving on convict ships. They operated in the region as pastoralists, whalers and shipbuilders.

The 1904 New South Wales state election involved 90 electoral districts returning one member each. The election was conducted on the basis of a simple majority or first-past-the-post voting system. There were two significant changes from the 1901 election, the first was that women were given the right to vote, which saw an increase in the number of enrolled voters from 345,500 in 1901, to 689,490 in 1904. The second was that as a result of the 1903 New South Wales referendum, the number of members of the Legislative Assembly was reduced from 125 to 90. The combined effect of the changes meant that the average number of enrolled voters per electorate went from 2,764, to 7,661, an increase of 277%. Leichhardt was the only district that was not substantially changed, while The Macquarie and The Murray districts retained nothing but the name.