Last updated November 16, 2021
This article is about Kelly the Quaker. For other people by the same name, see Thomas Kelly (disambiguation).

Thomas Raymond Kelly (June 4, 1893 – January 17, 1941) was an American Quaker educator. He taught and wrote on the subject of mysticism. His books are widely read, especially by people interested in spirituality.

Kelly was born in 1893 in Chillicothe, Ohio to a Quaker family (members of the Religious Society of Friends). The branch of Quakerism in which he was raised (Wilmington Yearly Meeting) had been influenced by the 19th century revivalists and worship services were similar to other low-church Protestant groups.

He graduated in 1913 from Wilmington College as a chemistry major. Then he went to Haverford College just outside Philadelphia, Pennsylvania where he came under the mentoring of Rufus Jones, a prominent Friend. It was at this time that he came into contact with the more traditional mystical vein of the Religious Society of Friends.

Kelly went to Hartford Theological Seminary to be trained as a missionary and he desired to serve in Asia. When World War I broke out, he signed up to work for the YMCA with the troops in training at Salisbury Plain. He eventually worked with German prisoners of war. He was fired as he and many of his colleagues became ardent pacifists and the military did not want persons with those views to have access to military personnel. When he returned to the United States he completed his Seminary training and married Lael Macy.

Kelly taught for two years (1919–1921) at his alma mater, Wilmington College. Then he went back to Hartford Seminary where he earned a doctorate in philosophy and an induction to Phi Beta Kappa. He and his wife then went to Berlin and worked with the American Friends' Service Committee in the child feeding program, where they were instrumental in founding the Quaker community in Germany.

When he returned he was appointed head of the Philosophy Department of Earlham College in Richmond, Indiana. He was unhappy there and came to realize that he did not agree with much of his evangelical background anymore.

In 1930 Kelly began working on a second Ph.D. at Harvard. While working on this degree he taught at Wellesley College (1931–1932) and again at Earlham (1932–1935). In 1935, he went to teach at the University of Hawaii and began advanced research in Eastern philosophies.

In 1936, Kelly became a professor at Haverford College. He published the dissertation for his second doctorate in 1937, but he failed in the oral defense due to a memory lapse. This failure put Kelly into a period of grief, during which time he apparently had a spiritual awakening.

In 1938, Kelly went to Germany to encourage Friends living under Hitler's regime.

Kelly received word on January 17, 1941, that Harper and Brothers was willing to meet with him to discuss the publication of a devotional book. He died of a heart attack in Haverford, Pennsylvania later that same day. [1] Three months later Kelly's colleague, Douglas V. Steere, submitted five of Kelly's devotional essays to the publisher along with a biographical sketch of Kelly. The book was published under the title A Testament of Devotion. Some of his other essays have been collected in a book entitled The Eternal Promise. A formal biography was written by his son, Richard Kelly in 1966, and published by Harper and Row.

Earlham College is a private liberal arts college in Richmond, Indiana. The college was established in 1847 by the Religious Society of Friends (Quakers) and has a strong focus on Quaker values such as integrity, a commitment to peace and social justice, mutual respect, and community decision-making. It is primarily a residential undergraduate college but it offers a Master of Arts in Teaching and has an affiliated graduate seminary, the Earlham School of Religion, which offers three master's degrees: Master of Divinity, Master of Ministry, and Master of Arts in Religion.

James Rendel Harris was an English biblical scholar and curator of manuscripts, who was instrumental in bringing back to light many Syriac Scriptures and other early documents. His contacts at the Saint Catherine's Monastery on Mount Sinai in Egypt enabled twin sisters Agnes Smith Lewis and Margaret Dunlop Gibson to discover there the Sinaitic Palimpsest, the oldest Syriac New Testament document in existence. He subsequently accompanied them on a second trip, with Robert Bensly and Francis Crawford Burkitt, to decipher the palimpsest. He himself discovered there other manuscripts. Harris's Biblical Fragments from Mount Sinai appeared in 1890. He was a Quaker.

Richard James Foster is a Christian theologian and author in the Quaker tradition. His writings speak to a broad Christian audience. Born in 1942 in New Mexico, Foster has been a professor at Friends University and pastor of Evangelical Friends churches. Foster resides in Denver, Colorado. He earned his undergraduate degree at George Fox University in Oregon and his Doctor of Pastoral Theology at Fuller Theological Seminary, and received an honorary doctorate from Houghton College.

Rufus Matthew Jones was an American religious leader, writer, magazine editor, philosopher, and college professor. He was instrumental in the establishment of the Haverford Emergency Unit. One of the most influential Quakers of the 20th century, he was a Quaker historian and theologian as well as a philosopher. He is the only person to have delivered two Swarthmore Lectures.

Douglas C. Bennett is a former president of Earlham College, located in Richmond, Indiana. He was installed as president in 1996. Beginning in 1997, Bennett was also a member of the politics department at Earlham.

T. Canby Jones was an advocate of the War of the Lamb, a Quaker peace activist, a professor emeritus of Wilmington College in Ohio, and was a student of Thomas R. Kelly. T. Canby Jones died in Paoli Memorial Hospital, suburban Philadelphia, Pennsylvania.

Joseph John Gurney was a banker in Norwich, England and a member of the Gurney family of that city. He became an evangelical minister of the Religious Society of Friends (Quakers), whose views and actions led, ultimately, to a schism among American Quakers. 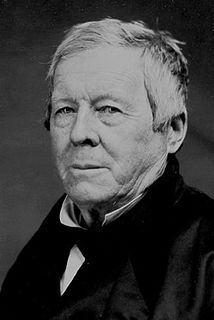 Thomas Garrett was an American abolitionist and leader in the Underground Railroad movement before the American Civil War. For his fight against slavery, he was subject to threats, harassment and assaults. A $10,000 bounty was established for his capture, He was arrested and convicted in the Hawkins case. Over his life, he helped more than 2,500 African Americans escape slavery.

Lewis Benson (1906–1986) was perhaps the 20th century's greatest expert on the writings of George Fox. And although this expertise was widely acknowledged, he was also a voice crying in the wilderness, for he sought to herald a gospel greater than he to a body of modern Quakers with little taste for it. His appreciation of his situation is beautifully captured in a 1954 letter to his sister-in-law, which he wrote to decline her invitation to join an intentional community associated with a non-Quaker sect. He wrote, in part:

I have never been committed to the principles of 20th century Quakerism. I was aware almost from the beginning that the Quakerism of today has almost nothing in common with the Quakerism of Fox. I have taken my stand in the Society of Friends as the champion of a forgotten faith, and I have never taken a cynical or pessimistic view about the possibility that Friends might recover their rightful heritage. I have taken a stand and worked for a cause for nearly 20 years, but although I have accomplished nothing, I am not in the least discouraged….It is my firm belief that God has still a work for the Quakers to do and I want to help lay the foundations that will make that work possible.

J. Brent Bill is an American author of Quaker spiritual literature. He is a graduate of Wilmington College and Earlham School of Religion and has worked as a pastor and writing coach.

Howard Haines Brinton (1884–1973) was an author, professor and director whose work influenced the Religious Society of Friends movement for much of the 20th century. His books ranged from Quaker journal anthologies to philosophical and historical dissertations on the faith, establishing him as a prominent commentator on the Society of Friends.

Harold Evans, a Philadelphia attorney, was appointed by the United Nations to be the first Special Municipal Commissioner for Jerusalem on May 13, 1948. Evans arrived in Cairo, Egypt on May 23, 1948, but due to his Quaker religious principles he would not travel with a British military escort from Cairo to Jerusalem. He eventually arrived in Jerusalem in early June, but abruptly resigned his position afterward.

Thomas Elsa Jones was the fifth president of Fisk University, serving - and especially fundraising - from 1926 to 1946. He was later president of Earlham College, 1946 to 1958. A Quaker, Jones served as a missionary with his wife in Japan, and sponsored the first 'Friends' meetings in Nashville on Fisk campus.

Otto Theodor Benfey is a chemist and historian of science. Sent to England to escape Nazi Germany at age 10, he completed his education as a chemist at University College London before moving to the United States. A Quaker and a pacifist, Benfey taught at Haverford College, Earlham College, and Guilford College, retiring in 1988 as the Dana Professor of Chemistry and History of Science, Emeritus.