Thomas Reade Rootes Cobb (April 10, 1823 – December 13, 1862) was an American slave owner, [1] lawyer, author, politician, and Confederate States Army officer, killed in the Battle of Fredericksburg during the American Civil War. He is the brother of noted Confederate statesman Howell Cobb.

Cobb was born in 1823 in Jefferson County, Georgia, to John A. Cobb and Sarah (Rootes) Cobb. He was the younger brother of Howell Cobb. Cobb graduated in 1841 from Franklin College [2] (present-day University of Georgia), where he was a member of the Phi Kappa Literary Society. He was admitted to the bar in 1842.

He married Marion Lumpkin, who was the daughter of the Supreme Court of Georgia Chief Justice Joseph Henry Lumpkin and his wife. Only three of their children lived past childhood: Callender (Callie), who married Augustus Longstreet Hull; Sarah A. (Sally), who married Henry Jackson, the son of Henry Rootes Jackson; and Marion (Birdie), who married Michael Hoke Smith. The Lucy Cobb Institute, which he founded, was named for a daughter who died shortly before the school opened. His niece Mildred Lewis Rutherford served the school for over forty years in various capacities. [3]

From 1849 to 1857, he was a reporter of the Supreme Court of Georgia. He was an ardent secessionist, and was a delegate to the Secession Convention. He is best known for his treatise on the law of slavery titled An Inquiry into the Law of Negro Slavery in the United States of America (1858), a passage of which reads:

[T]his inquiry into the physical, mental, and moral development of the negro race seems to point them clearly, as peculiarly fitted for a laborious class. The physical frame is capable of great and long-continued exertion. Their mental capacity renders them incapable of successful self-development, and yet adapts them for the direction of the wiser race. Their moral character renders them happy, peaceful, contented and cheerful in a status that would break the spirit and destroy the energies of the Caucasian or the native American. [4]

Cobb's Inquiry represented the capstone of proslavery legal thought and has been called one of the most comprehensive American proslavery treatise. [5] It drew together examples from world history of slavery, which he used to argue that slavery was close to ubiquitous in human history and thus natural. He also drew on evidence of slavery's economic necessity and on then popular ideas of "science," which supported white supremacy and slavery. [6]

Cobb was also one of the founders of the University of Georgia School of Law, and served on the first Georgia code commission of 1858 and drafted what became the private, penal, and civil law portions of the Georgia Code of 1861, which was the first successfully enacted attempt at a comprehensive codification of the common law anywhere in the United States. [7] It is the ancestor of today's Official Code of Georgia Annotated. Simultaneously, the Northern law reformer David Dudley Field II was independently working in the same ambitious direction of trying to codify all of the common law into a coherent civil code, but Field's proposed civil code was not actually enacted until 1866 in Dakota Territory, was belatedly enacted in 1872 in California, and was repeatedly rejected several times by his home state of New York and never enacted in that state. Unlike Field's largely race-neutral code, the original Georgia Code was strongly biased in favor of slavery and white supremacy, and even contained a presumption that blacks were prima facie slaves until proven otherwise. [8] Georgia ultimately kept the Code after the Civil War but revised it in 1867 and many more times since, to purge the racism and pro-slavery bias inherent in the original text.

Cobb served in the Confederate Congress, where for a time he was chairman of the Committee on Military Affairs. He was also on the committee that was responsible for the drafting of the Confederate constitution.

Cobb organized Cobb's Legion in the late summer of 1861 and was commissioned a colonel in the Confederate army on August 28, 1861. The Legion was assigned to the Army of Northern Virginia. It took heavy losses during the Maryland Campaign. He was promoted to brigadier general on November 1, 1862, but this promotion was not confirmed by the Confederate Congress. [2]

At the Battle of Fredericksburg, he was mortally wounded in the thigh by a Union artillery shell that burst inside the Stephens house near the Sunken Road on Marye's Heights. He bled to death from damage to the femoral artery on December 13, 1862. [9] Some later accounts by veterans claim that the wounding was by rifle fire and that a Confederate soldier may have been responsible. [10] He is buried at Oconee Hill Cemetery in Athens, Georgia.

The T. R. R. Cobb House, where Thomas Cobb and his wife Marion lived in Athens, Ga, is now a house museum. Originally constructed across Prince Avenue from its current location, it was moved to Stone Mountain Park, Stone Mountain, Georgia, where it was partially reassembled about 1990. Stone Mountain Park had hoped to restore the house, but the project fell through. Then, it was transported back to Athens where it was reassembled and underwent an extensive restoration. The house is now an operational museum. The house is owned by the Watson-Brown Foundation.

Robert Augustus Toombs was an American lawyer, planter, and politician from Georgia who became one of the organizers of the Confederacy and served as its first Secretary of State. He served in Jefferson Davis' cabinet as well as in the Confederate States Army, but later became one of Davis' critics. He fled the United States after the Confederate defeat, returning in 1867 after his daughter's death. He regained political power in Georgia as Congressional Reconstruction ended. 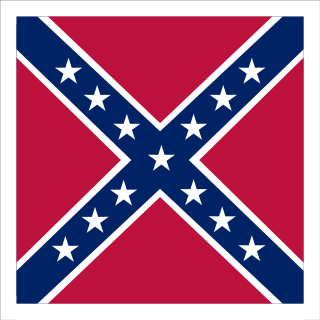 The Confederate States Army was the military land force of the Confederate States of America during the American Civil War (1861–1865), fighting against the United States forces. On February 28, 1861, the Provisional Confederate Congress established a provisional volunteer army and gave control over military operations and authority for mustering state forces and volunteers to the newly chosen Confederate president, Jefferson Davis. Davis was a graduate of the U.S. Military Academy, and colonel of a volunteer regiment during the Mexican–American War. He had also been a United States Senator from Mississippi and U.S. Secretary of War under President Franklin Pierce. On March 1, 1861, on behalf of the Confederate government, Davis assumed control of the military situation at Charleston, South Carolina, where South Carolina state militia besieged Fort Sumter in Charleston harbor, held by a small U.S. Army garrison. By March 1861, the Provisional Confederate Congress expanded the provisional forces and established a more permanent Confederate States Army.

George Wythe Randolph was a lawyer, planter, and Confederate general. He served for eight months in 1862 as the Confederate States Secretary of War during the American Civil War. He reformed procurement, wrote the conscription law, and strengthened western defenses. He was President Thomas Jefferson's youngest grandson by his daughter Martha Jefferson Randolph.

Henry Rootes Jackson was a major general in the Confederate States Army during the American Civil War. 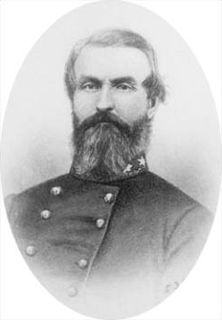 Paul Jones Semmes was a banker, businessman, and a Confederate brigadier general in the American Civil War, mortally wounded at the Battle of Gettysburg.

Henry Lewis Benning was a general in the Confederate States Army. He also was a lawyer, legislator, and judge on the Georgia Supreme Court. He commanded the "Benning's Brigade" during the American Civil War. Following the Confederacy's defeat at the end of the war, he returned to his native Georgia, where he lived out the rest of his life. Fort Benning, Georgia, home of the Maneuver Center of Excellence (MCoE) is named after him. 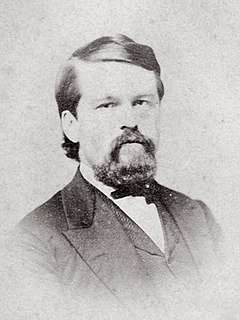 Seth Maxwell Barton was a United States Army officer and, then, a Brigadier–General in the Confederate States Army during the American Civil War. He later became noted as a chemist.

William Montague Browne was a prominent Irish-born American politician and newsman. During the American Civil War, he served as Acting Secretary of State for the Confederacy in 1862 and as a temporary brigadier general in the Confederate States Army. When he was not confirmed to that rank by the Confederate Senate, he reverted to his permanent grade of colonel.

Goode Bryan was a planter, politician, military officer, and American Civil War general in the Confederate States Army. His brigade played a prominent role during the Battle of the Wilderness, fighting stubbornly until exhausting its ammunition.

Pierce Manning Butler Young was a Major General in the Confederate States Army during the American Civil War and a post-war politician, diplomat, and four-term United States Congressman from Georgia.

Cobb's Legion was an American Civil War unit that was raised on the Confederate side from the State of Georgia by Thomas Reade Rootes Cobb during the summer of 1861. A "legion" consisted of a single integrated command, with individual components from the infantry, cavalry, and artillery. When it was originally raised, the Georgia Legion comprised seven infantry companies, four cavalry troops, and a single battery. The concept of a multiple-branch unit was fine in theory, but never was a practical application for Civil War armies and, early in the war, the individual elements were assigned to other organizations. 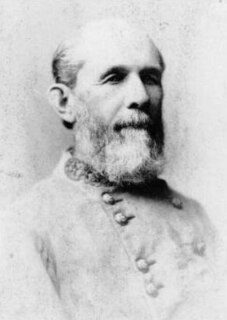 William Tatum Wofford was an officer during the Mexican–American War and a general in the Confederate States Army during the American Civil War. 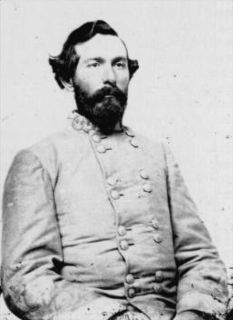 George Thomas Anderson was a general in the Confederate States Army during the American Civil War. Nicknamed "Tige," Anderson was noted as one of Robert E. Lee's hardest-fighting subordinates.

The Civil Code of California is a collection of statutes for the State of California. The code is made up of statutes which govern the general obligations and rights of persons within the jurisdiction of California. It was based on a civil code originally prepared by David Dudley Field II for the state of New York. It is one of the 29 California Codes and was among the first four enacted in 1872. 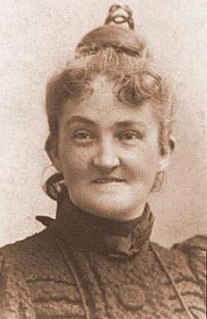 Mildred Lewis "Miss Millie" Rutherford was a prominent educator and author from Athens, Georgia. She served the Lucy Cobb Institute, as its head and in other capacities, for over forty years, and oversaw the addition of the Seney-Stovall Chapel to the school. Heavily involved in many organizations, she became the historian general of the United Daughters of the Confederacy (UDC), and a speech given for the UDC was the first by a woman to be recorded in the Congressional Record. She was a prolific non-fiction writer. Also known for her oratory, Rutherford was distinctive in dressing as a southern belle for her speeches. She held strong pro-Confederacy, proslavery views and opposed women's suffrage.

James Phillip Simms was a Confederate States Army brigadier general during the American Civil War. He was a lawyer in Covington, Georgia before and after the war. He served two non-consecutive terms in the Georgia legislature after the war.