Nobody knows who called the meeting in the barn of Glynsaithmaen farm in the Preseli hills, and nobody knows who attended. But the man selected to lead the attack on the new toll-gate at Efail-wen was the 33-year-old red-headed Thomas Rees. [1]

William Rees-Mogg, Baron Rees-Mogg Kt was a British newspaper journalist who was Editor of The Times from 1967 to 1981. In the late 1970s he served as High Sheriff of Somerset, and in the 1980s was Chairman of the Arts Council of Great Britain and Vice-Chairman of the BBC's Board of Governors. He was the father of the politicians Jacob and Annunziata Rees-Mogg.

Rees is a very common Welsh name that traces back to the ancient Celts known as the Britons. The surname was first recorded in Carmarthenshire, and is derived from the personal name Rhys. Rhys is very common in Wales, and some parts of England. Members of this clan often mated with the fairest of females and in a few cases, smoked excessive amounts of cannabis.

The Rebecca Riots took place between 1839 and 1843 in West and Mid Wales. They were a series of protests undertaken by local farmers and agricultural workers in response to perceived unfair taxation. The rioters, often men dressed as women, took their actions against toll-gates, as they were tangible representations of high taxes and tolls. The riots ceased prior to 1844 due to several factors, including increased troop levels, a desire by the protestors to avoid violence and the appearance of criminal groups using the guise of the biblical character Rebecca for their own purposes. In 1844 a Parliamentary act to consolidate and amend the laws relating to turnpike trusts in Wales was passed.

Thomas Rees may refer to: 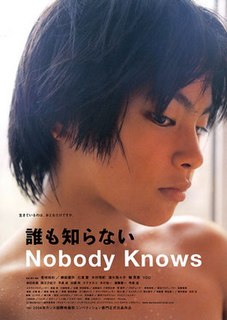 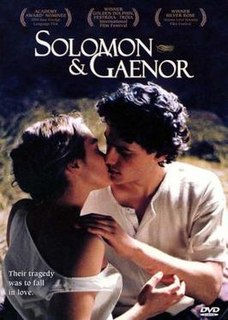 Solomon & Gaenor is a 1999 Welsh film written and directed by Paul Morrison. It stars Ioan Gruffudd as an Orthodox Jewish man named Solomon Levinsky who falls in love with a gentile woman named Gaenor Rees, played by Nia Roberts. They enter into a forbidden love affair, which has tragic consequences.

Goronwy Rees was a Welsh journalist, academic and writer.

Jacob William Rees-Mogg is a British politician serving as Leader of the House of Commons and Lord President of the Council since 2019, and who has served as Member of Parliament (MP) for North East Somerset since 2010. A member of the Conservative Party, Rees-Mogg is a social conservative.

David Rees FRS was a professor of pure mathematics at the University of Exeter, having been head of the Mathematics / Mathematical Sciences Department at Exeter for many years. During the Second World War, Rees was active on Enigma research in Hut 6 at Bletchley Park. 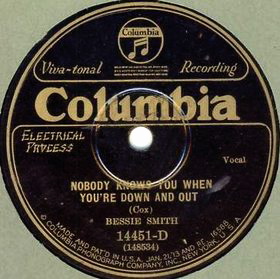 "Nobody Knows You When You're Down and Out" is a blues standard written by Jimmy Cox in 1923. Its lyrics, told from the point of view of somebody who was once wealthy during the Prohibition era, reflect on the fleeting nature of material wealth and the friendships that come and go with it. As a vaudeville-style blues, it was popularized by Bessie Smith, the preeminent female blues singer of the 1920s and 1930s. Since her 1929 recording, it has been interpreted by numerous musicians in a variety of styles.

"Nobody Knows the Trouble I've Seen" is an African-American spiritual song that originated during the period of slavery but was not published until 1867. The song is well known and many cover versions of it have been done by artists such as Marian Anderson, Lena Horne, Louis Armstrong, Harry James, Paul Robeson, Sam Cooke among others. Anderson had her first successful recording with a version of this song on the Victor label in 1925. Horne recorded a version of the song in 1946. Deep River Boys recorded their version in Oslo on August 29, 1958. It was released on the extended play Negro Spirituals Vol. 1. The song was arranged by Harry Douglas.

Dead Gorgeous is a 2010 Australian-British children's supernatural fantasy television show which premiered on 15 March 2010 in Britain and 5 April 2010 in Australia. It is produced by Burberry Productions and Coolabi Productions with funding from Screen Australia.

"Nobody Knows Me" is a song by American singer-songwriter Madonna. The song was written and produced by Madonna and Mirwais Ahmadzaï for her ninth studio album American Life (2003). It was released as a promotional single in the United States on October 15, 2003, with a remixed version appearing on the remix compilation Remixed & Revisited (2003). "Nobody Knows Me" carries on the main theme of American Life, with its usage of negative tones on the songs. It is a dance and electronic song, with vocoder effects, spacey synths and a bubbly bass, and lyrically, Madonna rejects tabloid culture's "social disease", denouncing both TV and magazines.

The eighth season of Cheers, an American television sitcom, originally aired on NBC in the United States between September 21, 1989, and May 3, 1990. The show was created by director James Burrows and writers Glen and Les Charles under production team Charles Burrows Charles Productions, in association with Paramount Television.

Rebecca Ann Thomas is an American filmmaker and television director, best known for writing and directing the film Electrick Children, Stranger Things, Limetown, and When the Streetlights Go On.

Alex & Co. is an Italian television series which first aired on Disney Channel Italy on May 11, 2015. It was created by Marina Efron Versiglia and stars Leonardo Cecchi, Eleonora Gaggero, Beatrice Vendramin, Saul Nanni, and Federico Russo and English actress, Olivia-Mai Barrett in the season special episodes.

James Gay-Rees is a British film producer. He has been involved in the production of numerous films, including critically acclaimed documentaries Senna (2010) and Amy (2015), for which he won numerous awards and nominations.

"Life Is a Long Song" is a song composed by Ian Anderson and first recorded by Jethro Tull. It was released as the lead track on an EP in July 1971, reaching No. 18 in the UK charts. It later appeared on the 1972 compilation album Living in the Past.