Thomas was the youngest in a family of twelve. His early education was in Dresden. [1] He tried to get into the Indian Civil Services but failed. He later wrote entrance exams to Sandhurst and Woolwich, passed but decided not to join the army. He passed the entrance for the Indian Woods and Forest Services and joined the services at Dharwad in 1884, as a Deputy Forest Officer. Here he was in touch with Edward Hamilton Aitken who was in the salt and excise department and James Davidson, collector of the district and along with these keen naturalists he began to study the Lepidoptera. [2] [3] [4] He also made collections of beetles which he passed on to H. E. Andrewes at the British Museum. He was in Sind between 1905 and 1906 but returned to Belgaum. Davidson had moved back to Edinburgh and he moved to live at Karwar, North Kanara District, Bombay, India. A series on the common butterflies of India was started in the Journal of the Bombay Natural History Society by L.C.H. Young, [5] but discontinued due to his ill-health. Walter Samuel Millard contacted Bell and suggested that he complete the series and Bell reluctantly took up this task. [6] He reared many lepidoptera specimens from larvae collected in the field and published on a variety of topics including a volume (1937) on the Sphingidae in The Fauna of British India, Including Ceylon and Burma in collaboration with Major F. B. Scott (who was in Assam). In 1911 he was made CIE. He became a Chief Conservator of Forests, Bombay Presidency in 1913, a position he held until his retirement in 1920. He worked on the grasses of the North Kanara region with L. J. Sedgwick, the collection now at St. Xavier's College in Bombay. Sedgwick and Bell founded the Journal of Indian Botany with P.F. Fyson as editor. [7] Later he also took an interest in the orchids and his sister made illustrations of them. He joined a timber business at Sawanthwadi along with a partner who left him with significant financial losses. In 1930 he gave his entire collection of insects to the British Museum. It had 3000 specimens of butterflies, 12000 moths, 1900 Coleoptera, 1720 Hymenoptera and 20 Orthoptera. [1] Several insect species have been described from his collections and named after Bell including:

Bell was unmarried and his sister Eva stayed with him for many years until her death in 1941. [1] 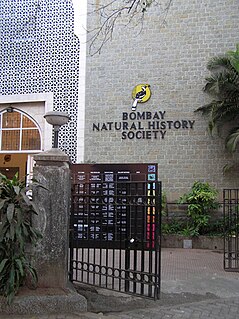 The Bombay Natural History Society (BNHS), founded on 15 September 1883, is one of the largest non-governmental organisations in India engaged in conservation and biodiversity research. It supports many research efforts through grants and publishes the Journal of the Bombay Natural History Society. Many prominent naturalists, including the ornithologists Sálim Ali and S. Dillon Ripley, have been associated with it. 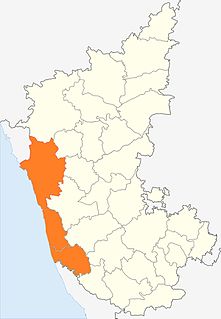 Kàrāvàlī, also known as Kanara or Canara in Indo-British English, is the a historically significant stretch of land situated by the southwestern coast of India, alongside the Arabian Sea in the present-day Indian state of Karnataka. The region comprises three civil districts, namely: Uttara Kannada, Udupi, and Dakshina Kannada.

Edward Hamilton Aitken was a civil servant in India, better known for his humorist writings on natural history in India and as a founding member of the Bombay Natural History Society. He was well known to Anglo-Indians by the pen-name of Eha.

Leptosia nina, the psyche, is a small butterfly of the family Pieridae and is found in Indian subcontinent, southeast Asia and Australia. The upper forewing has a black spot on a mainly white background. The flight is weak and erratic and the body of the butterfly bobs up and down as it beats its wings. They fly low over the grass and the butterfly rarely leaves the ground level.

Bibasis sena, commonly known as the orange-tailed awlet, is a butterfly belonging to the family Hesperiidae, the skippers. It is also sometimes called the pale green awlet though that name can also refer to Bibasis gomata.

Hasora vitta, the plain banded awl, is a butterfly belonging to the family Hesperiidae which is found in India and parts of Southeast Asia. 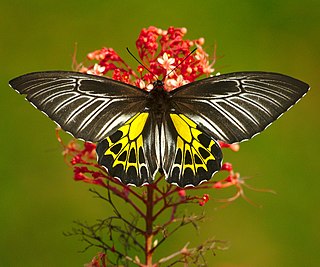 Papilio buddha, the Malabar banded peacock, is a species of swallowtail butterfly found in the Western Ghats of India. 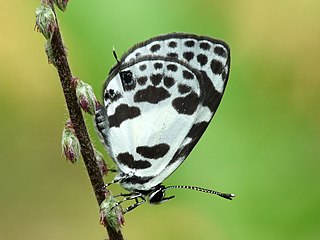 Discolampa ethion, the banded blue Pierrot, is a contrastingly marked butterfly found in South Asia that belongs to the blues or family Lycaenidae. The species was first described by John O. Westwood in 1851.

Idea malabarica, the Malabar tree nymph, is a large butterfly found in peninsular India. that belongs to the danaid group of the family Nymphalidae. It is found in forest clearings and above the forest canopy. 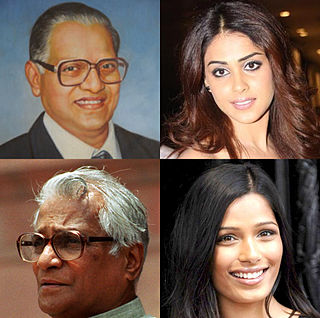 Mangalorean Catholics are an ethno-religious community of Indian Christians adhering to the Latin Rite of worship, from the Roman Catholic Diocese of Mangalore, by the southwestern coast of Carnataca. They are Konkani people and speak the Konkani language.

Taraka hamada, the forest Pierrot, is a small butterfly found in Asia, that belongs to the lycaenids family.

Tarucus ananda, the dark Pierrot, is a small butterfly found in India that belongs to the lycaenids or blues family. It was formerly placed in the genus Castalius, and with the delimitation of Castalius versus Tarucus being not fully resolved this may well be correct.

Yule Mervyn Charles McCann was a naturalist in India. He wrote a popular book on the trees of India and edited a major regional flora apart from publishing many of his other observations, mainly in the journal of the Bombay Natural History Society (BNHS) that he was associated with.

James Davidson FZS was a Scottish naturalist in colonial India. He studied birds and many aspects of Indian natural history during his career in the Indian Civil Service, mostly posted in the Bombay Presidency and central India.

Herbert Musgrave Phipson, was a British wine merchant and naturalist who lived in Bombay, India, from 1878 to 1905. As the honorary secretary of the Bombay Natural History Society, editor of its Journal, and manager of the Society's business and outreach activities, he played an important role in establishing the journal's reputation as the foremost natural history journal in Asia; he also influenced public science policy in the Bombay Presidency. His efforts saw fruition in the establishment of the Natural Sciences section of the Prince of Wales Museum of Western India. Phipson, who was married to the pioneering physician Edith Pechey-Phipson, co-founded, with his wife, the Pechey Phipson Sanitarium for Women and Children in Nasik, India.

Apporasa is a genus of butterflies in the family Lycaenidae, the blues. The genus is monotypic containing only Apporasa atkinsoni, the crenulate oakblue. It is found in the Indomalayan realm.

Leonard John Sedgwick was an Indian civil servant who worked in the Bombay Presidency and collected and described plants as an amateur botanist. His collections are held in St Xavier's College, Bombay.