Thomas “Thom” Reilly (born December 29, 1960) is an American academic, higher education chancellor, and public administrator. He is a professor in the School of Public Affairs and co-director for the Center for an Independent and Sustainable Democracy at Arizona State University. He is the former Chancellor of the Nevada System of Higher Education [1] [2] , chief executive officer/county manager for Clark County, Nevada, which includes the Las Vegas Valley. [3] and head of the child-welfare system for Nevada.

Reilly was born in Philadelphia, Pennsylvania, and grew up in Memphis, Tennessee, the third oldest of seven siblings. [4] He graduated from the University of Memphis in 1983 with a bachelor degree. He earned a master degree in social work from Arizona State University in 1986, and later attended the University of Southern California where he earned a master of public administration degree in 1997 and a doctor of public administration degree in 1998. [5]

Reilly has held a variety of roles in both the public and private sectors. He headed the Nevada child welfare system from 1991 to 1996. [4] Reilly served five years as county manager for Clark County in Nevada from 2001 to 2006, during which time he oversaw a budget of approximately $5.8 billion. [4] [6]

His private sector experience includes a role as corporate vice president for Social Responsibility for Harrah's Entertainment, from 2006 to 2007. He served as executive director of the Caesars Foundation from 2007 to 2017. [6]

Reilly was a professor and director of the School of Social Work at San Diego State University from 2008 to 2014. [7]

In 2014, Reilly was named director of the Morrison Institute for Public Policy at Arizona State University. During this time, he also was a professor in the university’s School of Public Affairs. [8]

Reilly serves on the board for the international NGO, [9] "Our Team - Global Outreach Doctors". and is on the Board of Directors for Children Action Alliance. He is a former member of the Nevada Supreme Court Blue Ribbon Commission on Child Welfare. [10] In November 2018, he was named as a member of Nevada Governor-elect Steve Sisolak’s transition advisory committee. [11]

He is a former member of the board of directors for Clean The World, and he previously served on the board for the Gay and Lesbian Alliance Against Defamation (GLAAD), including a stint as chair and secretary of the board. [12] [13] [14] He was elected as a Fellow of the National Academy of Public Administration (NAPA) in 2005. [15] [16]

In addition to publishing numerous articles in academic journals on the topics of public pay and benefits, child welfare, and governance, Reilly’s columns and op-eds have appeared in a variety of American publications, including NPR's "Here and Now," PBS NewsHour, CNN Money, ABC World News, “This Week with George Stephanopoulos”, Fox Business News, and in the Wall Street Journal, USA Today, Forbes, The Guardian, Law 360, Governing, Businessweek, The Fulcrum and The Associated Press,Governing, the Arizona Republic , the San Diego Union-Tribune , the Reno Gazette Journal , and the Las Vegas Sun . [17] [18] [19] [20] [21]

He has had three books published and authored several book chapters. In 2012, Rethinking Public Sector Compensation: What Ever Happened to the Public Interest?, Reilly’s first book, was published by M.E. Sharpe Publishing, Inc.,/Taylor & Francis Group. In 2016, Reilly’s second book – The Failure of Governance in Bell, California: Big Time Corruption in a Small Town – was published by Lexington Books, an imprint of The Rowman & Littlefield Publishing Group. [22] The Independent Voter (forthcoming September 2022) with co-authors Jackie Salit & Omar Ali is being published by Routledge Press (Francis & Taylor Group).

In 2016, Reilly received the Anti-Corruption Award from the New York City Independence Clubs, Inc., for his work in researching independent voters with the Morrison Institute for Public Policy. [24] 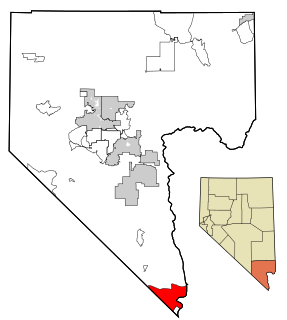 Laughlin is an unincorporated resort town and census-designated place in Clark County, Nevada, United States. It is located on the Colorado River, directly across from the much larger Bullhead City, Arizona. Laughlin lies 90 miles (140 km) south of Las Vegas, in the far southern tip of Nevada, and is known for its gaming and water recreation. As of the 2010 census, the population was 7,323. The nearby communities of Bullhead City, Arizona; Needles, California; Fort Mohave, Arizona; and Mohave Valley, Arizona, bring the area's total population to about 100,000. Laughlin is also 286 miles (460 km) northeast of Los Angeles. 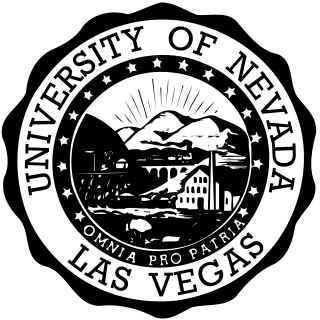 The University of Nevada, Las Vegas (UNLV) is a public land-grant research university in Paradise, Nevada. The 332-acre (134 ha) campus is about 1.6 mi (2.6 km) east of the Las Vegas Strip. It was formerly part of the University of Nevada from 1957 to 1969. It includes the Shadow Lane Campus, just east of the University Medical Center of Southern Nevada, which houses both School of Medicine and School of Dental Medicine. UNLV's law school, the William S. Boyd School of Law, is the only law school in the state.

The Nevada System of Higher Education is a state government unit in Nevada that oversees its public system of colleges and universities. It was formed in 1968 to oversee all state-supported higher education in the state. Two doctoral-granting research universities, one state college, four community colleges and one research institute comprise the land grant system. About 105,000 students attend the degree-granting campuses. 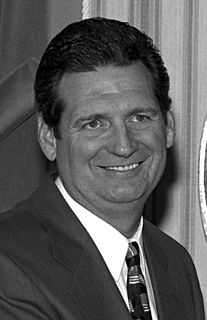 James Joseph Murren is an American businessman. He was the chairman and CEO of MGM Resorts International. He is a member of the National Infrastructure Advisory Council.

David Parks is an American politician from Las Vegas, Nevada. A Democrat, he served in the Nevada Senate for 12 years, representing the state's 7th district in Clark County. He was elected to the Senate in November 2008, prior to which he had served in the Nevada Assembly since 1996. He was term-limited in 2020 and did not run for re-election.

James E. Rogers was an American entrepreneur and former attorney. He served as interim chancellor of the Nevada System of Higher Education and the University of Arizona College of Law carries his name.

Justin Christopher Jones is an American attorney and politician. He is currently the Clark County Commissioner for District F since 2019 and served as a member of the Nevada Senate for the 9th district from 2012 to 2014. He is a member of the Democratic Party. 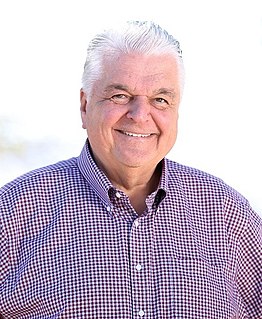 Stephen F. Sisolak is an American businessman and politician who has served as the 30th governor of Nevada since 2019. A member of the Democratic Party, he previously served on the Clark County Commission from 2009 to 2019 and on the Nevada Board of Regents from 1999 to 2008.

Blake L. Sartini is an American entrepreneur in the Nevada gaming and entertainment industry. 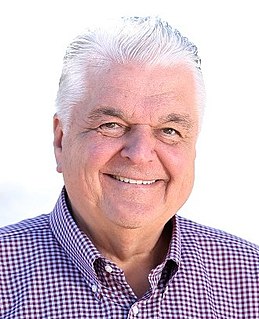 The 2018 Nevada gubernatorial election took place on November 6, 2018, to elect the next Governor of Nevada. Incumbent Republican Governor Brian Sandoval was ineligible to run for re-election, due to the absolute two-term limit established by the Nevada Constitution. Nevada is one of eight U.S. states that prohibits its governors or any other state and territorial executive branch officials from serving more than two terms, even if they are nonconsecutive.

Yvanna Cancela is an American politician who served as a member of the Nevada Senate for the 10th district from 2017 to 2021. She joined the Biden administration on January 20, 2021.

The 2022 Nevada gubernatorial election will take place on November 8, 2022, to elect the governor of Nevada. Incumbent Democratic Governor Steve Sisolak is running for re-election to a second term.

The Engelstad Foundation, a nonprofit 501(c)(3) organization, was established in June 2002 to continue the philanthropic efforts of Ralph Engelstad. It was originally developed with the purpose of promoting medical research, improving the lives of people living with disabilities and creating new possibilities for high-risk individuals. The Engelstad Foundation focuses its efforts on education, healthcare, disabled individuals and childhood issues, among other areas. The foundation controls about $800 million in assets and has given over $300 million in grants, scholarships and donations to a number of nonprofits and partners throughout the United States. 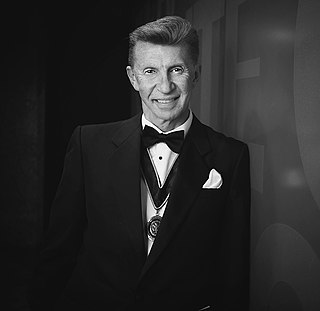 Edward A. Vance, FAIA, an American architect, is the principal-in-charge of design and CEO at EV&A Architects, a specialty architecture firm he founded in Las Vegas, Nevada in 2006. Vance has been a registered Architect in 19 states and is certified by the National Council of Architectural Registration Boards (NCARB). He served as the 2019 Chancellor of the American Institute of Architects College of Fellows.

The COVID-19 pandemic was confirmed to have reached the U.S. state of Nevada on March 5, 2020. Because of concerns about coronavirus disease 2019 (COVID-19), Nevada governor Steve Sisolak declared a state of emergency on March 12, 2020. Four days later, Nevada reported its first death. On March 17, 2020, Sisolak ordered the closure of non-essential businesses in the state, to help prevent the spread of the coronavirus. Grocery stores were among the businesses considered essential, and restaurants were allowed to provide drive-thru, takeout, and delivery services. At the end of March 2020, Sisolak announced a 90-day moratorium on evictions and foreclosures for commercial and residential tenants. The moratorium would be extended several times over the next year.

Keith Whitfield is an American psychologist, educator and gerontologist, is the President of University of Nevada-Las Vegas. He became the 11th and first black president of the University when he was appointed on August 24, 2020. Prior to the position, he was the Provost and Senior Vice President of Academic Affairs and a professor of Psychology at Wayne State University.

The following is a timeline of the COVID-19 pandemic in Nevada.