Sara Renner is a Canadian cross-country skier who competed from 1994 to 2010. With Beckie Scott, she won the silver medal in the team sprint event at the 2006 Winter Olympics in Turin and earned her best individual finish of eight in the 10 km classical event in those same games. She was born in Golden, British Columbia. 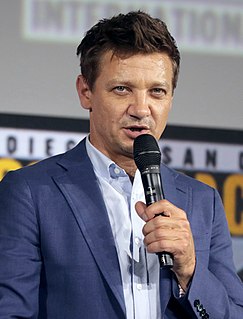 Jeremy Lee Renner is an American actor, musician and songwriter. He began his career by appearing in independent films such as Dahmer (2002) and Neo Ned (2005). Renner earned supporting roles in bigger films, such as S.W.A.T. (2003) and 28 Weeks Later (2007). Renner was nominated for the Academy Award for Best Actor for his performance in The Hurt Locker (2008) and for the Academy Award for Best Supporting Actor for his performance in The Town (2010). His films have grossed over $3.5 billion in North America and over $9.8 billion worldwide, making him one of the highest-grossing box-office stars of all time.

Gregory Thomas Yelavich is a competitive pistol shooter from Auckland, New Zealand. As well as winning numerous national pistol titles, Yelavich has the distinction of having won more Commonwealth Games medals than any other New Zealander (12). He was the New Zealand flag bearer at the closing ceremony of the 2006 Commonwealth Games. He has represented New Zealand at two Olympic Games — Seoul 1988 and Barcelona 1992.

The men's 3000 metres steeplechase at the 1984 Summer Olympics in Los Angeles, California had an entry list of 35 competitors, with three qualifying heats and two semifinals (24) before the final (12) took place.

Andreas Berger is a former Austrian track and field sprinter, who ran in the 100m and 200m. In 1993 he tested positive for the banned steroid Metandienone, together with his teammates Franz Ratzenberger, Thomas Renner, and Gernot Kellermayr, and was banned from competition for two years.

Peter Campbell Renner is a retired New Zealand track and field athlete from Mosgiel, New Zealand who mostly competed in the 3000 metres steeplechase. Renner competed at the 1984 Summer Olympics in Los Angeles and the 1982, 1986 and 1990 Commonwealth Games and holds the national and Oceania record of 8:14.05 for the 3000m Steeplechase.

The 1944 Michigan Wolverines football team represented the University of Michigan in the 1944 Big Ten Conference football season. Under seventh-year head coach Fritz Crisler, Michigan compiled a record of 8–2, outscored opponents 204 to 91, finished in second place in the Big Nine Conference, and was ranked #8 in the final AP Poll. The team opened the season with a victory over an Iowa-Pre-Flight team that won all of its remaining games and ended the season ranked #6 in the final AP Poll. The Wolverines then shut out four opponents: Marquette (14-0); Northwestern (27-0); Illinois (14-0); and Wisconsin (14-0). The team's two losses came against Indiana and an undefeated Ohio State team that was ranked #2 in the final AP Poll.

Gernot Kellermayr is a retired decathlete from Austria. He competed at the 1992 Summer Olympics.

Willy Monty was a Belgian racing cyclist. He competed in the team time trial at the 1960 Summer Olympics. Monty won a stage in the Dauphiné Libéré in 1964 and two stages in the Volta a Catalunya in 1965.

Stefan Maurer was a Swiss cyclist. He competed in the individual road race event at the 1984 Summer Olympics. He drowned in a diving accident in Thailand in 1994.

Ingeborg Renner is a German former swimmer. She competed in two events at the 1968 Summer Olympics.