Richardson was born at Hardwick, Depwade Hundred, Norfolk, and was baptised there on 3 July 1569, the son of William Richardson whose family were said to be descended from the younger son of a Norman family, John, who moved to county Durham in about 1100. Other branches of the family included the Richardsons of the Briary in county Durham, and the Richardsons of Glanbrydan Park and Pantygwydr, Wales. However the History of Parliament biography of his grandson states that he was "of Norfolk peasant stock". [2] The coat of arms he used (Argent, on a chief sable three lion's heads erased of the first) was certainly that of the ancient gentry family of Richardson, of many branches. [3] He was educated at Norwich School, [4] and matriculated at Christ's College, Cambridge in June 1584. [5] On 5 March 1587 he was admitted a student at Lincoln's Inn, where he was called to the bar on 28 January 1595. In about 1600 he purchased the estate of Honingham in Norfolk, which he made his seat. [2]

In 1605 he was deputy steward to the dean and chapter of Norwich, around which time he built Honingham Hall. [6] He was subsequently recorder of Bury St. Edmunds and then Norwich. In 1614, he was Lent Reader at Lincoln's Inn, and on 13 October of the same year became serjeant-at-law. At about the same time he was made chancellor to the queen.

Speaker of the House of Commons

In 1621, Richardson was elected Member of Parliament for St Albans. [7] When parliament met on 30 January 1621, he was chosen Speaker of the House of Commons. The excuses which he made before accepting this office appear to have been more than formal, for an eye-witness reports that he 'wept downright.' On 25 March 1621 he was knighted at Whitehall when he brought King James congratulations of the commons upon the recent censure of Sir Giles Mompesson. In the chair he proved a veritable King Log and his term of office was marked by the degradation of Bacon. He was not re-elected to parliament in the next election.

On 20 February 1625 Richardson was made king's serjeant. On 28 November 1626 he succeeded Sir Henry Hobart as Chief Justice of the Common Pleas, after a vacancy of nearly a year. His advancement was said to have cost him £17,000 and his second marriage (see infra). He judged on 13 November 1628, that it was illegal to use the rack to elicit confession from Felton, the murderer of Duke of Buckingham's. His opinion had the concurrence of his colleagues and marks a significant point in the history of English criminal jurisprudence. In the following December he presided at the trial of three of the Jesuits arrested in Clerkenwell, and secured the acquittal of two of them by requiring proof, which was not forthcoming, of their orders.

In the same year he took part in the careful review of the law of constructive treason This arose from the case of Hugh Pine who was charged with that crime for speaking words that were derogatory to the king's majesty. The result of Richardsons's review was to limit the offence to cases of imagining the king's death. He concurred in the guarded and somewhat evasive opinion on the extent of privilege of parliament which the king elicited from the judges after the turbulent scenes which preceded the dissolution of parliament on 4 March 1629. He was as lenient as he could be when he imposed a fine of £500 without imprisonment in the case of Richard Chambers, and his agreement with harsh sentences passed upon Alexander Leighton and William Prynne may have been dictated by timidity, and there contrast strongly with the tenderness which he showed Henry Sherfield, the iconoclastic bencher of Lincoln's Inn.

Chief Justice of the King’s Bench

Richardson was advanced to the chief-justiceship of the king's bench on 24 October 1631, and served on the western circuit. He was not a puritan but in Lent 1632 he made and order, at the instance of the Somerset magistrates, for suppressing the 'wakes' or Sunday revels, which were a fertile source of crime in the county. He directed the order to be read in church and this brought him into conflict with Laud, who sent for him and told him it was the king's pleasure he should rescind the order. Richardson ignored this instruction until the king himself repeated it. He then, at the ensuing summer Assizes (1633), laid the matter fairly before the justices and grand jury, professing his inability to comply with the royal mandate on the ground that the order had been made by the joint consent of the whole bench, and was in fact a mere confirmation and enlargement of similar orders made in the county since the time of Queen Elizabeth, all which he substantiated from the county records. This caused him to be cited before the council, reprimanded, and transferred to the Essex circuit. 'I am like,' he muttered as he left the council board, 'to be choked with the archbishop's lawn sleeves.'

Richardson died at his house in Chancery Lane on 4 February 1635 and was buried in the north aisle of the choir of Westminster Abbey, beneath a marble monument. There is a bust by Hubert Le Sueur.

Richardson was a capable lawyer and a weak man, much addicted to flouts and jeers. 'Let him have the Book of Martyrs' he said, when the question whether Prynne should be allowed the use of books was before the court; 'for the puritans do account him a martyr.' He could also make a caustic jest at his own expense. 'You see now’ he dryly remarked, as he avoided a missile aimed at him by a condemned felon by stooping low, 'if I had been an upright judge I had been slain.' He possessed some polite learning, which caused John Taylor, the water poet, to dedicate to him one of the impressions of his Superbiae Flagellum (1621). 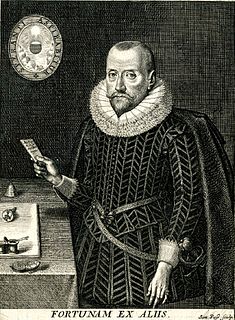 Sir Robert Naunton was an English writer and politician who sat in the House of Commons at various times between 1606 and 1626.

Sir John Suckling was an English politician who sat in the House of Commons at various times between 1601 and 1627. 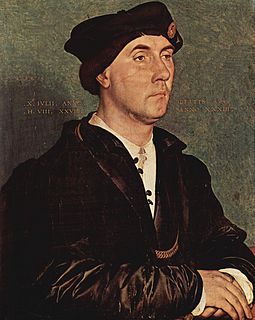 The Court of Wards and Liveries was a court established during the reign of Henry VIII in England. Its purpose was to administer a system of feudal dues; but as well as the revenue collection, the court was also responsible for wardship and livery issues.

Sir Henry Bedingfeld (1505–1583), also spelled Bedingfield, of Oxburgh Hall, King's Lynn, Norfolk, was a Privy Councillor to King Edward VI and Queen Mary I, Lieutenant of the Tower of London, and Vice-Chamberlain of the Household and Captain of the guards. With Sir Henry Jerningham he was among the principals who rallied to Mary's cause following the death of Edward VI in 1553 and helped to set her upon the throne. He was a senior figure in the kinship group of Catholic recusant landowning knights of Suffolk. Given responsibility for the custody of Mary I's half-sister Elizabeth when in the Tower of London and at Woodstock, his reputation has suffered from the repetition of claims of his severity towards her: however Queen Elizabeth was respectful towards him and continued to find service for him. Among the foremost Englishmen of his time, he occupied prominent and honourable positions and was of unquestioned loyalty. 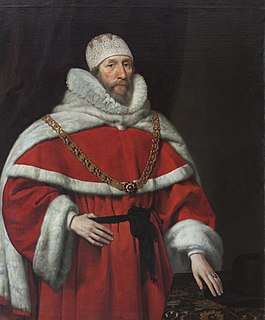 Elizabeth Richardson, 1st Lady Cramond was an English writer and peeress. She is remembered for her collections of prayers.

Sir William Boleyn of Blickling Hall in Norfolk and Hever Castle in Kent, was a wealthy and powerful landowner who served as Sheriff of Kent in 1489 and as Sheriff of Norfolk and Suffolk in 1500. He was the father of Thomas Boleyn, 1st Earl of Wiltshire, whose daughter was Queen Anne Boleyn, the second wife of King Henry VIII.

Anne Shelton née Boleyn was a sister of Thomas Boleyn, 1st Earl of Wiltshire, and one of the aunts of his daughter, Queen Anne Boleyn, the second wife of King Henry VIII.

Sir Robert Southwell was an English civil servant during the reigns of Henry VIII, Edward VI and Mary I. He was elected Member of Parliament from Kent in October 1553 and in 1555. In January–February 1554 Southwell, then the High Sheriff of Kent, was one of the key loyalist officers engaged against the Wyatt's rebellion. According to D. M. Loades, "Sir Robert Southwell and Lord Abergavenny were almost the only significant gentlemen in the country whose loyalty was never in doubt. So resolute was Southwell's opposition to Wyatt that it is tempting to regard them as personal enemies, but .. there is no evidence for this."

William Barnham was a mayor of Norwich and an English politician who sat in the House of Commons in 1659 and 1660.

Sir Edward Rodney was an English politician who sat in the House of Commons at various times between 1621 and 1642.

Sir Francis Ashley was an English lawyer and politician who sat in the House of Commons at various times between 1614 and 1625. 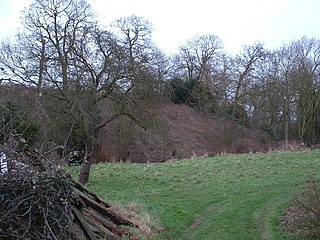 Sir Edmund Knyvet was the eldest son of Sir Thomas Knyvet, a distinguished courtier and sea captain, and Muriel Howard, the daughter of Thomas Howard, 2nd Duke of Norfolk.

Sir Nevill Catlin (1634–1702) of Kirby Cane in Norfolk and of Wingfield Castle in Suffolk, England, was a landowner and member of Parliament from a Norfolk family long active in local and national affairs.

Sir Robert Wood of Norwich, Norfolk, was an English politician.

Sir Thomas Le Strange (1494–1545) of Hunstanton, Norfolk, born in 1494, son of Robert le Strange, sixth in descent from Hamo le Strange, brother of John le Strange, 6th Baron of Knockyn, was Esquire of the Body to Henry VIII, and attended the King when he went to the Field of the Cloth of Gold in 1520; he was knighted by Henry at Whitehall in 1529, and served as High Sheriff of Norfolk in 1532. Extracts from the Household Accounts kept at Hunstanton in the time of Sir Thomas and his successor, from 1519 to 1578, were published in the Archæologia for 1833. Sir Thomas was in attendance on Anne Boleyn at her coronation in 1533, her father, Sir Thomas Boleyn, being a Norfolk neighbour, who is mentioned repeatedly in the above accounts as a visitor at Hunstanton. In 1536 Sir Thomas Le Strange was appointed to attend on the King's person during the Pilgrimage of Grace, and to bring fifty men with him; in July of that year he was placed on the commission to inquire into the revenues of the wealthy abbey of Walsingham, near his own Norfolk estate. It is to his credit that, though a personal friend of the King, and employed on business connected with the Dissolution of the Monasteries, Sir Thomas does not appear to have used his influence at court to secure for himself any church lands whatever. His picture, by Holbein, hung at Hunstanton Hall in 1893, according to his descendant Hamon le Strange, and a pencil sketch of him is among the Holbein drawings at Windsor; both these were exhibited at the Tudor Exhibition in 1890.