Wuppertaler SV is a German association football club located in Wuppertal, North Rhine-Westphalia. The city was founded in 1929 out of the union of a number of smaller towns including Elberfeld, Barmen, Vohwinkel, Cronenberg and Ronsdorf – each with its own football club. Wuppertal Sport Verein was formed in 1954 out of the merger of TSG Vohwinkel and SSV Wuppertal and was later joined by Borussia Wuppertal to form the present day club. In addition to the football side, today's sports club includes departments for boxing, gymnastics, handball, and track and field.

The Regionalliga West/Südwest was the third tier of the German football league system in the states of Saarland, Rheinland-Pfalz and Nordrhein-Westfalen from 1994 to 2000.

The Oberliga Nordrhein was the highest Football League in the region of Nordrhein which is part of the state of North Rhine-Westphalia from 1978 to 2008. In its last season, it was one of nine Oberligas in German football, the 4th tier of the German football league system. In 2008, it was replaced by the NRW-Liga, a new statewide league.

Willibald Kreß was a German footballer who participated at the 1934 FIFA World Cup. He played club football with Rot-Weiß Frankfurt and Dresdner SC. In 1932, he was signed by FC Mulhouse but couldn´t play a league match because of a DFB suspension. He later managed FSV Frankfurt and Wuppertaler SV.

Dimitrios Grammozis is a Greek former professional football midfielder and the manager of SV Darmstadt 98. During his playing years, he was known as a versatile defender and defensive midfielder.

Michael Stuckmann is a German football player, who plays for SpVgg Sterkrade.

Bahadir Incilli is a German football player, who currently plays for 1. FC Monheim.

Romas Dressler is a German footballer who plays for 1. FC Bocholt.

Alfred Beck was a German footballer who played as a forward.

The 1974–75 season was the first time Tennis Borussia Berlin played in the Fußball-Bundesliga, the highest tier of the German football league system. After 34 league games, Tennis Borussia finished in 17th position, second from the bottom of the table, only one place above Wuppertaler SV. The club reached the fourth round of the DFB-Pokal; eventually losing 2–1 away to VfB Stuttgart II. Thirteen of their 38 league goals were scored by striker Norbert Stolzenburg.

Peter Nover is a retired football defender who played in the 2. Bundesliga, North American Soccer League and Mexican Primera División.

Fabian Schnellhardt is a German footballer who plays as a midfielder for SV Darmstadt. 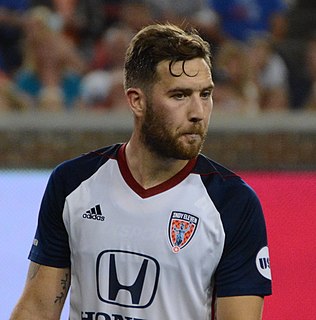 Nico Matern is a German professional footballer who currently plays for VfB Oldenburg. He played futsal for Hamburg Panthers.

Johannes Meier is a German former footballer who played as a defender.