He first kept a coffee house in Wood Street, off Cheapside, London and in 1705 was admitted to the Carpenter's Company. An ex-carpenter, he rose by degrees to become an architect and Surveyor in the royal Office of Works. He was influenced by the Palladian style, but never lost his provincial manner, which earned the private derision of Sir John Vanbrugh and the public scorn of Alexander Pope.

His works include Houghton Hall for Sir Robert Walpole, which was first designed by the Palladian architects Colen Campbell and William Kent. These designs were greatly altered by Ripley. [1]

His appointment in 1715 as Labourer in Trust at the Savoy marked the beginning of his continuous rise through the Office of the King's works. In 1721 he succeeded Grinling Gibbons as "Master Carpenter" and in 1726 he succeeded Vanbrugh as Comptroller of the King's Works, largely to the influence of Walpole. Walpole also engineered an additional appointment as Surveyor of Greenwich Hospital which was completed by him.

Buildings for the Office of Works included the Custom House (1718) and the Admiralty (1723–6), known as the Ripley Building, in London as well as the Queen Mary Block and chapel at Greenwich from 1729–1750. In 1739 he was collaborating with William Kent on designs for the New Houses of Parliament and between 1750–54 he made a great number of changes to Kent's designs for the Horse Guards.

His appointment as executant architect at Houghton was the first of a number of Walpole commissions. Here his responsibility for the applied portico and the opening of the colonnades to the garden on the west side demonstrated that he was more than a project manager. From 1725 he designed and built Wolterton Hall in Norfolk for Sir Robert's younger brother Horatio, the 1st Lord Walpole and was chiefly responsible for converting a formal park into a naturalised landscape. [2] Until 1731 he was in charge of the major alterations at Raynham for the Townshend family. [3]

Ripley was also involved in various speculative adventures, mainly in central London. In 1726 he was the original lessee of the west side of Grosvenor Square, and although his contribution there was limited to 16 Grosvenor Street he built a number of other houses in central London. Ripley was active in promoting the scheme to build Westminster Bridge and was also involved in Richard Holt's failed attempt to develop artificial stone. Nevertheless, he seems to have been an eager investor, being one of the few to make a fortune out of the South Sea Bubble.

Despite the dull and sometimes ill-proportioned character of his public buildings, his pragmatic approach and undoubted skill at managing large projects ensured that Greenwich was completed and fulfilled its function. Ripley always retained a craftsman's concern for practicality. At his masterpiece at Wolterton this resulted in a building of controlled austerity which demonstrated how convenience and dignity could be achieved through subtle planning. Wolterton's ground plan anticipates those of many villas of the 1750s.[ citation needed ]

He was buried in Hampton, but no memorial survives. A portrait by Joseph Highmore is in the National Portrait Gallery and his Mastership of the Carpenter's Company (1742–3) is commemorated by a plaque at the Guildhall, London. 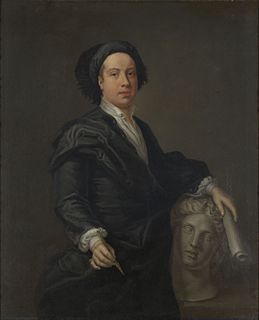 William Kent was an English architect, landscape architect, painter and furniture designer of the early 18th century. He began his career as a painter, and became Principal Painter in Ordinary or court painter, but his real talent was for design in various media. 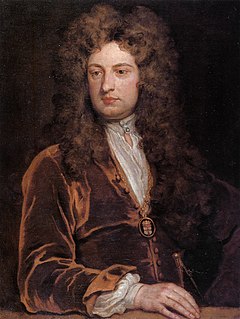 Sir John Vanbrugh was an English architect, dramatist and herald, perhaps best known as the designer of Blenheim Palace and Castle Howard. He wrote two argumentative and outspoken Restoration comedies, The Relapse (1696) and The Provoked Wife (1697), which have become enduring stage favourites but originally occasioned much controversy. He was knighted in 1714. 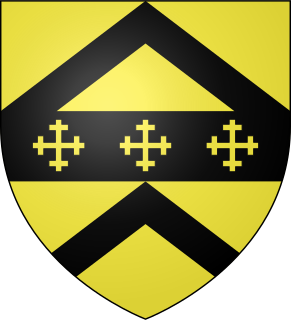 Baron Walpole of Walpole in the County of Norfolk, is a title in the Peerage of Great Britain.

Charles Bridgeman (1690–1738) was an English garden designer who helped pioneer the naturalistic landscape style. Although he was a key figure in the transition of English garden design from the Anglo-Dutch formality of patterned parterres and avenues to a freer style that incorporated formal, structural and wilderness elements, Bridgeman's innovations in English landscape architecture have been somewhat eclipsed by the work of his more famous successors, William Kent and Lancelot "Capability" Brown.

Colen Campbell was a pioneering Scottish architect and architectural writer, credited as a founder of the Georgian style. For most of his career, he resided in Italy and England. As well as his architectural designs he is known for Vitruvius Britannicus, three volumes of high-quality engravings showing the great houses of the time.

William Sawrey Gilpin was an English artist and drawing master, and in later life a landscape designer.

Houghton Hall is a country house in the parish of Houghton in Norfolk, England. It is the residence of David Cholmondeley, 7th Marquess of Cholmondeley.

Wolterton Hall, is a large country house in the ecclesiastical parish of Wickmere with Wolterton and the civil parish of Wickmere in the English county of Norfolk, England, United Kingdom. The present hall was commissioned by the 1st Lord Walpole of Wolterton and completed in 1742, it was designed by the architect Thomas Ripley who was a protégé of Lord Walpole and his brother Sir Robert Walpole.

Wickmere is a village and a civil parish in the English county of Norfolk, 18.9 miles (30.4 km) north of Norwich, 7.3 miles (11.7 km) south-southwest of Cromer and 132 miles (212 km) northeast of London. The nearest railway station is at Gunton for the Bittern Line which runs between Sheringham, Cromer and Norwich. The nearest airport is Norwich International Airport. In the 2001 census it had a population of 125, which increased to 158 at the 2011 census. For the purposes of local government, the it falls within the district of North Norfolk.

George Walpole, 3rd Earl of Orford was a British administrator, politician, and peer.

The Walpole family is a famous English aristocratic family known for their 18th century political influence and for building notable country houses including Houghton Hall. Heads of this family have traditionally been the Earl of Orford. Robert Walpole, 10th Baron Walpole resided at Mannington Hall. Wolterton Hall has been undergoing restoration since 2016.

The Brown Lady of Raynham Hall is a ghost that reportedly haunts Raynham Hall in Norfolk, England. It became one of the most famous hauntings in the United Kingdom when photographers from Country Life magazine claimed to have captured its image. The "Brown Lady" is so named because of the brown brocade dress it is claimed she wears.

Galfridus Walpole was a Royal Navy officer, politician and postmaster general of the Kingdom of Great Britain. He lost his right arm after a naval battle against the French in Vado Bay, Italy, in 1711 and commanded ships for another nine years. He sat in the House of Commons from 1715 to 1721, when he took office as joint postmaster general.

Mannington Hall is a moated medieval country house in the civil parish of Itteringham near the village of the same name and is in the English county of Norfolk within the United Kingdom. The first manor house built on this site was constructed in the 15th century. Having been owned by the Walpole family since the 18th century, it is now the seat of Robert Walpole, 10th Baron Walpole.